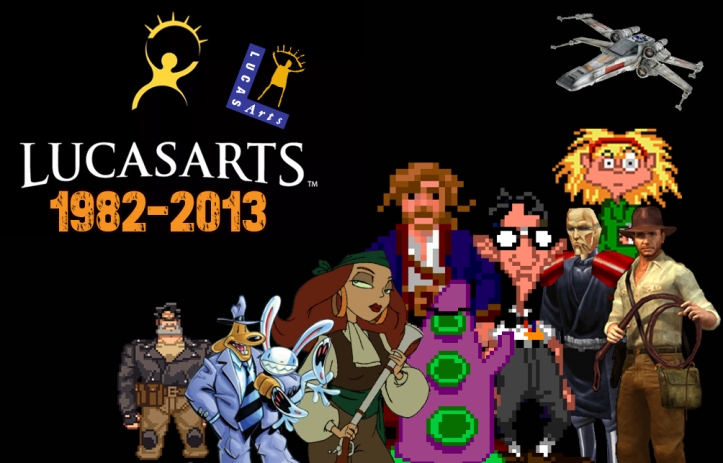 The early to mid-nineties was when my love of gaming was established. While everyone else was playing on their consoles, I was in love with my PC, and one games company in particular.

LucasArts was responsible for some of the greatest games I ever played. From their excellent Star Wars games to point and click masterpieces such as Monkey Island, Grim Fandango, Sam & Max and Day of the Tentacle.

In 2013, when Disney took control of the Lucas empire, LucasArts days were numbered. The takeover saw massive staff layoffs and all games in development scrapped. While it still continues today, as a video game licensor, it no longer operates in its previous capacity.

Because of LucasArts, I am a gamer. And I will be forever grateful for this. So what better way to honour their glory days than by showcasing some of their greatest games. Never heard of or played any of the games I am about to mention? Let me tell you why you should!

Note: This ‘Top 5’ list takes one game from each franchise or solo game. It is to showcase a range of games and is not my definitive personal ranking.

Probably my favourite video game of all time.

While it was not LucasArts first venture into the ‘point and click’ genre, it was the game that ‘launched a thousand ships’ in terms of its impact on the industry. The early nineties was a golden era for ‘point and click’, and with games like Monkey Island leading the charge, it’s obvious to see why.

Taking inspiration from Disney’s ‘Pirates of the Caribbean’ ride, the game sees the hapless Guybrush Threepwood begin his quest to become a fully fledged pirate. But standing in his way is the ghost pirate LeChuck. I love this game because it is full of fantastic characters and humour, all coupled together inside a well-constructed game design. The puzzles are challenging but enjoyable.

Finally. In an industry where female characters are over-sexualised and underrepresented, Governor Elaine Marley was a hugely important character. Having a feminist character in a 90s video game was groundbreaking. If only we had more of that today. 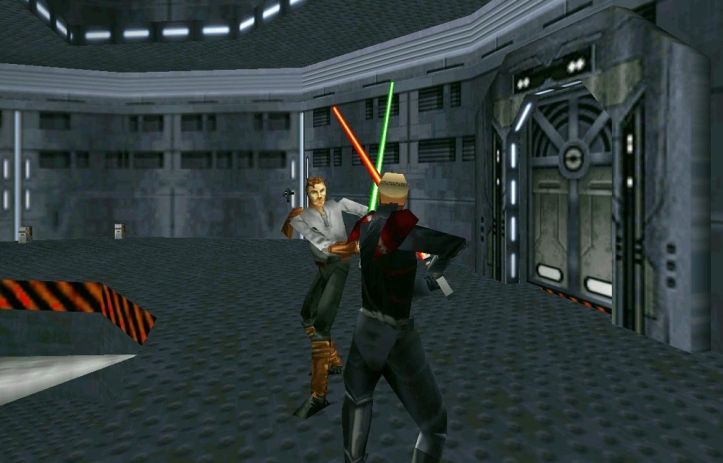 The greatest Star Wars game I’ve ever played featuring my favourite Star Wars character, Kyle Katarn. Dark Forces II is one of the greatest gaming experiences of my life.

Sure, being a Star Wars property helps, but it was the engaging story, fantastic characters and fun game design that makes Dark Forces II an outstanding gaming experience.

Offering both first and third-person views, as Kyle, you work your way through countless levels using a variety of weapons (blasters & lightsaber) as well as making use of a whole host of force powers. You can tailor the game to suit your gameplay style. Run and gun or go full Jedi.

The game uses full motion video cutscenes and your actions determine both a dark and light ending. Packed full of puzzles and classic Star Wars imagery, if you have never played a Star Wars game, I highly recommend you start with Dark Forces II.

Day of the Tentacle is the sequel to Ron Gilbert & Gary Winnick’s Maniac Mansion (1987). Winnick returns on writing duties to keep that consistency.

The detail and design of DOTT have stood the test of time. The sheer craftsmanship put into this game is truly outstanding. The puzzles are not only some of the greatest in ‘point and click’ history, they also transcend time. Having to switch between three different characters to complete a range of varying puzzles was such a fun process. The way all the puzzles and objects linked together was so expertly done. It is one of the greatest ‘point and click’ games ever created.

Once again the SCUMM engine is utilised and I don’t think I will ever tired of using the classic ‘OPEN. CLOSE. PICK UP. GIVE’ commands.

As with most LucasArts ‘point and click’ games, the characters, humour and story are outstanding. It all adds to the mix of this truly great game.

This first-person shooter may have missed most people. It never really got the awareness I feel it deserved.

You play as U.S. Marshal James Anderson, a man on the hunt of a band of outlaws who murdered his wife and kidnapped his daughter. Classic ‘Wild West’ And it’s the well-executed ‘Wild West’ design, characters and story that makes this game so fun to play.

This game felt like a cinematic experience. From brilliant cutscenes to breathtaking music, the game captures all the classic elements of a Sergio Leone movie and puts you right in the middle of it.

The gameplay does enough to stay varied as you progress through the levels. It also features the sniper zoom, one of the first video games to use this function to its potential. So it really was one of the early trailblazers in terms of a more advanced first-person shooter.

Indiana Jones and the Infernal Machine (1999)

When it comes to PC Indiana Jones games, most will jump straight to Indiana Jones and the Fate of Atlantis (1992). Using the classic ‘SCUMM’ engine, it mixed puzzles with action and adventure tropes. But as good as it was the most enjoyable Indiana Jones game for me is ‘The Infernal Machine‘.

This third-person, fully 3D world mixes the action and adventure that we’ve come to expect from the films but in a video game setting. Despite the new inclusion of ‘running and jumping’ gameplay, the puzzles are still a big part of the franchise and vary a lot in this game. Yes, you can run around shooting Soviets, but you still need to engage your brain and use some logic to work out some of the game’s puzzles.

The Infernal Machine’s game and level design are one of it’s strongest factors, featuring some truly amazing locations. The varied gameplay style ensures that you’ll never get tired of the game as you play through the different levels. The story is really exciting and takes many twists and turns along the way.

Finally, one of my favourite little Easter Eggs is that if you entered the console command mode and typed in MAKEMEAPIRATE it would turn you into Guybrush Threepwood from the Monkey Island series. There were lots of LucasArts crossovers and winks in a lot of their games. I miss it.

So there you have it. My Top 5 picks for the best LucasArts games.

Be sure to keep an eye out for future articles covering LucasArts games including our examination of the Monkey Island, Star Wars and Indiana Jones series.

What is your favourite LucasArts game? Let us know in the comments.