Game of Thrones S8:E2 – ‘A Knight of the Seven Kingdoms’ Review 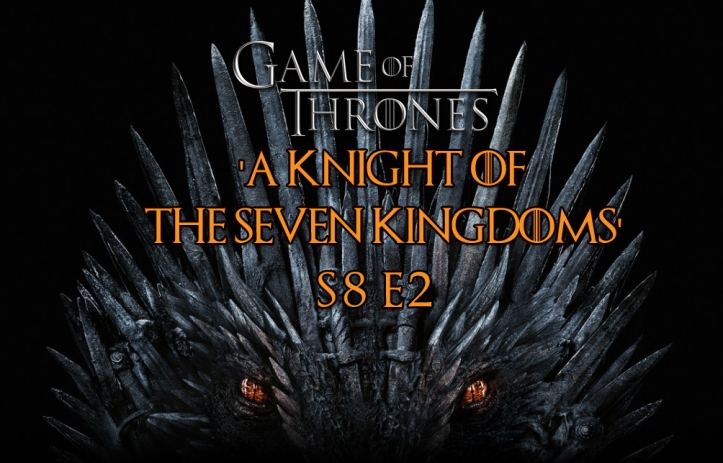 I’ll start by saying that this was easily one of my favourite episodes of all time. Again, like last week, it was packed full of dialogue and interactions, but all these moments felt earned and had such a satisfying payoff. Story arcs that were years in the making have come to an end, allowing us to shift focus onto the massive battle next week. They needed to do this as many of these characters are likely to die! Some might see another ‘talky’ episode as a negative, but it was done in such a way that it was exciting and enjoyable. They have that balance nailed on so we can get the best of both worlds.

The main theme for this episode was ‘look at where we are now/how far we’ve come”.  It was all about tying up loose story ends and reflecting on the past and how it has shaped the characters into their current state. We got plenty of character interactions and reunions, including packing one scene in particular with the bulk of the main cast. It was so good to see. It was also great to spend the entire episode in one location, Winterfell. So, let’s talk about what happened! 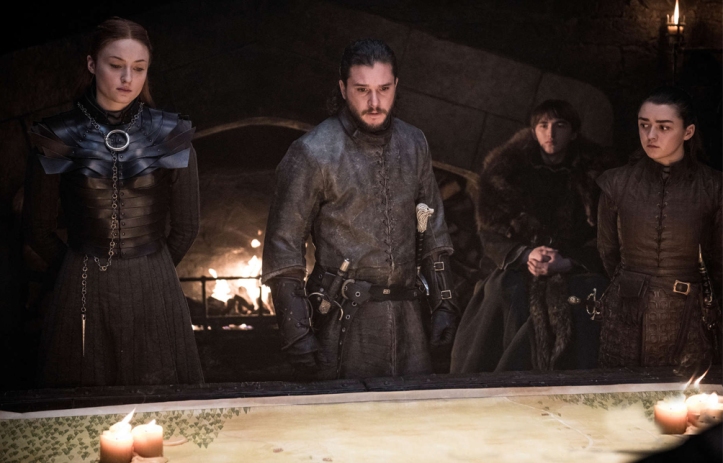 There was no waiting around this week, the episode got straight to work, with Jaime facing the council and Daenerys. Jaime informs her that Cersei is not coming and that it is only him. Both Daenerys and Sansa clearly want him dead, for their own reasons. She even dismisses Tyrion’s advice, and just when you think it’s not looking good for Jaime, Brienne steps up to the plate. She manages to convince Sansa, and Jon states that they need the numbers. Clearly, Daenerys is not happy about this, and this would be the first of many little suggestions in this episode, that we might see a big change in her character going forward. My favourite part here was Bran’s line of “The things we do for love”, which was a reference to the first-ever episode, which saw Jaime saying those words before pushing you Bran out of the window. This was such an intense scene, it was great.

I mentioned Daenerys being seeded for a possible character change, and in the follow-up scene, we saw another example of this. Daenerys is mad at Tyrion, with Tyrion suggesting that his position as Hand may soon be given to someone else. Daenerys is showing that classic Targaryen temperament, and even when Jon tells Daenerys the truth about his heritage, the first thing she asks is about the throne. So, not about how this changes their relationship or love, but a throne, a right of rule. This may have been a subtle way of saying that Daenerys could eventually, possibly, become some sort of antagonist. I might be totally wrong about this, and I think I am, but there’s enough there to suggest that it could be one route to go down. And in all honesty, if they did? It might finally make me enjoy her character!

Staying with Daenerys, she would soon turn her attention to Sansa. Now, these are two characters who, if you’ve followed my reviews, that I don’t enjoy. But Sansa had a strong episode. And this is probably the most I’ve enjoyed her. Not only did she hold her own with Daenerys, but when Theon arrived, her reaction was tremendous. I give Sophie Turner a lot of flack, but I thought she was simply amazing in this scene. I’m also glad that Theon, who once took the castle from Bran, is now going to protect him in the Godswood. And speaking of the Godswood, we finally got a one-on-one with Jaime and Bran. Bran continues to be in full Creep Mode, but it’s fine. It’s funny.

I have two scenes that I enjoyed the most in this episode, the main one I’ll talk about further down, but to start with I want to mention my second favourite. This was the Night’s Watch reunion. Seeing Jon, Sam and Ed stood on the battlements gave me so many happy memories. What a trio. Ed was great here and I loved the line about it truly being the end of things if Sam is killing White Walkers and sleeping with a woman. These young boys have all been on their separate journeys, and now, in the end, they stand together one more time as men. This, like many others, again hammers home this sense of journeys coming full circle and tying off loose ends. As powerful and reward as some of these scenes were, there was one that did have me squirming on my sofa a little…

Gendry and Arya continued their awkward flirting. When Gendry brings Arya’s new weapon, as happy as she is to have it, she clearly has her eyes set on another weapon. Gendry’s. Now, I know Maisie Williams has done sex scenes in other projects, but having her strip down to flash some side-boob and then straddle Gendry was more awkward, for me personally than their flirting. I don’t know why, but in the context of the show, I still see her as this little girl from Season One. As painful as this was for me to watch, I’m glad they had this moment. She would also go on to have a one-on-one with The Hound which was fantastic. The pair have such great chemistry. Despite all these great moments, there was one that really stood head and shoulders above the rest.

In front of the fire, Jaime and Tyrion are reminiscing. They are joined by Brienne and Podrick, then later joined by Davos and Tormund. I loved this idea of ‘sitting around the campfire’ telling old war stories. We had throwbacks, resolutions, humour (thanks to Tormund and his suckling) and one of the most touching and emotional scenes I’ve witnessed on the show. They start talking about knighthoods, with Tormund confused as to why Brienne isn’t a knight. Jaime asks her to take a knee and knights her. I’ll freely admit I teared up more than Brienne! Jaime and Brienne have one of the most fascinating and well-worked relationships on the show. This scene was not too dissimilar to Pippin singing “The Edge of Night” in Lord of the Rings: The Two Towers. You had this emotional, haunting song, sung by Pod, layered over the top of all these characters in their current moments, right before something bad happening. It was so well done.

There was another, smaller, scene that I think I enjoyed just as much as the other. It was Lady Mormont meeting her cousin, Ser Jorah. It was only a transitional moment, but it was just as enjoyable as the others. The episode ends with the horn sounding of the White Walkers approach. We see them arrive, sans Night King. Thus setting up the massive battle in episode 3. It’s going to be longer than the siege of Helms Deep from Lord of the Rings: The Two Towers. This is going to be a landmark moment in TV history, I can feel it already. And given all the characters meeting up and finishing off their arcs, you can expect that the cast number will be trimmed significantly. But more on that in our spoiler talk article later this week!

Overall, an outstanding episode of television. The themes of development and change, change that has been building for years, finally bearing fruit was so satisfying. Our characters have tied off all their loose ends and it’s time to shift from individual character story arcs to the main battle next week. Strap yourself in folks, it’s going to be something very special indeed!