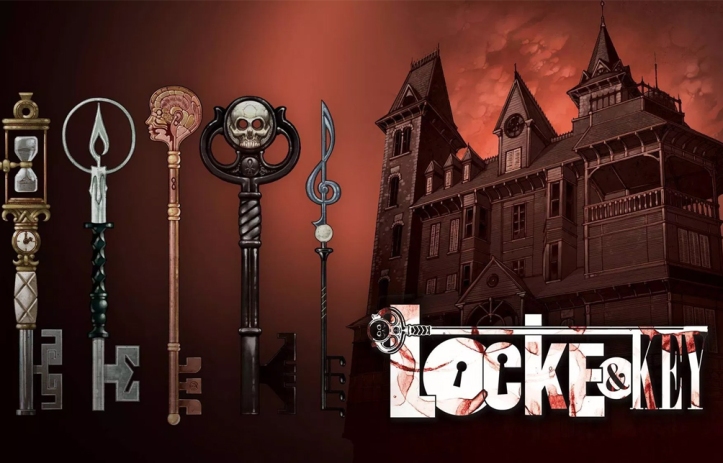 A brutal and tragic event drives the Locke family from their home in California to the relative safety of their ancestral estate in Lovecraft, Massachusetts, an old house with powerful keys and fantastic doors that transform all who dare to walk through them. As siblings Tyler, Kinsey, and Bode Locke discover the secrets of the old house, they also find that it’s home to a hate-filled and relentless creature that will not rest until it forces open the most terrible door of them all….

Featuring performances by Haley Joel Osment (Entourage, The Sixth Sense), Tatiana Maslany (Orphan Black), Kate Mulgrew (Orange Is the New Black, Star Trek: Voyager), Joe Hill, Gabriel Rodriguez, and Stephen King (The Stand, 11-22-63), as well as a cast of more than 50 voice actors, this audio production preserves the heart-stopping impact of the graphic novel’s astounding artwork through the use of richly imagined sound design and a powerful original score. 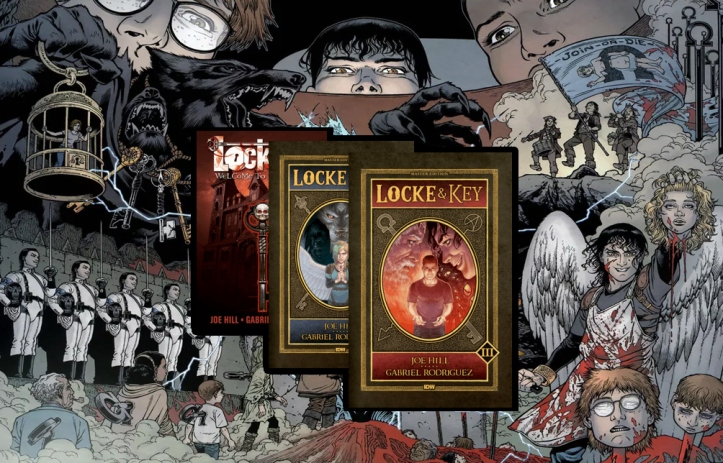 To put it simply, this full-cast adaption of Locke & Key is sensational!

Having never read the graphic novels, on which this audiobook is based, I had little knowledge of what I was getting myself in to. This was my first time experiencing a Joe Hill property, and my appetite has definitely increased for more! His ability to merge young-adult themes with the more mature subject matter is really impressive. He nails the pacing of the story perfectly, allowing for plenty of character and story development, while at the same time continuing to push the story and sub-plots along. You are never sat still. There is always something that has your attention gripped!

In terms of the story, it is incredibly imaginative and captivating. While there were elements that are taken from his father’s work, IT, The Dark Tower and The Stand, these are simply welcome familiar additions, to what is, overall, a very original story. I was blown away by how creative the concept of the story way. A house full of keys that open doors to other plains and possibilities. When you mix that with incredibly fleshed-out characters and a killer audio production, this audiobook was well and truly on to a winner!

Speaking of production, I have to say I was very impressed. A full-cast production is not always the easiest of things to pull off, but they really have done an outstanding job. Not only is the edit really crisp and fluid, but the sound effects and score are used to perfect execution! I cannot praise the music in this audiobook highly enough. It was beautiful, upsetting and added so much weight to the vital story and character moments. 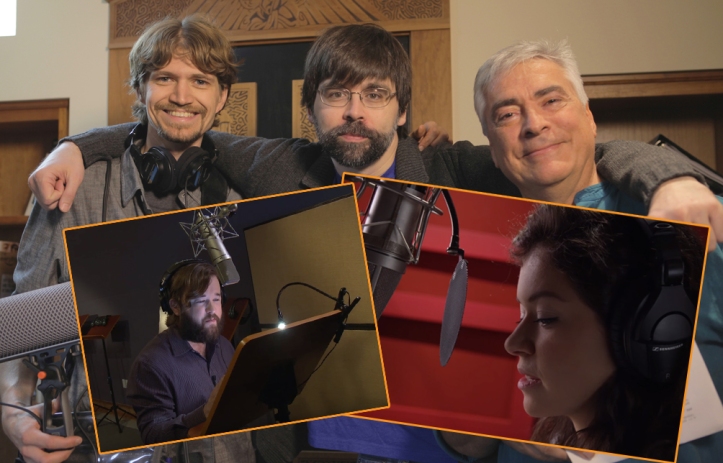 As for the cast, I don’t think there was a bad performance in the entire production! They decided to use mainly unknowns, over 50 of them! Even minor characters, who maybe only had a few minutes of dialogue in total, really delivered an authentic performance. The story has three main protagonists, Tyler (Brennan Lee Mulligan), Kinsey (Jaime Alyse Andrews) and Bode (Betsy Kenney) Locke. Because Bode is a young kid, the performance was a little too whiny at times, and it did just tip over to a little annoying. But only just! The performance as a whole was fantastic, so I will take nothing away from that. The ‘names’ used to sell the book are Haley Joel Osment (Sam Lesser), Tatiana Maslany (The Lady in the Well) and Kate Mulgrew (Candace Whedon). Now, each of these performances is fantastic, but they are also only a small portion of the overall performance. I was surprised that they were not a more prominent feature, but their time was used to great effect overall.

As for the main antagonist. ‘Dodge’ is an incredible, unrelenting character and I don’t think I’ve ever ‘disliked’ a character more than him! He’s definitely up there. But despite how evil and manipulative he was, the character also was incredibly appealing! Just like Joffrey in Game of Thrones, credit has to go to Ian Alan Carlsen for making this character so unlikable (in a good way). You want to see him get his comeuppance, but just when you think the good guys will come out on top, he’s got another “get out of jail free card (or key)” hidden up his sleeve. It’s frustrating in a positive way, as it just leaves you hooked and wanting to see the outcome of the final showdown. A fantastic character!

Locke & Key is an exceptional full-cast performance piece, with high production values and a gripping, exciting story. Adapting a graphic novel isn’t easy, and could not have been done without the exposition from the narrator. While taking you out of the story momentarily, it does not diminish the enjoyment of the overall journey. This was easily one of of my most enjoyable audiobook experiences to date!