The first trailer for Spiderman: Homecoming has landed, and it is safe to say it has made quite the impact!

Before we go through our favourite moments from the trailer, we are going to make a prediction. Having seen this trailer, and based on that alone, Spiderman: Homecoming will be the greatest Spider-Man movie to date.

They have really nailed the awkwardness of the character, the Peter Parker moments in the trailer are perfect. This is a kid going through that difficult period at school with the added pressure of being a crime-fighting superhero. Maguire and Garfield always felt too old to play ‘the kid’ side and they both were heading to in to the big wide world, whereas Tom Holland is stuck at school. This already give the character a refreshing feel, and given that we have had two version in quick succession over the past ten years, that will be a key factor in to the film’s success.

How do you remind everyone that Spider-Man is in the MCU? Have bank robbers wear Avengers masks of course! This was just a perfect, albeit silly, way to hammer home the fact that Spider-Man’s world is directly connected to the MCU.
We also got a glimpse of, what looked like, Chitauri technology with the laser the robbers were using to open the safe. While it may not turn out to be Chitauri tech, it does look very familiar.
While Spider-Man is very much its own entity, embracing the wider MCU in this way not only helps benefit the film, but also the fans. 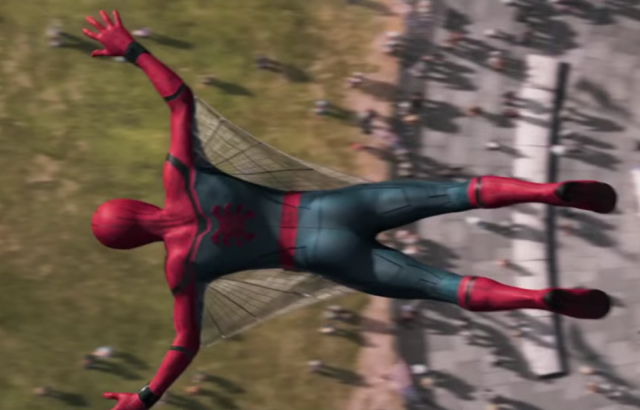 It got us all talking in the teaser the day before, but the spider-wings really shows that we are getting a different type of Spider-Man in comparison to all that have come before him.
With Stark as his tech benefactor, you can expect more high-end tech when it comes to his equipment and the suit itself. While the wings aren’t new to comic book fans, they  have definitely stood out with the non-comic audience. They have so many different things they could use from the comics, but hopefully they also create new tech that no one has ever seen before. They have so much potential to work with, it would be a shame if they didn’t make the most of it.

While the trailer did feature a lot of Robert Downey Jr, don’t expect to him to be in the film that much. It’s unlikely to go past the twenty minute mark in terms of screen time. He is there to support and guide Peter, this is a Spider-Man movie after all, so they will more than likely focus on setting up their own characters.
Throwing us a lot of Tony Stark, and Iron Man, in the first trailer makes a lot of sense in terms of reaching a broader audience. If you didn’t believe that Spider-Man was truly part of the MCU after Civil War, they are simply reminding you of that fact with Stark’s presence in the film. It works for the MCU, for Spider-Man and for the fans. It’s a no brainer.
Civil War showed the two actors had great chemistry, and the awkwardness and quips between the two in the trailer is hopefully the tip of the iceberg in terms of the comedy between the two.

While movie comic book villains are usually highly forgettable and disposable, we can only hope that this changes with Michael Keaton’s Vulture. Not only is Vulture a classic Spider-Man villain, he is one that we haven’t seen on the big screen yet. With the two previous attempts using pretty much the same villains, it is refreshing to see them steering away from Green Goblin and the Osborn’s.
There is also an intensity to Keaton that made him such a compelling Batman, and from the glimpses we saw of him in this trailer, we can only hope that the script allows him to be the best villain possible.

Anything Cap’ Can Do, I Can Do Better

We have seen Tobey Maguire’s Spider-Man stop a train in a similar fashion, but this really takes it to another level. This striking image also hits home, that despite the fact Spider-Man is essentially a kid, he holds within himself such great power.
We’ve seen that he can go toe-to-toe with the other big players in the MCU already, but this just goes to highlight his powers in his own mini-universe.
He may be a kid, but he is one of the strongest superheroes on the planet, and this movie looks like it will be the platform to push Spider-Man to the forefront, making him a big player in the future of the MCU.
While this is just a theory, it could be a way of having Spidey send a message to us, the audience. Remember how strong Captain America was holding on to Bucky’s helicopter in Civil War? Well check me out! We also see him keeping up with Iron Man at the end, so another potential nod to get over how impressive his powers really are.

So there you have it, our top picks from the first trailer for Spiderman: Homecoming.

Are you excited for the latest version of Spider-Man now? Or do you still need some convincing?

Let us know your favourite moments from the trailer, or any other thoughts you want to share about Spiderman: Homecoming in the comments below.