So, the penultimate episode of Season 8 of The Walking Dead is here.

This was always going to be a difficult episode to pull off. It needed to set everything up for the finale while still being an engaging and interesting episode in its own right. For the most part, they succeed, however they did have to sacrifice some moments that could have used a little extra time to set up the final showdown.

‘Worth’ focused on the Savior’s and Negan’s return, with plenty of cloak and dagger. There were twists and turns, albeit predictable ones, and the way the different narratives played out actually worked. So that was a big positive. The main theme here was that there were a few characters who had some key decisions to make which would ultimately seal their fate. 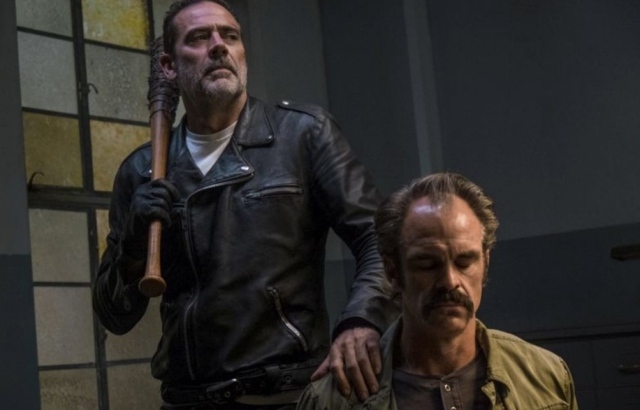 Let’s start with Simon. Negan gives him the ‘pass’, despite framing the shot for him to make you think he is about to get ‘Lucilled’. You knew it was a fake out, just like you knew that Negan had not forgiven him and that he would end up dying this episode. The way in which they did it was a little ‘Trial by combat’ from Game of Thrones.  All the Savior’s gathered for Simon and Negan to fight for control of The Saviors. There was only ever going to be one winner, and win Negan did, killing Simon by choking the life out of him. It was an interesting way for the character to go, and probably not the way many had expected. His character had served his purpose and with a new showrunner taking over next season, it’s about time the cast was thinned out.

Eugene is a character who has got lost in the shuffle. A comedy goofball character who has slowly turned into a chore over the past few seasons. His role in this episode was to be taken by Rosita and Daryl only for him to escape and make his way back to the Saviors.  There will be some hoping that he’s going to make that switch again, but like I said when he first arrived there, he’s a full-on Savior now. The character has no time to develop anymore, it is probably best that he is put out of his misery come to the season finale. Another full season of this level of poor writing and lack of development will destroy what is left of the legacy of Eugene. It would be nice if he could be remembered for being weird and humorously awkward rather than a one-dimensional henchman.

The final character whose fate is pretty much decided is Dwight. Some may have thought that Negan was still oblivious to Dwight being the mole after Simon’s death. But if he can see through Simon, you sure as hell know he can see through Dwight. Dwight gives the Savior battle plans to Gregory, allowing him to return with the intel to Hilltop. He does this. It’s just a shame that the intel is fake. Negan has given them false information to set them up, positioning them right into his trap. This will go against Dwight as Daryl and Co will continue to believe that he has betrayed them. I don’t think it matters too much, as I’m pretty sure that Dwight will die in the finale, either directly by Negan or more likely, a self-sacrifice. Just as you think Dwight has gotten away with everything, Laura is found waiting for him in his room. So she was the mystery woman Negan picked up! With Dwight exposed and Negan ready to spring his trap, the ‘heroes’ are once again in peril, which naturally makes for a more interesting finale.

The episode wasn’t all Saviors though. Aaron had some time in the woods near Oceanside and he actually had some really nice dialogue. Ross Marquand was on top form here with his acting. Oceanside, as a community, do not interest me, so I’m a little frustrated that the great potential of Aaron is being wasted here.We also had Michonne who found Carl’s letter to Negan. She made her way to the compound and read it out for him over the radio. He was not interested, as expected, and proclaimed that death was coming. All-out-war is back on, again.

Overall a solid episode of The Walking Dead that managed to set up enough story for the finale, without ever really being too stand-out in its own right. The pace was good once again, which helped the numerous dialogue-heavy scenes.

What did you think of ‘Worth’? What are your predictions for the season finale? Leave your thoughts in the comments below.