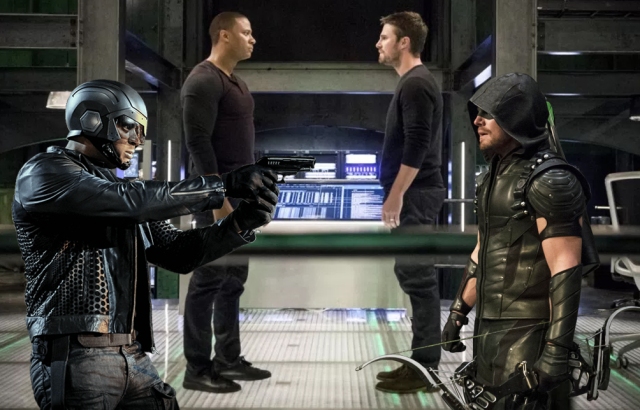 It’s back to business this week as it’s all hands on deck in trying to put an end to Diaz’ reign over Star City. Oliver is shocked to find how bad the situation actually is when Anatoly is set free by the DA after being arrested by Dinah for drug dealing. Diaz has the whole city working for him and focus turns to stopping the distribution of the vertigo drug. Mayor Queen eventually confronts Captain Hill and DA Armand about their involvement with Diaz. Even though they both come clean and reveal that they are being blackmailed by Diaz, Oliver fires them both. It was nice seeing Dinah and Oliver working together. Begrudgingly, but still … maybe there’s a reconciliation on the horizon after all?

Oliver finally comes clean to Diggle and tells him that he’s not giving up the hood. Diggle acts alright with it, but he’s clearly covering up his disappointment. He does offer Diggle a pretty sincere apology, explaining that the hood completes him as it’s the best part of him. Diggle initially accepts the apology but when talking to Lyla later, he can’t shake the feeling that he’s unhappy. Lyla gives Diggle information on a vertigo dealer and he and Oliver pay the dealer a visit. Diggle goes crazy when interrogating him and starts hurling abuse at Oliver, which results in the dealer being shot to protect Diaz.

When they arrive back at base, tempers are high and tension reaches boiling point. I can admit overreacting easily, but this scene is in one way absolutely incredible viewing, but at the same time soul-crushing. Diggle admits to Oliver that he’s frustrated with his recent actions which have resulted in the team splitting and Diaz gaining control over the city right under his nose. He accuses Oliver of being a bad leader, becoming self-obsessed and not fighting for the city anymore. A nasty argument explodes as they both drag up the past and take digs at each other. Diggle reminds Oliver of the body count due to his actions, and uses William against him, blaming him for William not having a mother anymore. Oliver retaliates by telling Diggle that at least he can’t count his own brother in his trail of bodies. OUCH! Diggle punches Oliver square in the mouth and they both roll around fighting until Felicity runs in and gives them a good telling off like two naughty schoolboys.

They briefly put their differences aside to take down Diaz’ warehouse but when they get home Diggle reveals that he can’t work with Oliver any longer and leaves the team.

Stephen Amell and David Ramsey gave us some fantastic moments in this episode, but WHAT THE HELL IS GOING TO HAPPEN NOW???!!!! Team Arrow took a huge hit when Dinah, Rene and Curtis left but how can Oliver carry on without Diggle? For the past 6 years, he’s had Diggle by his side. Brothers. Partners. It’s always like one knows what the other is thinking. With Diggle seemingly taking up Lyla’s offer of a job at ARGUS it doesn’t look like he’ll be changing his mind. I just can’t cope without OTA.

Yeah there was other stuff with Curtis, Dinah and Laurel but I’m too depressed to talk about that now …. let’s just call this a spoiler-free review instead (ish) while I go cry in the corner 🙁

What did you think of the episode? Let us know in the comments.