The main story of the episode focuses on Daryl and Michonne gaining intel on this new threat. They’ve escaped the graveyard and are on the hunt. The covered bridge scene was perfection. Not only in practical and visual execution, but it was a clever and sensible way to push the story forward. Finally, we are seeing some logic return to certain characters. Daryl being the main change. His way of testing for faux-walkers was genius. Shooting one Whisperer in the leg soon lead to his death. Luckily for them, they travel in packs so manage to catch a young woman and are able to take her back for interrogation.

Back in the cells, we find out that the young woman is called Lydia. But despite her appearance of being extremely frightened, her story changes and it’s clear to Daryl and the audience that she is lying. Daryl leaves her in the cells, but she is not alone, as Henry is in a cell of his own. The two begin to chat and get pally, unbeknownst to Lydia that Daryl is listening outside. Again, very smart! Now, Henry could be there as part of Daryl’s plan willingly, or as an unwilling participant. I’m not sure yet, but my gut is going to go with that he’s in on it. With Carl dead (Still the show’s stupidest decision), I can see Henry taking his comic book arc, likewise with Rick ‘gone’ I can see Daryl (even though comic wise it should be Negan) being the one to the lead on Lydia’s mother, ‘Alpha’ (more on that further down).

The secondary plot followed Negan, and with Rick now gone, there is no better character to fill his place on the show. Jeffery Dean Morgan is such a charismatic actor and the show would be worse off if he was still stuck in his cell. We need Negan 2.0 out and about, getting involved with the main story arc. His relationship with Judith is another big positive for the show. They have such great chemistry together. “I’m a kid asshole” was the perfect way to end the conversation during Negan’s escape. It’s clear that he can survive on his own, escaping dogs and walkers on his travels. But this story really peaked when he returned to Sanctuary.

These scenes were a symbolic way to ‘kill off’ the Negan that we knew. He converses with a turned Savior, talking about loyalty, before finally killing him and ‘old Negan’ with it. It’s clear that he’s returning to the group, and while it won’t be straight forward, he WILL be a big weapon in their arsenal in the coming episodes. I know it’s not going to be easy, but I really hope they don’t drag out any group conflict regarding Negan’s integration. Get it cleared up in a few episodes, have Negan make a big save and push his redemption arc even more. The show needs to learn from its past mistakes. Don’t drop the ball with this one! 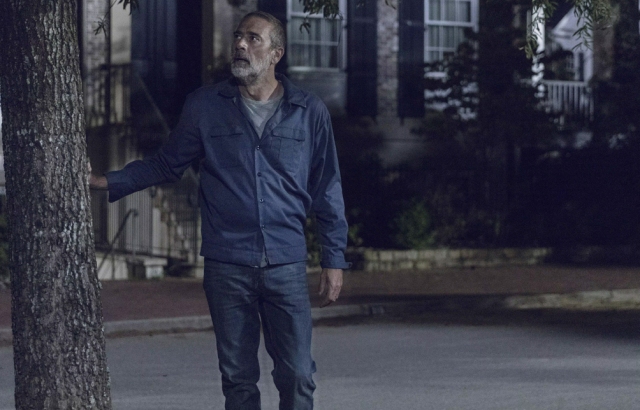 The episode’s ending was very, very good. Here you had Luke and Alden on the trail of the missing group. I like the dynamic between these two, and I’m a big fan of Alden as a character. So I’m hoping that he’s pushed up the pecking order a little. We see a walker heading towards them in the distance, nothing to worry about right? The two begin to approach it casually until the walker stops dead in its tracks. This gave me chills. As the confusion began to set in, more standing ‘walkers’ appear out of nowhere. They are surrounded. The walker they had been watching begins to walk towards them with purposeful strides, drawing a shotgun, aiming at the two startled men and delivers the chilling line “Trail ends here”. They had been played and fell headfirst into a Whisperers trap. There’s no mistaking the fact that this was Alpha, leader of the Whisperers played by Samantha Morton. I can see this leading to an ‘exchange’ of kinds for her daughter, Lydia, further down the line. I loved this scene. It was textbook horror, and that seems to be the way the show is handling them, and I am totally on board with this.

Away from the Whisperers we have a love triangle, or should that be love square? Rosita, Eugene, Gabriel and Siddiq. Rosita is (probably) carrying Siddiq’s child while smooching up with Gabriel and now Eugene has stepped up to finally confess his feelings for her. He ultimately overhears what’s happening and it’s clear that it’s never going to happen. I can do without this subplot, to be honest.

The Walking Dead has, rightly, been criticised in the past for sometimes being “stupid” in terms of character and story execution. It’s hard to argue with this. Over the years we have seen some strange character and story choices that just frustrate us as viewers. But so far, under new showrunner Angela Kang, these have been greatly reduced in Season 9. This episode was a prime example of that. Daryl listening outside of the cell. Shooting the walkers in the legs to flush out any pretenders. Smart, logical steps that make the show better overall. Yes, we have to suspend disbelief that Judith can fire Rick’s hand cannon with perfect accuracy without going flying. But even here, they had her in a brace stance, so it at least shows that even with the little things, they are adjusting the way the show is put together.

Some will criticise this episode because it lacked action, but the show has never been about that. So to constantly attack the show because of this is just stupid. We’ve just had a massive show change. Any walker could now be a Whisperer. This gives the walkers a new, much needed, boost in terms of them being a real threat again. You don’t know what to expect from them. Is it actually a walker? Having the audience question this and having them looking at every walker for any little hint they might be a Whisperer just adds a sense of excitement to the show. It’s increased audience interaction with the product, and that can only be a good thing, hopefully bringing fans back who may have walked away.

The Walking Dead returns with a solid episode that sets the groundwork for the remaining episodes of Season 9. The newly added threat that “any walker could be a Whisperer” adds an extra layer to show as an audience. The show ended with a real taste of things to come and I cannot wait for us to get the full Alpha and Beta reveal.