Before I begin this review I actually want to comment on my experience going to watch Captain Marvel. As we were stood in line for the film, Zoe and I couldn’t help notice the number of young women and girls in the audience. There was this amazing, positive vibe in the air, and you could not help but feel that you were witnessing something special. As with Black Panther, there was a bigger picture here. No matter what, this film was going to have a big impact on a lot of people.

There are still people (idiots) who don’t want to see female or POC characters leading a big superhero movie, or any movie in fact. They will do all they can, mainly online, to stop it, but these people really need to get understand that they are looking at the future of the MCU. In this case, the future leader of the Avengers. And no amount of website bombing is going to stop that. – This will be all the ‘politics’ stuff done with now, as I want to focus on the movie itself.

Marvel have a set way in which they like to tell their origin story movies. These are very formulaic, but always still enjoyable, it’s ‘a Marvel movie’ after all. You know what to expect, and it’s rare that these expectations are blown away by something completely different. So how does Captain Marvel fit in with the rest of the MCU origin films? It certainly tries to bring something different to the table, but for the most part, it does feel very safe. Which is not a bad thing by any stretch, I just felt, with a film of this magnitude and importance, that it was going to be more unique, like Thor: Ragnarok. I would also tie this issue in with the directors, it never felt like they brought enough creativity and imagination to the film. Which, again, was disappointing. The film does have its outstanding moments however, but to get to these moments you will have to struggle through a painful first act. Marvel have nailed their space stuff over the years, but here it all feels a little clumsy and more of an afterthought.

While the space stuff was generally disappointing, the film really gets going when we reach Earth. There are plenty of nice character interactions and relationships, all blended in nicely with plenty of 90s references. Not all of these worked, however, but when they did, they were great. A lot of the IT references, in particular, got me, but that ties in with my day job. There is one PC related scene in particular that had me genuinely laughing out loud, something I rarely do in public. So, good job! Sticking with the 90s vibe, the film’s soundtrack is packed full of female-led empowering songs. While some of these were very ‘on the nose’ at times, you can understand their use in their respective scenes. I would also add that the ‘on the nose’ issue pops up in some of the story and dialogue, again I can understand why they are having to spell it out so obviously for some people. So it’s not too big of an issue for me. 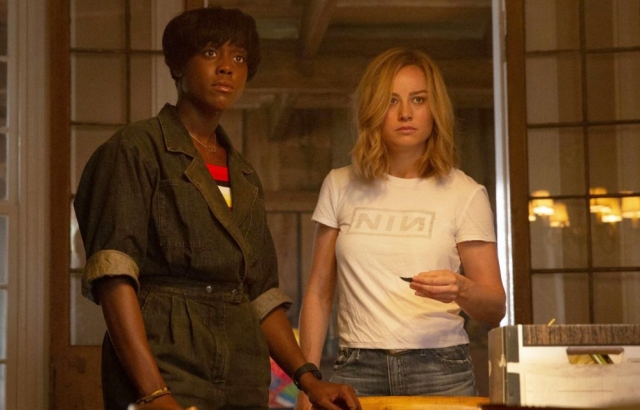 So what are the film’s strongest points? While the overall story isn’t the best, the performances in the film were, mostly, very good. Brie Larson was sublime as Carol Danvers. Her spirit and unwillingness to be held back were perfectly played out during the film. There was no telling her that she couldn’t do anything. She had nothing to prove, despite constantly being told otherwise. This was an inspired performance, and I hope that they continue to build on this going forward. I’ll be honest, I’m not a big fan of Captain Marvel, as I have an issue with overpowered superheroes, but Larson has converted me to the cinematic version of the character at least. Samuel L. Jackson gave a different kind of Nick Fury performance to what we are used to, which was rather refreshing. You see glimmers of the character we know and love, but there is also a warmer, more humorous side to his character that was really enjoyable. Danvers and Fury have strong chemistry, once the film finds it’s feet, so hopefully, this won’t be the last time these two share the screen together.

For the first time in all my reviews, my movie MVP is a draw! Take a bow Lashana Lynch (Maria Rambeau) and Ben Mendelsohn (Talos). Lashana blew me away with her multilayered performance, displaying strength, humour and vulnerability in equal measure. She was a fascinating character. As for Ben Mendelsohn, this was probably the role I’ve enjoyed him in the most. His character goes on an incredible journey, and this is definitely a career-best performance for him. The same cannot be said for Jude Law, however. Now I like Jude Law, he is very talented. But in Captain Marvel, it is a very phoned-in performance. I was very disappointed by this, as the potential for a great character was there. The rest of the Starforce team were also very forgettable, with only Djimon Hounsou (Korath) having one shining moment. Lee Pace (Ronan the Accuser) was solid enough. I love Lee Pace so hope that he can still pop up in future MCU movies, despite events at the end of Guardians of the Galaxy.

As with all things, it’s a balance of good and bad, and despite the great character performances, the film has some issues.

For starters, a lot of the CGI  used in Captain Marvel isn’t great. This is, however, a wider issue with Marvel and has been a problem with a lot of the recent MCU movies. The big action scene at the end is once again like watching a video game cutscene. For all the detractors of Justice League and the ‘Supertach’, the digital de-ageing on Clark Gregg (Coulson) was very jarring. It wasn’t good at all. How they managed to get Fury right but not Coulson, who has considerably less screen time, is very confusing. I also felt the film needed a lot more colour, it was very dull at times and was not that visually striking.

While the above can be viewed as nitpicking, my two main issues with Captain Marvel revolve around the trailer and the execution of their storytelling. First of all, they gave away too many key moments in the trailer. Without going into spoilers, it’s hard for me to explain, but an editing technique I assumed was used for the trailer makes an appearance, as is, in the film. In my opinion, this was a monumental mistake, as it completely downplayed the moment in regards to the context of the film. I wish they had kept this hidden, it would have carried so much more weight. As for the storytelling, there were too many convenient explanations or moments that just come off as lazy writing. “Why can X do Y?”, “because they just can”. There wasn’t enough explanation as to why things or events occurred, you just had to expect that they did, even if logically it didn’t make any sense. I just felt this let the rest of the film down. 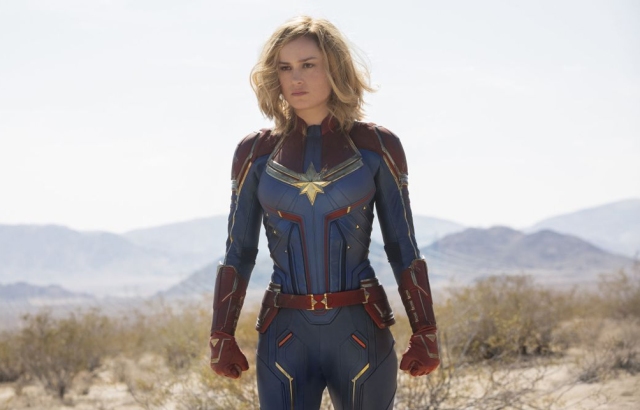 If I was to summarise this movie, I would say that it is a good Marvel movie with some outstanding moments. It has the same amount of positives as it does negatives, but again, this isn’t unique to this movie but can be seen in a lot of the films within the MCU. If I was to rank it against all the other MCU films, It would be upper-middle somewhere. While Captain Marvel may have missed out on some of its potential in this movie, I view this as laying some very solid foundations for the future. I think with a braver, more creative team behind the next Captain Marvel movie, there will be much more scope for greater things. I also believe that the Russos are going to tweak and refine the character more in Avengers: Endgame, just like they did with Captain America.

Captain Marvel combines a powerful message with great character performances. While it does not always break free from Marvel’s formulaic template, it does have its moments to shine and make it stand apart from the rest. The cast really delivers, but the film is let down by poor CGI and convenience storytelling. The foundations have been laid for greater films to come, and with an inspiring leading character like Brie Larson’s Captain Marvel, the future of the MCU is in good, and powerful, hands.

One reply to “Captain Marvel Review”