This film really had an impossible task. Being the first release from Marvel since Endgame, we needed to see the fallout from all that epicness as well as having an entertaining new story to take the universe into its next phase. Far From Home totally pulls this off. It pays tribute to our fallen heroes really well. The feeling of loss the world is experiencing as well as the rebuilding everyone has had to do since the people who were taken reappeared (now known as ‘the blip’) is portrayed superbly and there is a strong sense that it’s simply time to move on and look to the future.

As a huge Spider-Man fan, I truly feel that Tom Holland gives us the perfect Spidey. This is the fifth time we’ve seen him in this role and each time there has been such noticeable character development. Let’s not forget Peter Parker is a 16-year-old kid. In Far From Home he battles between his desire to be a kid and have those experiences that go with being 16, and saving the world once again. Heads up – he doesn’t get much choice! You can see how much he’s struggling without Tony and in a world where civilians are desperately looking for protection from Iron Man’s replacement, he’s forced to take the lead, make tough decisions and be the hero that Tony believed him to be. Tom plays the role with humour and soul in equal measure – you just couldn’t ask for anything more. There’s so much heart to this film and Iron Man’s presence is felt throughout. There are many touching moments that make your heartbreak even further. Are we ever going to recover from Endgame? 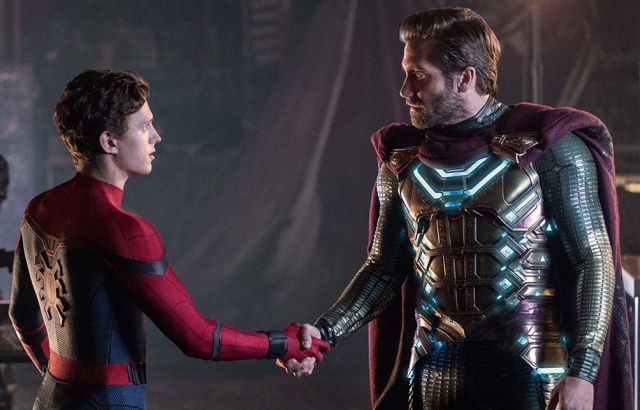 What can I say about Jake Gyllenhaal? I don’t think I’ve ever seen a bad performance from him and yet again, he doesn’t fail to impress as Mysterio. I’m not going to say much about his character but for me, he was a great addition to the MCU. Mysterio is a hybrid version of Iron Man and Thor (with a splash of Doctor Strange) who seems to be a gift sent from the multiverse at a time when our planet really needed him.

The returning cast were just as fabulous. I thoroughly enjoy Marisa Tomei’s take on Aunt May, it keeps the new Spider-Man films feeling fresh. I loved the build up of her relationship with Happy Hogan. In fact I just loved Happy in this and I’m hoping that Jon Favreau has secured his place in the Marvel universe post Tony Stark. Jacob Batalon, Angourie Rice and Tony Revolori as Ned, Betty and Flash are much needed and valuable side characters for Peter’s story and growth. Ned especially continues to provide so many comedic moments. He’s a great character. Zendaya gives another great performance as MJ. She’s a new age MJ who people will relate to so much more than Kirsten Dunst incarnation. She shares a fabulous on screen presence with Tom Holland which means viewers genuinely become invested in their relationship. Samuel L. Jackson and Colbie Smulders represent S.H.I.E.L.D as Nick Fury and Maria Hill. I would say this is my favourite appearance from Fury. Every time he was on screen was a joyful experience.

Visually this film is beautiful. There’s a scene which I would actually say is one of the best scenes – if not THE BEST – I’ve ever seen in a film. It was courageously jaw-dropping and you’ll find yourself holding your breath watching it play out. Totally made the IMAX ticket price worthwhile. I also found that there were so many nods to the Spider-Man PS4 game which was so well received by gamers everywhere. Having Spider-Man travelling the world meant we had some stunning sets from Venice, Prague and London. It was fun to see him out of New York and I especially enjoyed watching him swinging around my hometown, London. So much so that I will be looking out for him next time I’m strolling down the Southbank.

Lastly let’s talk about the Spidey suits. We had a variety and probably the most amount of suits we’ve seen him use. The stealth suit was beautiful but I really enjoyed watching Peter use his scientific smarts to build on what Tony started and create his own suit towards the end of the film. It was stunning and even comes with a spider shaped parachute. Amazing!

Essentially, Far From Home is a coming of age film set in a world of superheroes. It’s the perfect pick-me-up after Endgame and on the whole, is a completely satisfying experience. If we’re needing a new Robert Downey Jr to be the next face of The Avengers we should look no further than Tom Holland. He deserves huge applause. P.S make sure you don’t miss the mid-credits and end-credits scenes!