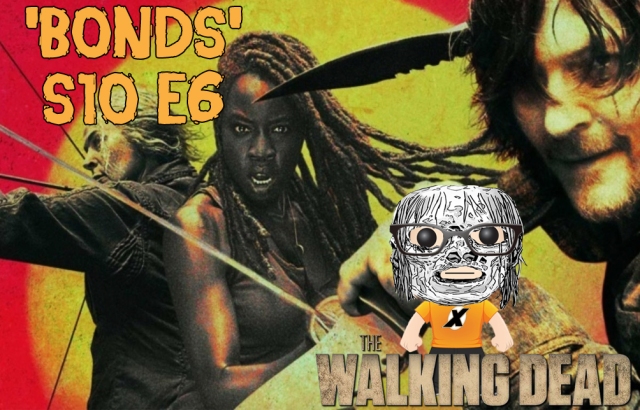 This episode is aptly titled ‘Bonds’, and features a number of characters interacting with each other in groups of two. We have Daryl and Carol, Negan and Beta, Eugene and Rosita, Eugene and ‘the woman’ and Siddiq and Dante. I was worried that this might have lead to a filler episode but I ended up being pleasantly surprised. The focus on these character interactions was not only enjoyable, but they managed to push the story along at the same time. It didn’t tread water, something the show has been guilty of previously.

Carol is on her way to ‘look for Negan’. Daryl asks to tag along, so of course, she won’t say no. But just like Daryl picked up on, something wasn’t right. You could tell Carol was lying throughout the entire episode. She’s got one drive, to kill Alpha. Her actions here, once again add to my belief that it was she who let Negan out of his cell. She wants to put a ‘fox amongst the chickens’, cause enough distraction and chaos so she can swoop in for the kill. We’ve had a few nice Carol and Daryl moments so far this season, and this felt like a very old-school storytelling method in The Walking Dead. Two survivors, in the woods, tracking and avoiding walkers. It was almost nostalgic, even more so given it’s two of the originals! This story really came into its own when night fell. Surrounded by a herd of walkers, some of which were ‘whispering’, Daryl has to navigate his way out and not get bitten. This was a great horror moment in the episode and once again the walkers feel like a genuine threat again. Daryl manages to cover himself in walker blood and make his way to safety. He meets Carol, who has captured a whisperer, Daryl does not like her plan. Passing through their territory is one thing, but taking a prisoner? That is something very different altogether! You just know there is going to be repercussions from this, especially if Aaron takes in Gamma, as they’ve hinted at. Imagine if Gamma spots the prisoner at the camp, she can cause a whole lot of trouble once she gets the word back to Alpha. Has Carol just given the Whisperers a pretence for war? 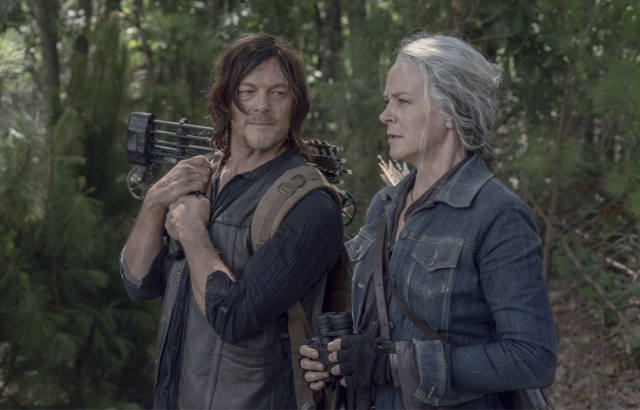 Last week we saw Beta capture Negan, and I’m glad they didn’t spend too long in getting back to this storyline! For me, Negan joining the Whisperers is the most exciting story thread right now. That’s not to say the others are bad, far from it, I’m just eager to see Negan interacting with this group after being hidden away for so long! It started pretty much how you’d expect, with Negan, full of swagger and quips, not phased by the Whisperers and oozing confidence throughout the episode. I’m glad they held off, initially, with Alpha meeting Negan face-to-face. Using Beta as the go-to guy was the smart thing to do so that we can build up the story more. When Negan finally gets to meet Alpha, we’ve earned that moment much more. Negan is put to work by Beta, and Negan goes along with it. In what is probably the most surreal musical montage you will ever see, Negan proves to the Whisperers that he can cut it in the camp. The funniest moment came when Negan, struggling to carry a body, was followed up by Beta carrying two with ease. To have this type of comedic moment with such a serious group, like the Whisperers, could have been jarring. But it actually worked, such is the power of the character of Negan!

Beta is starting to feel the pressure of Negan’s arrival, so decides to leave him for dead by making the walkers attack him. The next morning, Negan swaggers back into camp and bends the knee, to the horror of Beta. He’s finally face-to-face with Alpha and she simply shushes him. I’m fine with them leaving us waiting for another week! While Negan was brilliant throughout all these scenes, the one thing I take away from this is how much it knocks Beta out of place. We’ve already seen Gamma rise through the ranks, and you know it won’t be long before Negan follows her. Alpha calls Beta out on this suggesting that is Negan joining bad “for Alpha or for Beta”. Beta is now fighting a war on multiple fronts to keep his position as Alpha’s number two. You just know Negan is going to continue to push his buttons and cause some serious internal conflicts. I cannot wait to see how this unfolds, it has the potential to be something truly special.

Away from the two main storylines, we have Eugene and Siddiq. The sickness, that Rosita has, is starting to spread throughout Alexandria. What started out as a few patients, including the sassy granny Cheryl, has now lead to a high volume of people becoming sick. It’s essentially a stomach bug, and it doesn’t take a rocket scientist to realise that the cause is probably down to the dead walkers that Gamma is using to contaminate the water supply. This type of biological warfare is already paying off for the Whisperers. While these settlements may have the numbers, if the people they have are too weak or sick to put up a fight it makes their numerical advantage redundant. Siddiq’s PTSD is also getting considerably worse. He’s spacing out and waking up at other locations. Even more terrifying given that he’s carrying a baby around with him! This is one to watch, but I don’t think it’s going to have a happy ending.

At Hilltop, Eugene is keeping himself busy with engineering projects before taking a break to have a nice interaction with Rosita over the radio. This is the first time I’ve enjoyed these two in the same scene for a while, and that is mainly down to them not leaning heavily on the ‘friend zone’ angle. When using the radio again, Eugene comes across a woman’s voice, the same woman who we heard in the Season 9 finale. I was starting to wonder when they were going to pick that storyline back up again! Despite Eugene opening up a little to her, to try and form a bond, she doesn’t give anything away. There will be many theories on who this could be, I’m still holding out for the Commonwealth, but at least it looks like they are starting to develop something with this. The voice is credited to Margot Bingham, who was in Boardwalk Empire and more recently New Amsterdam. This feels like more than just being cast for voice, so could indicate that Eugene’s love interest, and fellow radio operator from the comics, Stephanie is going to be coming to the TV show. This only further stokes the fire of the Commonwealth rumours.

Overall, another solid episode! The first act with Daryl and Carol took some time to get going, but when it did, the payoff was worth it. Sometimes you need these slow-burner episodes to set up the next phase of the story. Previous showrunners have let these types of stories drag on over multiple episodes, but at least here it’s all done in one! Like I said earlier, I enjoyed the horror aspect of this story. This was the first time, probably since Jesus’ death, that the Whisperers have been truly scary. Hearing their voices in and amongst the walker groans was chilling. And while they’ve had tense moments since their introduction, nothing has come close to replicating the horror felt in the graveyard. As much as I am enjoying the Whisperers, I don’t want their story to go beyond this season. Maybe that is why the voice on the radio has only just come back into play? Could that be starting to set up Season 11?

It’ll come as no surprise that, for me, the Negan and Beta element of the episode was the strongest. It was a great focal point to have, especially when you consider it managed to add some comedy to proceedings. We know that Negan’s goal here is to take the Whisperers down from the inside. I like that the show isn’t trying too hard to try and hide this fact from us. They know the audience understands, and to try and present it in any other way would be disingenuous. It’s just a shame we have to wait another week to find out what happens next!

What did you think of this week’s episode? Let us know in the comments!