If you know anything about me or have read any of my previous gaming articles or watched any of our YouTube videos, you know how much I LOVE the point and click genre. It’s my jam, my go-to, it’s the game type that turned me into a gamer. I was the young kid having his mind blown my Monkey Island and all the other LucasArts games. As I moved into my teens I started attending LAN parties and events where I would come home with CDs containing an indie games designer’s latest game. Some of these games have never seen the light of day! The video game industry is now about the big studios and the cutting edge graphics. Many would say that the point and click genre, now that Telltale are no more, has no place in the modern gaming scene. And I couldn’t disagree more! While it might not be in the mainstream right now, indie games designers and studios have never lost the passion for making games full of adventure, puzzles and most of all a great narrative! So this brings me nicely on to SCAB…

SCAB (Super Comedy Adventure Bargain Bundle) is a collection of 7 indie point and click adventure games, with a common theme of humour being an important part of the game! Humour is a massive part of many point and click games and when it’s done right, it elevates the game even further. So what about the games in this bundle? I can tell you that if you enjoy point and click games, then you can’t go wrong with this great bundle! These indie game designers and studios have created some outstanding games, and this bundle, in particular, gives you a wide range of different styles and stories.

So let’s look at them, shall we? 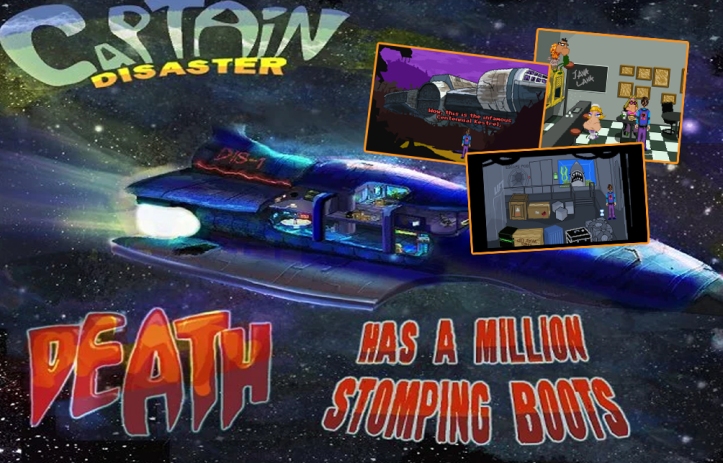 Captain Disaster in: Death Has A Million Stomping Boots

Be a space captain who unwittingly puts the galaxy in danger, and as a result, has to save it!

“Captain Disaster takes a job delivering a package from Acturus-1 to Proboscis Major – not realising that he is actually transporting something that will put the entire galaxy in danger! Our intrepid nitwit investigates interesting peculiar people, puzzling places and panicky problems along the way to saving the day, once he finally realises that something is wrong. Expect lots of laughs and head-scratching dilemmas before you reach the shocking conclusion.”

I LOVE this game, it’s a real blast! If you like SCI-FI and comedy them this is the perfect game for you! It’s genuinely funny, has a great story and the game is everything you want from a point and click! I could go into lots more detail, but why don’t you just read our FULL REVIEW

The Adventures of Bertram Fiddle

Be an explorer who tracks down a serial killer in a quirky take on Victorian London!

“In a quirky take on a Victorian London inhabited by mysterious, strange characters, self-proclaimed leading explorator, Bertram Fiddle, finds himself in a bit of pickle. Help him follow the clues and track down the elusive serial killer known only as Geoff the Murderer before he strikes again.”

Straight out of the gate you cannot help but be amazed by the unique and colourful character designs! This game has an outstanding aesthetic which immediately grabs your attention. The story and world are really immersive and who doesn’t love a classic comedy murder mystery ‘who done it’? Stay tuned to our YouTube channel in the future…

Be a hero on an epic quest to find a mythical leader, the only one who can restore peace to a troubled land!

“Legend of Hand tells the story of a hero on an epic quest to find the mythical Grandmaster Hand, the one man who can restore peace to a troubled world. Inspired by adventure classics, Far-East legends and martial arts beat ’em up games of the 80’s and 90’s, this point and click adventure will take the player on a unique journey through magical lands.”

As well as the standard point and click the game also features a turn-based RPG style fighting system! The unique ‘pencil drawn’ design is a really nice touch, very different! If you’re looking for a game to really put some hours into, then this is the game for you! As well as the 10+ hours of game time, it features a host of memorable characters, puzzles and mini-games to keep you engaged throughout your playthrough.

The Beard in the Mirror

Be a 22-year-old drifter trying to find his identity who finds himself plunged into another world!

“What do you want to be when you grow up? Paul thought his life would be set after college, but at 22 he’s toiling away in a job he doesn’t like and coming home to an empty apartment every night. He doesn’t know who he is, where he’s going, or how he fits into his world.

But then on one dark and stormy night, a mysterious woman appears to him, and everything changes…”

It might look a little basic, but boy does this game give off that old-school vibe! I’ve played many games like this back in the day, and this immediately tugged on nostalgia strings. You can feel the passion that has gone into this meticulously crafted game. It’s been a while since I’ve played a game that uses the classic points system, so this was yet another nice throwback. This game is definitely one for point and click purists.

Yet Another Hero Story

Be YET ANOTHER HERO in a fantasy land!

“A noble lady has been abducted and only a hero can save her. That hero shouldn’t be Martin McNish but life has an odd sense of humour sometimes. It is your task to help Martin, become a hero!”

You only have to look at these screenshots to instantly get that Curse of Monkey Island vibe! The 2D cartoon-style design is so well done and one that I, personally, really enjoy. It’s not an easy thing to do, and you rarely see it these days. So when a game likes this comes along, it’s difficult for me not to throw myself at it! As with all the games in this bundle, the humour is on point and the story is really engaging.

Once again, stay tuned to our YouTube channel in the future…

Be a Clam Man. Half-man, Half-clam. Just imagine the possibilities…

“Clam Man is the story of the Clam Man. Intriguing, isn’t it? Yes, it’s true – he is a clam and yet also a man. This is not a topic of debate, it is fact. We’ve confirmed it while working on this game. Using science.”

This game… it’s an interesting one! Unique to say the least, but the surreal setting and characters are what makes this game so appealing. This is the sort of unhinged ‘out-there’ game style that makes the Sam & Max games so memorable. Clam Man is packed full of puzzles, crazy characters and a really well-worked soundtrack. Be it on YouTube or via Twitch, this is one game we HAVE to share with you!

Trails and Traces: The Tomb of Thomas Tew

Be an investigator caught in a plot involving mystery, intrigue and maybe pirate treasure…

“In 1695, Tew and his fellow pirates pursued a Mughal ship. His ship, The Amity, attacked the ship, the Fateh Muhammed. Tew was disembowelled by a cannon shot and died instantly. Or did he? Present-day. Private Detective James Labbett takes a missing persons case, which unexpectedly leads to an adventure of discovering the truth of what happened to the pirate Thomas Tew, but he isn’t the only one who has an interest…”

If your looking for a game to scratch your Broken Sword itch, then Trails and Traces is definitely worth a look! It’s not the longest game by any means, but for a couple of hours, you can have a lot of fun! The classic environments smack of the early LucasArts style and if you really take your time with the game, you can find plenty of little hidden gems!

If you enjoy point and click games or like to help out independent game designers and studios, then this bundle will make a welcome addition to your collection! The games may differ in story and design, but what they have in common is great storytelling, warm humour and are very enjoyable to play! So why don’t you go on an adventure today?