I think this week’s episode of The Walking Dead is, easily, one of my favourites so far in Season 10! I have said for awhile now, that the horror has truly been brought back into the show, and the events that unfolded in ‘Stalker’, took that notion and turned it up to eleven!

This episode was split between three narratives – Alexandria, Beta’s mission and Alpha and Daryl out in the woods. Not one of these elements can be singled out as being ‘the weaker one’, as they were all individually excellent, which lead to a overall outstanding episode of The Walking Dead!

So, lets get to the review shall we?

Thanks to the events of last week, Daryl is very highly charged right now. He needs to channel these painful emotions that hes juggling in some way. How about a showdown with Alpha? That’ll do the trick!

Alpha and a group of Whisperers are doing their thing near the cave, all nice and cosy right? Wrong! Out of nowhere, Daryl strikes, taking out all of Alpha’s goons. He manages to get a few blows in, but suffers a knife in the leg and a cut across the forehead for his trouble. With the blood pouring down his face, obscuring his field of vision, he is forced to retreat. Alpha is more than eager to give chase tough, and with both of them struggling with their injuries, Alpha, very cleverly, calls for back-up! She bangs her shotgun on the wall to try and attract Walkers and she is successful! As the Walkers pour-in on Daryl, he must use whatever he can find to stop them. He even has to resort to removing the knife from his leg and use that, thus allowing the blood to start gushing from his, now exposed, wound. This entire sequence was unbelievably intense and credit must go to both Norman Reedus and Samantha Morton who did an incredible job!

As Alpha starts to lose consciousness, Lydia appears! It is initially painted to the audience as an hallucination, but it soon becomes clear that it is, in fact, real. Alpha is ready to accept death and wants Lydia to be the one to do it. We are then treated to some powerful lines such as “I’m not here for you” and “your way Is not the only way.”It’s a big character moment for sure, and she leaves Alpha alone and helpless.

So what now? Alpha’s ominous final line “We are the end of the World” would suggest that the Whisperers are going to retaliate. This can only be a good thing for us, the audience, because the pace and chain of events is unrelenting, which makes for very enjoyable television. As for this particular sub-plot, I thought it was fantastic! It was so tense and so well acted. We got some big character moments and, once again, the Walkers felt like a very real threat. Great work!

A Nightmare on Friday Halloween Street (AKA Alexandria)

As the above sub-heading suggests, the show goes into full HORROR MODE, for the Alexandria and Beta storylines. Rosita is having nightmares and Beta is about so cause them to become very much a reality!

Gamma has made it to Alexandria, but without Aaron there to vouch for her, she faces stubborn resistance from both Gabriel and Rosita. Despite telling the truth, Rosita clocks her one, and they take her to the prison. Once there, Gabriel goes into ‘bad-ass’ mode and it is sensational! He is taking no s*** this season, with the chilling retort of “I’ve spoken to God. He told me to hang you”, shooting down Gamma’s jibe. Gamma tells them that she killed her sister and you can tell that Gabriel is ready to believe that she has told them everything. Rosita, understandably, is not so eager to start believing anything when it comes to the Whisperers. This changes by the end of the episode when the pair head off to hilltop together.
Just like with Negan, Judith appears from the window above the cell and starts up a conversation with Gamma, who I will now refer to as Mary because it is clear that she has shifted allegiances and is acting as such. This was a nice little scene and the way they use Judith in these moments is fantastic.

Gabriel and Rosita lead two teams to find the others, and not only does he give Rosita his hat, but he utters the ominous line “I’ll see you soon!”. I mean, it could be a fake-out, but Gabriel’s head feels very much on the chopping block right now.

As for Beta, the man doesn’t need to say anything to be a terrifying presence on screen! Easily the stand-out star of the episode and he barely spoke a line of dialogue!

We cut to Cheryl’s grave, and in true horror-movie fashion, a hand bursts out of the soil. Now in full WWE Undertaker mode, he rises from the grave, and we are treated to a stunning wide-shot of Beta, removing his blades and with his trench coat, flapping in the wind menacingly. On guard patrol, Alfred and another Alexandria red-shirt comment that the Whisperers are no real danger once on their own. Slightly out of focus, we see Beta in the building behind them. He turns off the lights and what follows next is a blood bath! He takes down multiple Alexandrians, allowing them to turn. I loved the way he just sat among the bodies as the newly-reanimated Walkers rose up and headed into the street. Once at the jail, it looked like there was no way out for Mary. That was until Laura arrived! And here comes the one part of the episode that was bad! She didn’t stab or incapacitate him, thus allowing him to overpower her and killing her in the process. She was one of Negan’s top lieutenants, she is a trained killer, but in this case she acted like  a complete inexperienced novice. I hate when they do this in movies and TV. It’s just an avoidable and very unbelievable situation. Thankfully, this would be the only blemish on the episode. 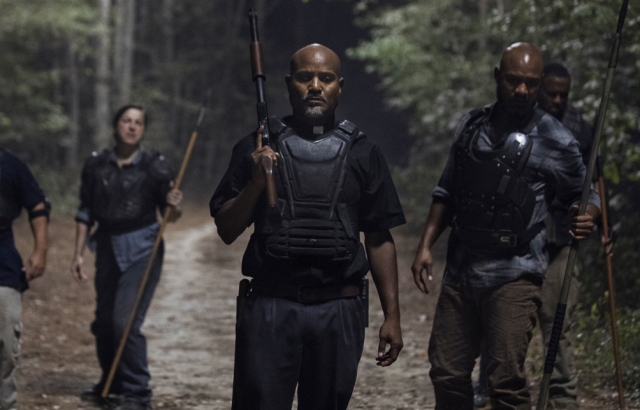 The next scene was easily the highlight of the entire episode. Beta is tracking down Mary inside the house. This was Horror Movie 101, as the hulking monster chases down his victim, who is in hiding. The use of silence and lack of editing-cuts, allowed the camera to tell the story. It was intense and exciting in equal measure! All of a sudden, Beta hits the deck, having taken a bullet from behind a closed door. Thanks to some great framing, we see that it was Judith who took him down. But, in true horror movie fashion, the killer never stays ‘dead’. Beta reveals to the audience that he is wearing a bullet proof vest. Smart move! As the chase continues, Beta comes face to face with Rosita, and it’s time for her to tackle the man who has haunted her dreams. Just as it looks like Rosita is about to be defeated, Mary threatens to kill herself, meaning Beta would fail his mission. And Beta cannot disappoint Alpha! Hopefully Mary’s actions will help with Rosita’s perception of her, but we’ll see. Just as it looks like Beta has completed his mission, in the woods he encounters Gabriel’s group. Mary, very cleverly drops to the ground, allowing her to be saved and for Beta to flee into the woods empty-handed and his mission a failure. With both Beta and Alpha taking some very serious blows, next week could be very explosive indeed!

Overall, this was an incredible episode of The Walking Dead and is a shining example of the new heights the show has reached. They stuck the landing of all the stories they setup in this episode and did so in style! The camera work was some of the best we’ve ever seen and I want this to now be the benchmark for the rest of the season.
The episode was brilliant from start to finish and, a part from Laura’s frustrating indecisiveness, there wasn’t a misstep in the entire episode. The events just witnessed have set things in motion that cannot be undone and I cannot wait to see what they show has in store for us next!

What now for Alpha and Beta? Let us know your thoughts on this week’s episode in the comments!