If you haven’t seen Deadpool yet, then we strongly urge you to. Like, seriously. Go now.

One of the key questions was could the film live up to the hype of the film’s advertising? The answer is yes.
One of the great things about the build up to the release of Deadpool was the promotion. The adverts, one off videos, the alternative genre posters, it had the lot.

The story was kept simple and with the standard beats you’d expect from a superhero origin movie. In terms of the films style, first time director Tim Miller did an impressive job. You could tell he pulled a lot of his style from the previous work as a title sequence director.

You could spend a lot of time talking about Ryan Reynold’s performance, but we will try and keep it short. It was fantastic. He really understands the character, and it’s very difficult to now think of Deadpool and not think of Reynolds. It was the role he was born to play.

The supporting cast, on Deadpool’s side at least, had a good mix of acting and comedic talent. All of whom seemed to play off each other which really helped the movie.
The downside came with the very generic villains. It seems that no matter what studio is producing a Marvel film, Marvel just cannot do a good villain.
Ajax, played by Brit Ed Skrein, was your typical Marvel cookie-cutter villain who will be forgotten very quickly. His hench-woman Angel Dust, former MMA star Gina Carano, really struggled in the role. For someone of her fighting background you would have hoped for a more convincing performance in the fight scenes. 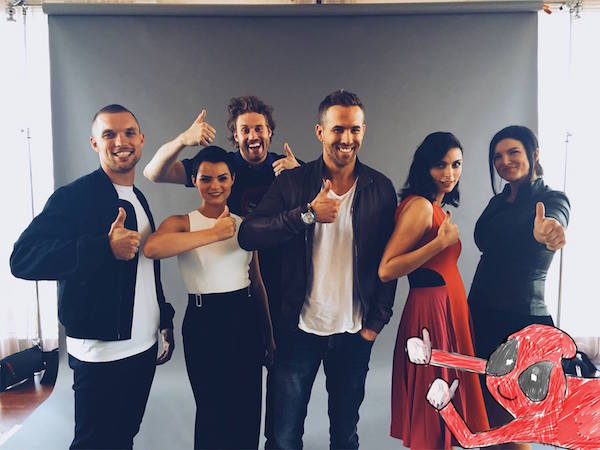 Deadpool is a modern superhero movie that will stand out, there is no question about that. The fourth wall breaking, the humour, the violence and language, it is something we haven’t seen before in terms of a modern comic book movie.

The in-jokes and gags all worked for the most part, some did not translate because they were aimed at an American audience, but those things are to be expected.
The film was very self-deprecating and it was done in a way which it really helped enhance the film.
Maybe there was one too many X-Men namedrops, but it was understandable in terms of Deadpool being a character not everyone would know much about. But even this issue was made a joke of by Reynolds in the end.

Like with all Marvel films, Deadpool does have a post-credits sting. But keeping with the rest of the film, it makes a joke about the premise of a post-credit scene. It is worth watching though as it reveals a little nugget of casting news for the, already green-lit, sequel.

Does the film have a wider audience appeal? Maybe, but maybe not.
Beyond the target comic book audience, beyond those interested in action films, there isn’t much that could entice a broader audience to the film.
While the in-jokes were executed to perfection, to a non-fan or someone outside of the genre these jokes can be easily missed.
This would be the only genuine criticism of the film, and even that is a very miner niggle. But given how it’s performing at the box office right now, it doesn’t seem to be an issue.

Deadpool is a stylish, action packed superhero movie lavished with plenty of humour. You will laugh, cry (with laughter) and wince from the pain that Deadpool dishes out to those who have wronged him. Bring on Deadpool 2!