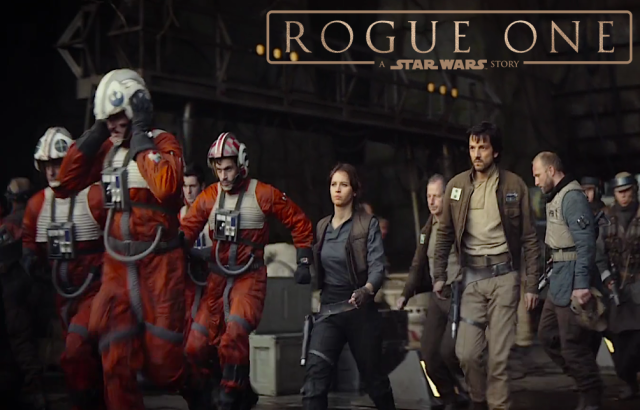 It’s crazy to think that we now live in a world where we get a new Star Wars film every year. What a time to be alive.

Last Christmas we had Star Wars: The Force Awakens, you can read our review here, but this Christmas, Santa is bringing us another kind of Star Wars movie.

We are getting our first anthology film, Rogue One: A Star Wars Story – But for ease of writing, we are going to be using the more commonly used name, Star Wars: Rogue One.

Before reading any further, if you haven’t seen the trailer yet (and why haven’t you?) – Then you can watch it below:

The film is directed by British director Gareth Edwards, whose films include Monsters & Godzilla (2016). Unlike previous Star Wars films, the films cast is an accomplished ensemble featuring some incredibly talented actors. This isn’t to say previous actors weren’t good, far from it, it’s just when you compare all the casts together, Rogue One stands out as a clear winner.
When your cast has the likes of Ben Mendelsohn, Forest Whitaker and Mads Mikkelsen you are definitely doing something right. And that’s without mentioning the extremely talented Felicity Jones and the legend that is Donnie Yen!

The Force Awakens did a phenomenal job of delivering the look and feel of classic Star Wars. Rogue One has taken that to whole new level.
The sets, the costumes, the sounds…everything feels and looks like A New Hope. From the classic Star Destroyer to the amazing Gonk droids. 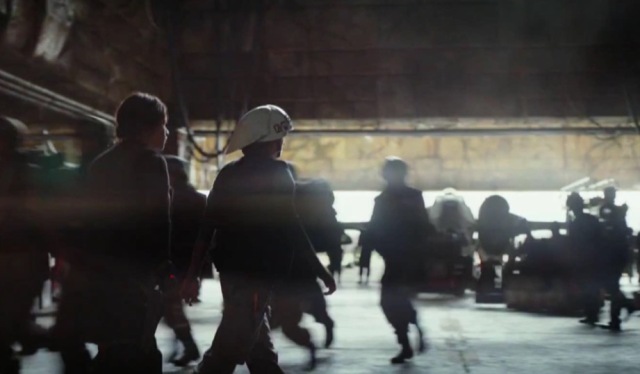 It’s clear that the tone of Rogue One will stand apart from The Force Awakens, as this is a straight up war movie. It’s going to be like the Battlefront games, with more focus on non-force users. So don’t expect to see any lightsaber fights!

It’s going to focus on normal Rebel fighters taking on the Empire, and spoiler alert….they accomplish their mission and steal the Death Star plans. But how they do it, and how many people we lose along the way is where it gets really interesting.

There was nothing really negative to say about the trailer. The “I rebel” line was the only thing that stood out. It was a little cheesy, we saw how bad-ass her character is going to be, we didn’t really need the line. But this is a teaser trailer, they’ll fix that when the story trailer comes out. You can’t really form an opinion on how a character is going to pan out in a teaser trailer.

Oh, and another Star Wars film with a female lead? Why not? As long as the story for a lead character in a film is good, then gender, ethnicity, sexuality and anything else you want to bring up is redundant.  All we want is good storytelling and classic Star Wars. It’s sad that in 2016 that we still have to talk about things like this.

With all that being said, let’s move on to some key points from the trailer. We will mention the Extended Universe during our breakdown, and yes we know Disney removed the EU from the canon, but it doesn’t mean they aren’t still taking from it.

Return Of The Moth

We get to see Rebel Alliance leader Mon Mothma, who was first introduced in Return Of The Jedi.  Interestingly enough they have cast Genevieve O’Reilly, who played Mothma in Star Wars: Revenge Of The Sith, but her dialogue scenes were cut from the theatrical release. She does appear in the theatrical release, but she is only seen on screen.

Hopefully the character is explored in more depth, rather than being remembered as that ‘ginger lady who go emotional over some Bothans’.

Here we have Diego Luna standing in the Rebel control room. Looking at the patch on his chest, it suggests that his rank within the Rebel Alliance is that of a Captain. But like most of the Rogue One cast, their character names are still a mystery. There is a theory that he is playing Biggs Darklighter, Luke Skywalker’s friend and who is gunned down in the final trench run in Star Wars: A New Hope.

It took them awhile, but the Death Star is finally complete! While it’s impressive to see the superlaser dish fall in to place, if only they spent an extra day covering that thermal exhaust port. But joking aside, to see the classic Death Star, surrounded by Imperial Star Destroyers, just fills you with child-like awe. 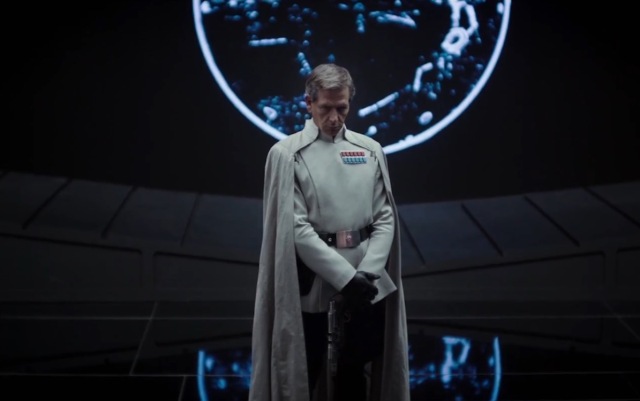 Ben Mendelsohn is another character that is yet to officially be named, but from what we can tell, he is in the command room of the Death Star. He also has, what appears to be, a solid silver blaster in his hand. Some have said it’s a lightsaber on his belt, but this is highly unlikely.

Given his outfit and badges, it suggests that he holds the rank of Grand Admiral. Some have said he could be playing a version of Grand Admiral Thrawn, minus the blue skin. This is possible, but he’s more than likely a new character that we haven’t seen before.

He also wears the cloak the same way as General Hux from The Force Awakens, fueling rumours that he could be a Hux. It’s a nice theory, but in the Expanded Universe it was not uncommon to see high ranking Imperial officers wear their cloaks like that.

The classic Stormtrooper! While it was nice to see the new design of The First Order Troopers, to see the classic look back on our screens is really exciting.

As you can see in this clip, they have what appears to be a tank being driven by a new-look Stormtrooper. These might be specialist troopers that are in the Imperial Army’s tank or armoured transport division. In the Expanded Universe there were numerous different unit types, so it’s nice to see them bringing something new to the film. 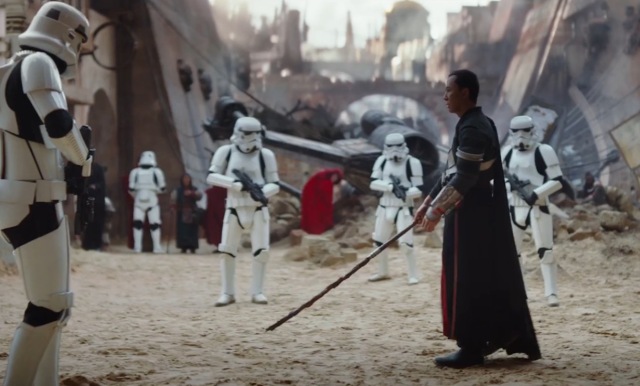 Another character that we don’t know the name of, but it has been speculated that he is some kind of blind mercenary or bounty hunter who has been hired to be part of the team. It’s even been suggested that he might be force sensitive, but again we can only speculate.

There have been rumours for awhile that Darth Vader will appear in Rogue One at some point. And while it’s more than likely just going to be a cameo, this scene in particular has got plenty of fans talking.

We see a dark cloaked figure kneeling at what looks like some sort of cryostasis tube. Some people believe the figure to be Darth Vader, but the hood doesn’t really fit the theory. It’s also unlikely that its Vader in the tube, as there are two of the Emperor’s Royal Guard either side. The likely guess is that its Palpatine inside the tube, possibly a way to prolong his life?

The hooded figure could be Mads Mikkelsen’s character, as we don’t see him outright in this trailer. He’s usually cast in the antagonist role, so this could be him. An Imperial Inquisitor perhaps? 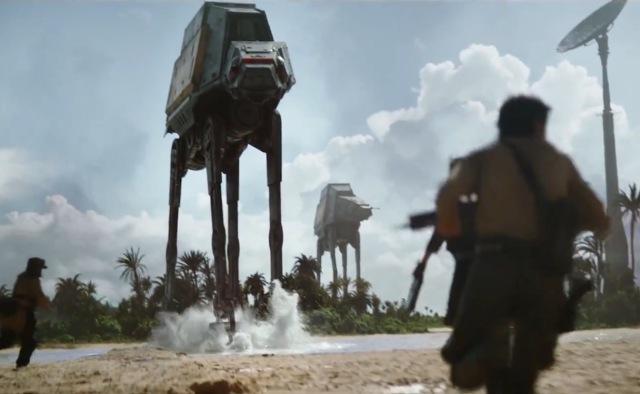 The teaser has one final action scene up its sleeve and boy did they save the best for last!

Seeing the Rebels charge out towards the AT-ATs was just an incredible final action sequence. It felt like you were playing Battlefront, it just hammered home that this is a war movie. It’s going to be dirty and gritty, fast and epic.

The walker reveal was not too dissimilar to a few scenes in Edwards film Monsters, and a scene or two in the Godzilla remake. He’s really good in the way he commands the camera on screen, and this scene was a prime example of that.

We also love how Felicity Jones charges out with both her blasters down by her side. It just looked so good. More of this please!

Not So Double Agent

We end with Felicity Jones (Jyn Erso) wearing what looks to be a Tie Fighter Pilot uniform with some batons on her back. The setting looks Imperial, and this could be a scene inside the Death Star.

In any case, it was a visually striking shot to end the teaser on. There have been some negativity towards the look, saying she looks like Katniss from The Hunger Games movies, but we’re not really buying that, it’s a lazy comparison.

It’s also worth mentioning the mix of The Imperial March and Star Wars theme as the title appeared at the end. This was masterfully done and only helped to enhance the expectation and excitement for Star Wars: Rogue One.

It will be a few months until we get a first full trailer, but in the mean time, what we have been given is very promising indeed. We cannot wait to see what happens in the next trailer.

IF Darth Vader is indeed set for a brief appearance in this film, then hopefully they keep him out of the trailers. You can show him but not show him, all we would need is to hear him breath, just the once. That would sell it.

And just for fun…

Clearly some construction went wrong somewhere, as we can see that the superlaser part of the Death Star is already partially constructed by the end of Revenge Of The Sith, yet in Rogue One it’s the last piece of a big gaping hole. Guessing some poor Imperial architect  got force choked for that one!

Looks like Forest Whitaker has been walking through The Wasteland and joined the Brotherhood of Steel from the Fallout games. Nice power armour!

Did you like this trailer? What are you looking forward to most? Tell us in the comments below.

One reply to “Star Wars: Rogue One Trailer Reaction”