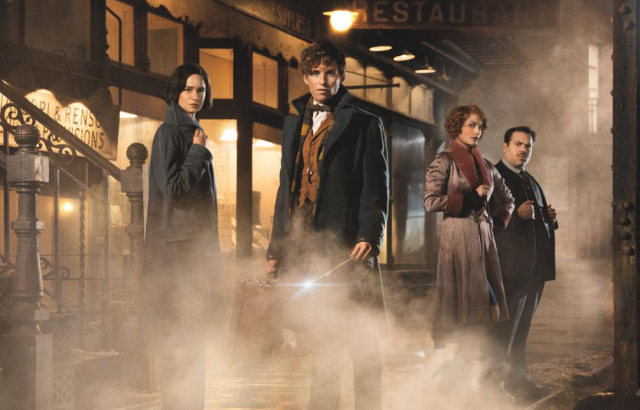 Get ready to return to the Wizarding World of J.K. Rowling, as the first full trailer for Fantastic Beasts and Where to Find Them has finally arrived.

If you haven’t seen the trailer yet, you can watch it below:

Set 70 years before Harry Potter arrives at Hogwarts, the film follows Magizoologist Newt Scamander (Eddie Redmayne) as he arrives in 1920’s New York for a meeting with the Magical Congress of the United States of America.
He carries with him his trusty magical suitcase, which houses an array of dangerous and unusual creatures. While in New York the creatures escape, causing great tension between the magical community and the muggle extremist group New Salem Philanthropic Society.
Everyone is now after Scamander, and with the help of witch Porpentina Goldstein (Katherine Waterston), he must try to hunt down the creatures before either side can catch up to him.

J.K. Rowling has said that this is not a sequel or prequel film, but a continuation of the Wizarding World. This will be the first film in a trilogy, with future films pencilled in for 2018 and 2020.

As this is a spin-off film, it does open the possibility to a range of future film projects. Could a return to Hogwarts be on the cards? Either in a pre or post-Harry timeline. If the films do well, there is every possibility.

At the helm of Fantastic Beasts is David Yates, who directed the last four Harry Potter films (The Order of the Phoenix, The Half-Blood Prince and The Deathly Hallows Parts 1 & 2).
Having a director such as Yates on board will be beneficial to the film, as he already has experience working within the Wizarding World. Tone, style and pacing should all come natural to him, and he should be able to deliver what the fans want.

We have chosen some key scenes that we think stood out the most during this trailer. Don’t forget to tell us your favourite bits in the comments!

As we are introduced to Newt Scamander for the first time, the voice over (Colin Farrell) makes it clear that you are watching a film set in the same world as Harry Potter.

Hearing “Hogwarts” and “Dumbledore” instantly brings all the happy (and heart-breaking) memories flooding back, from the films and the books.

John Williams originally composed ‘Hedwig’s theme’, which has gone on to become known as the main Harry Potter theme song.
In the first teaser for Fantastic Beasts, they used a variation that sounded a little similar to it, to give you that sense of familiarly.

In this trailer, they’ve removed the hint and gone for the theme outright, with an updated composition of this very recognisable song.
It was the first real moment when you felt like, ‘Yep this is going to be great.’ A real goosebumps moment.

Newt has a Niffler! Nifflers first appeared in the book Harry Potter and the Goblet of Fire. They are magical creatures that love to hunt for treasure and are attracted to shiny and metallic objects. This explains the purse!

We can take a guess that it is this Nifflers little hands that we see prying open Newt’s suitcase at the start of the trailer.

Colin Farrell is playing Percival Graves, an Auror of the MACUSA, whose job it is to hunt down Newt after the beasts escape from his suitcase. Here we see him casting a powerful spell at something or someone off screen.

Farrell’s character is an interesting one. He’s essentially a good guy whose been sent to track down another good guy. And while nothing in the trailer indicates otherwise, Farrell does play a good villain. A double agent? We’ll have to wait and see.

The final scene in the trailer see’s Newt head in to his suitcase and down the ‘stairs’ inside. He waves to Jacob Kowalski (Dan Fogler) in the bed to follow him down.

It was clever to use this as the final image, as the camera angle suggests that he is in fact signalling to you, the viewer, with the hope that you will follow him on a brand new adventure set in the Wizarding World. A very clever edit.

The first full trailer for Fantastic Beasts and Where to Find Them perfectly introduces new characters and a new story, in to a world we already know and love.