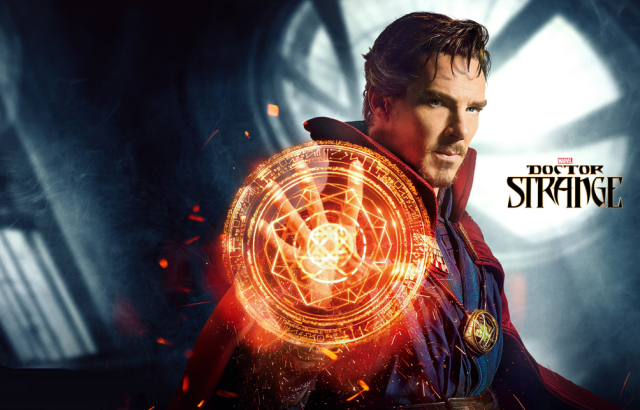 Last night we finally got our first look at Benedict Cumberbatch as Doctor Strange, and it was simply breathtaking.

If you haven’t seen the trailer yet, you can watch it below:

Doctor Strange is another one of Marvel’s more niche properties, much like Ant-Man and Guardians of the Galaxy. But like the two examples right there, being niche doesn’t mean that the movie won’t be a hit with a wider cinema audience.

At face value you could think that the general film audience might not take to a superhero movie about magic and sorcery. But then you remember we live in a world where we have Harry Potter. There is no way this film will not reach a broad audience and be a financial success. After-all, slap ‘Marvel’ in front of a film and people will go see it right?

Take away the mind-bending visual effects in this teaser, you’re still left with a cast featuring Benedict Cumberbatch, Tilda Swinton, Chiwetel Ejiofor and Mads Mikkelsen. Having these amazingly talented actors in one film is going to be something very special.

Ok so there are they comments about how it looks like Batman Begins and Inception. Or that Cumberbatch sounds weird with an American accent. But you’ll forget the accent by the time the first full trailer comes out.

We are yet to see a film like this in the MCU, and we cannot wait to see more.

We have chosen some key scenes that we think stood out the most during this trailer. Don’t forget to tell us your favourite bits in the comments!

This bit is all conjecture based on a long standing rumour that has never been confirmed or denied, so it’s just a theory.

Steven S. DeKnight was the showrunner on the first season of Daredevil. His intention was to have Rosario Dawson’s character become the comic book character Night Nurse. But DeKnight was told from the powers above that the character of Night Nurse was needed for another property.

Now, in the comics, the most well-known version of Night Nurse is Linda Carter, who is very much associated with Doctor Strange.
While she may not end up playing Linda Carter, we could still see McAdams take on the mantle of Night Nurse. With Infinity War a few years away, you can imagine that that our band of superheroes will need to have some healing hands on the battlefield.

“Your soul is mine”. Well not quite. But the newly bald Tilda Swinton does appear to knock Strange’s soul right out of his body.

We’re hoping that this is a nod to the fact that Strange (in the comics) can use astral projection, very helpful when spying on his enemies and moving around unseen.

It’s going to be very interesting to see the use of magic and sorcery in the MCU. It’s not been explored yet, and with Strange being such a powerful and mystical character, it will be fascinating to see how the wider audience takes to it.
Some critics think this will be the film to finally mark ‘the downfall’ of these kind of movies, as they move in to more niche characters.
But they said that about a space movie with a talking tree and a movie about a guy who is friends with Ants.

Kilgrave. Fisk. Two brilliant villains, but two characters that are on Netflix and not in the MCU. Marvel can do a good baddy on the small screen, but they still appear to struggle creating one for the big screen.
“But Loki”…oh come on, maybe for one film, but Loki has transcended from the role of the antagonist. He’s too loveable.

For whatever reason, Marvel struggle to create a genuine threat with their villains. And even when they cast good, the villain is still easily defeated.
Now with the casting of Mads Mikkelsen you’d think they might finally have it nailed! But you just never know.

It’s also worth mentioning that some people believe that the dot in Mikkelsen’s, as of yet un-named, character’s forehead is an Infinity Stone. But who knows?
Marvel chief Kevin Feige has hinted previously that Strange’s signature locket the Eye of Agamotto is extremely powerful, so it could be that an Infinity Stone appears somewhere in the film.
It would make sense from both a story point of view and a way to tie the film to the rest of the MCU.

The one clip where every goes “that’s like Inception”. Yes it is, but it still looked amazing. There were a few shots in this short teaser to suggest things are definitely about to get very strange indeed! (Sorry, not sorry).

Doctor Strange has the chance to be a truly unique Marvel movie, there is plenty of different and distinctive source material to work with. Just like with Guardians and Ant-Man, being a niche licence will allow them to have a lot more fun with the film and bring something we haven’t seen before to the table.

The Red Cape Is Coming

As this will be an origin movie, the question is how much time does he spend inside his costume? Could this be a final scene in the movie itself?

We have seen photos of Cumberbatch filming in the full costume. So it’s more than likely that the final act of the film will see him in the outfit after completing his training, and for the boss fight at the end. That Cloak of Levitation would come in handy!

An exciting teaser that showed you a different side of the MCU. A strong cast and unique style makes Doctor Strange one to watch with anticipation.