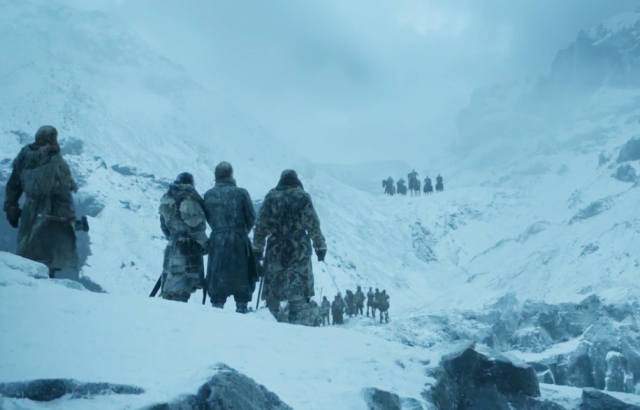 Here’s how I write these reviews.

I have the US/UK simulcast showing of Game of Thrones on series link. I then get up at 5:30 am on a Monday to watch and make notes before I set off for work. I then have around thirty minutes to write the review before the day job begins. That was until this week when Episode 6 was frustratingly leaked and distributed online. Someone I followed on Twitter posted photos and a video of the episode. I inadvertently saw the all the episode’s key moments. I was robbed of any joy, sadness or fulfilment.  So, I write this review five days before the official release. I will try my best to put over the positives, but because I had the episode spoiled, by enjoyment was lessened. This has left me angry and frustrated.

With that being said, onto the review. With so much happening beyond the wall, I will get Winterfell and Dragonstone out of the way early doors. 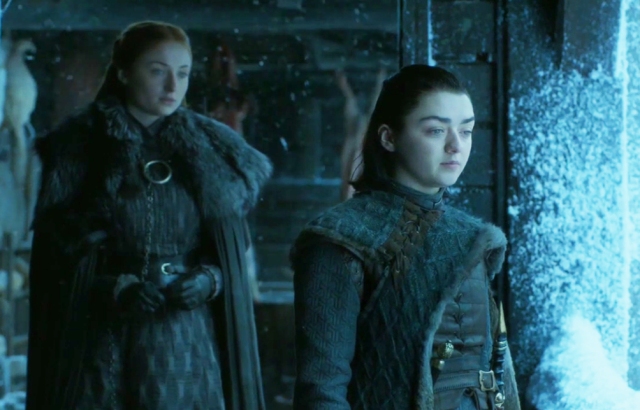 The ‘faux-drama’ at Winterfell was pushed a little towards real drama this week, but not quite. Sansa and Arya continue to bicker. Arya becomes increasingly angry at Sansa after showing her the note and continues to accuse her of disloyalty towards Jon. Sansa also finds the ‘faces’ hidden in Arya’s chambers. Arya’s creepy smile is also beginning to wear a little thin. But credit to both Maisie and Sophie here, they play the whole sibling rivalry very well, even if sometimes it’s a little silly.

Littlefinger continues to bend Sansa’s ear, but I still think Sansa is playing him. This despite the show indicating any of this. I just feel they will turn around and give Sansa a big moment to put over her ever growing powers of deception. But again, they have done nothing to justify that with the story, so if they do go that way, it will make little sense. Sansa is also in total bitch mode with Brienne. I was wanting Brienne to dish out some ‘Hound Justice’, with a particular move in mind that Brienne knows all too well.

At Dragonstone, Tyrion spots the potential romance between Dany and Jon. While Daenerys denies it, we all know they are going to, well, you know. Other than a later scene when Dany is wearing an amazing white outfit, she wasn’t all that endearing here.

She continues to blame Tyrion for the losses at Highgarden and Casterly Rock. And she seems to be refusing his sound counsel at every turn. Just as with Sansa, there was a definite whiff of petulance and impatience. With Dany so eager to rush into battle, Tyrion rightly wants to discuss the idea of succession. Dany reacted pretty much as expected. She is so hot headed, it could possibly be her downfall. (Though it won’t be. We all know she is George R.R. Martin’s fantasy character and she will end up on the throne.)

Beyond the wall, ‘The Fellowship of the Snow’ seeks to find a wight to take back to King’s Landing. It all starts off really well. Tormund takes great pleasure in winding up Gendry, The Hound and just about everyone he talks to. These scenes really added warmth and humour, which would be in short supply for the rest of the episode. One moment I was desperate to see, however, was Jon offering up Longclaw to Ser Joarh. And thankfully they delivered. In a moving scene, Ser Jorah appreciated the offer but ultimately rejected the sword, leaving it in the hands of Jon. I loved this scene. Beric and Jon discussing resurrection was also a nice little exchange.

A brutal un-dead bear attack took out some wildling red shirts. It also clamped its jaws into Thoros. His screams were visceral. Thanks to Beric’s flaming sword, he not only managed to dispatch the bear, but he was also able to cauterise Thoros’ wounds. The level of cinematography during all these snow scenes was pretty impressive, and some of the shots, especially during the fight scene with the bear felt very real. 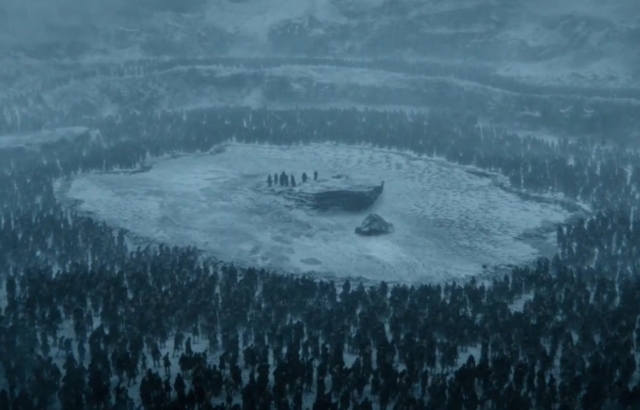 After spotting a wight patrol lead by a White Walker, the fellowship attack. As Jon slays the White Walker, the majority of wights around it instantly die. So it turns out that if you kill a White Walker, those it has turned also die. Handy! Just as they secure the captured wight, the army of the dead approaches and Jon sends Genrdy off back to Eastwatch to send word to Daenerys. Well, that’s Genrdy safe! I did have a suspicion that he would fall. But I’m glad he didn’t.

The remaining members of the fellowship take refuge on an island in the middle of an ice lake. Soon surrounded by the dead, all looks lost for our heroes. The next morning, Thoros is granted a peaceful off screen death as they wake up to see his lifeless body. This would be the only human character of note to die, which is something I did not expect. Despite so many fan favourites walking into certain death, it feels weird that so many survived. This is Game of Thrones, they are supposed to kill off the ones you love. 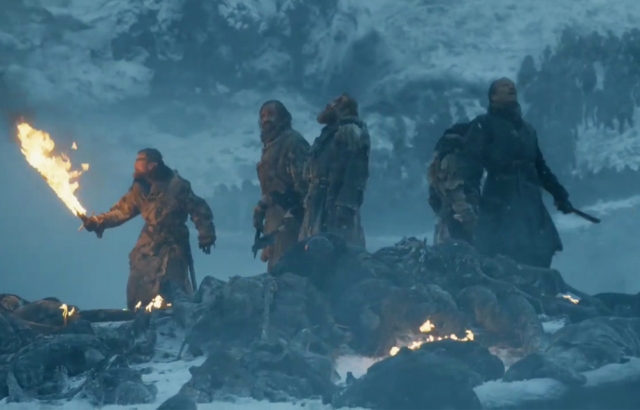 More wildling red shirts fall and in a brutal and well-shot action sequence, Tormund almost bit the dust as well. The way the scene was set up, it was the perfect emotive death scene. I thought he was done for, the brutality of it all, such a horrific end to a well-liked character, it was written in the stars. But despite all of this, he escaped and lives to fight another day. For those of us wanting a Tormund/Brienne happy ending, the dream is still alive!

With the slow motion and sad score kicking in, the odds against the fellowship surviving looked grim. In comes Dany for the fiery save. As there was no Jaime or Bronn in the equation, I enjoyed the dragon attack this week. Seeing all three dragons unleash hell was very satisfying. But just as it all seemed like everything was going their way, up steps the Night King.

With a throw of deadly precision, the Night King’s ice spear impales Viserion and the dragon plummeted to its death. The anguished cries from both Drogon and Rhaegal were gut-wrenching and while I have never been a fan of the dragons, it was still a very sad moment. The stunned Daenerys manages to escape with the survivors, barring Jon, and takes off, shocked and numb.

On the ground, Jon is once again faced with insurmountable odds as the wights advance. Then, Benjen returns to save the day once again. Sacrificing himself, he allows Jon enough time to escape on his horse. Now. Some people will be upset with this, they would have wanted Rhaegal to have saved him, with Jon riding off on his back. While it would have been a nice visual, I just get the feeling that they are holding this off until the finale or for the final season. They have done more than enough to hint at Jon’s Targaryen roots.

Back at Eastwatch, the fellowship breaks. But for one episode at least, we got plenty of nice dialogue and brutal actions scenes with our favourite secondary characters. The rapport and touches of humour between all of these characters were just as enjoyable as the big action sequences. It was the heartbeat of the episode.

The interaction between Dany and Jon was one of the best this season. The subtly of some of the acting was outstanding, and they both conveyed their hidden feelings in a really natural and believable way. I particularly enjoyed the joke about not being able to bend the knee. It was a nice little touch of humour in a very emotional scene. It was such a nice way for the episode to end. Well, almost…

The show ended with the perfect cliffhanger.

The army of the dead pulls the lifeless body of Viserion out of the icy water. As soon as this happened, you knew what was to follow. The Night King walks up and touches Viserion, with the perfect time delay, the eye opens and shines the coldest of blue. We have ourselves an ice dragon! 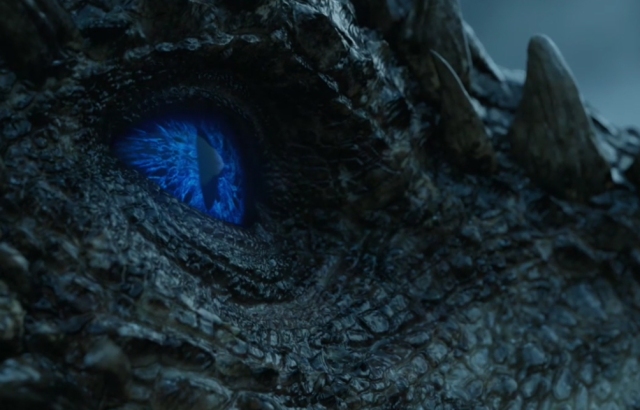 Now, I always knew a dragon would fall this season. It makes Daenerys too overpowered and thus less interesting. With a dragon down, and now fighting against her and its siblings, now it gets interesting. This is what we needed. A leveller.

This episode could have been up there with the likes of Hardhome. And in a way, it’s almost there, in fact, it should have surpassed it. But from a personal level, having the episode spoiled for me took that extra bit of magic away.  With that being said, it was still up there with the best. It was brutal, heartbreaking and yet had the right mix of humour to make for a well-rounded episode.