‘Tis the season and all that. I’m sure many of you will be getting video games from Santa, and as you sneak away from your family on Christmas day to play them, I’m sure they will greatly improve your Christmas bank holiday.

But while games like Call of Duty and FIFA will be put into many stockings this year, they aren’t really ‘Christmassy’.

I have been thinking long and hard (That’s what she said) about the true meaning of Christmas, that being what video games accurately depict this festive time of year? There are games that I had to omit from this list, and I did not do so lightly, but I feel confident that those that have made the top five will be ones you, dear reader, can agree with.

So, without further delay, here are my top five picks for the best Christmas video games.

Playing Batman at Christmas? That’ll do for me. I cannot begin to tell you the number of times I stood on a rooftop sliding in the snow just for the visual of Batman playing in the snow. While by no means the best game in the Arkham series, it did improve the franchise in various ways. The new detective mode was a welcome addition to a character labelled as ‘the world’s greatest detective’. Having to find evidence and piece together various crimes broke up the button-bashing beat-em-up style gameplay.

The most enjoyable thing about this game, however, was their take on the origin of Batman and The Joker’s relationship. Joker’s introduction to the game was phenomenal, and while I would always prefer Kevin Conroy and Mark Hamill to provide the voices, Roger Craig Smith and Troy Baker did a good job overall. The soundtrack was another strong factor of the game, and the number of characters and Easter Eggs within the game was well worked and plentiful.

Any video game ‘list’ I ever do will always include a game from the point and click genre. It’s my favourite genre, and it’s fitting that it comes from a franchise that was part of a group of games that sent me down this path. I first played Sam & Max Hit the Road on PC back in 1993. This was around the same time I was playing games such as Monkey Island and Day of the Tentacle. These point and click games hold a special place in my heart, and when Telltale updated Sam & Max in 2007 I was full of nostalgia. This franchise has such unique characters and a very special game style. So when Season Two kicked off with Sam & Max investigating Santa, I was excited to see what was in store.

The game’s soundtrack is fantastic and the gazillion one-liners and jokes within the game make for a hilarious playthrough. The updated ‘point and click’ style helps improve the games pacing when not in conversation and the driving aspects of the game adds another dimension to the gameplay.

When you ask people what their favourite Christmas movie is, you’ll always get that one person who says Die Hard. A lot of people give it the old eye roll, but tough, it IS a Christmas film, and it also produced a great festive video game.

All the games play out the story of the films on which they are based, but each game switches to a different game style. The first game is a third-person shooter where you had to work your way through the Nakatomi Plaza gunning down baddies and shouting random lines from the film. All this to a classic 90s techno score. Perfection! The second game is a rails shooter, frustratingly controlled by the PS1 controller and not compatible with the NAMCO gun. Despite the controller issue, it’s a fun shooter. The third game has you driving around New York in various cars taking down terrorist cars and undertaking time trial events. As I don’t like driving games, I rarely played the third instalment, but the previous two I played a lot. The different styles of gameplay in one game bundle was a great idea.

The second Batman game to make it onto the list sees us time jump back to 1993 and the outstanding beat-em-up Batman Returns video game. I played this on the SEGA Megadrive and had actually never seen the film. It was only a few years later I was allowed to watch Tim Burton’s Batman Returns. Safe to say I had a few weeks worth of nightmares thanks to Danny DeVito’s Penguin. But the video game I loved.

The game followed the film’s plot for the most part and sees you navigate sideways through several levels beating up Penguin’s goons as you go. The game included iconic characters such as Catwoman and you even got to play one level driving the Batmobile. The environmental attacks were great to use to help take down your enemies and you had a range of classic Bat-equipment to aid you through the levels. While by no means was the game groundbreaking, it was highly enjoyable to play and helped fuel the early stages of my Batman obsession. 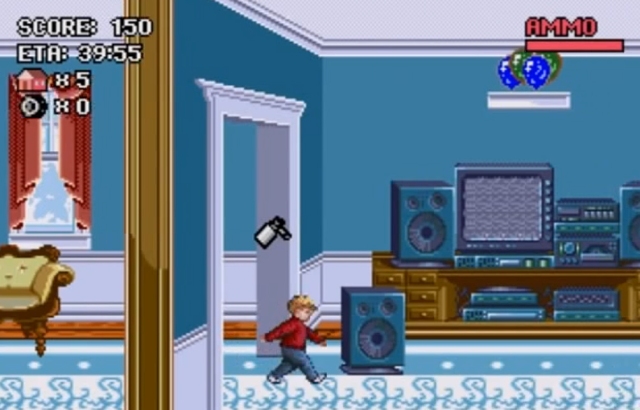 It had to be. The SEGA classic Home Alone spin-off game that sees you assume the role of Kevin McCallister taking on the Wet Bandits. The aim of the game is simple, you have to stop the Wet Bandits from robbing as many houses in the neighbourhood as possible. At your disposal is your trusty BB gun, your limited amount of house traps and your trusty sledge. Before the Wet Bandits appear, you are able to enter various houses and set up traps, but your resources are limited, so even as a kid, you had to apply some strategy.

It was great, not only because it was a fun game to play, but you could also combine items to make better weapons to slow down the Wet Bandits. You also got to zip around the neighbourhood on your sledge in an attempt to track down Harry and Marv. They could even run over you in their van. It was a simple, but highly enjoyable game which had surprisingly plenty of playbackability.

So there are my picks, what about you? What Christmas themed games are on your list? Let us know in the comments below.