Black Panther is currently cleaning up at the Box Office and gaining praise from both critics and fans alike. It made $201.8m in its opening weekend and looks set to become one of Marvel’s highest-grossing movies of all time. So, is Black Panther really that good?

First of all, and there is no escaping this, the film is very political. It plays a large part of the story, with its characters and the general themes of the film. Some people, and by ‘some people’ I mean ‘some white people’, have taken offence to some of the terminology used and notions put forward in the film. I’m not sure there was much to get offended by, to be honest. The issue of race and dealing with historical truths was perfectly accurate and understandable. So anyone trying to attack the movie on this point doesn’t have much of case. The film was attacked previously when the casting was fully announced. “No one will go watch a Marvel movie with a black cast”. Probably the same idiots who said no one would go watch a movie about an Ant-Man.

Following on from this, it is the film’s celebration of African culture that is one of it’s greatest strengths. Every aspect of Black Panther‘s production design was outstanding. The vibrant colours of Wakanda were beautifully sewn into all aspects of the movie, from costume design to the characters themselves. At times, the film was visually breathtaking and the world in which they have created felt truly unique and full of life. To supplement the stunning visuals, Ludwig Göransson delivers a sublime score that really elevates the movie to the next level. 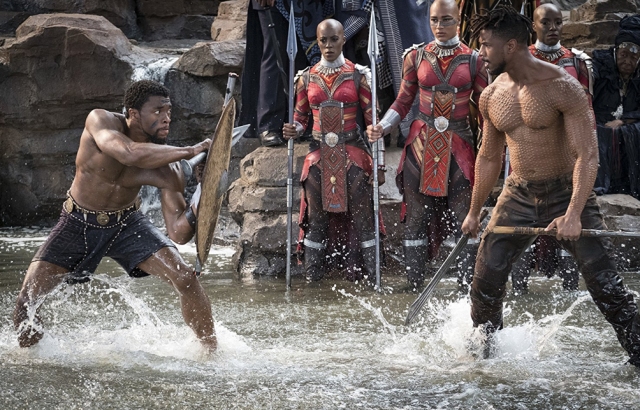 Your film can look and sound amazing, but if you don’t have the cast to back these elements up a film can be found out very quickly. Well, that’s not a problem that Black Panther has to deal with. There are some truly exceptional performances here. Chadwick Boseman takes his role as T’Challa to the next level. He is really growing into the character and making it his own. He combines perfect line delivery with real commanding performance. Boseman is well supported by Lupita Nyong’o (Nakia) and Danai Gurira (Okoye) who both are given plenty of character development in the film. Some people wondered about Danai Gurira’s inclusion in the ‘superhero charge’ in the Infinity War trailer. Now they have their answer. She is clearly one of the best, if not the best, fighters in the MCU. All the best fight sequences in this movie involve her character and thankfully we do not have long to wait before we see her back on the big screen.

The MCU usually has a villain problem in its movies, but this is not the case with Black Panther. We are treated to two great performances by Michael B. Jordan (Killmonger) and Andy Serkis (Ulysses Klaue). In Killmonger, you have a complex character with a motivation that you can understand. On the flip-side of that, Serkis delivers a Joker-esque performance of unpredictability and anarchy. Serkis never gets the recognition he deserves outside of the mo-cap suit.

Special mentions also have to go out to Winston Duke (M’Baku) for his brilliant comedic delivery and Sterling K. Brown (N’Jobu), who left a lasting impression on the film despite only brief appearances.

That’s the cast done, but what about the director? Ryan Coogler makes the step-up to a big-budget movie with relative ease, bringing both style and substance into the production process. He should be proud of the movie, on the whole, and his star continues to rise.

So. With outstanding cast performances, stunning production design and an emotive score you’d think the movie would be destined for greatness, right? Well, here’s the thing. Despite some truly epic moments, in all honesty, the film has a number of issues.

To begin with, some of the CGI in Black Panther is pretty sketchy. I’d even go out on a limb and say, at times, some elements were worse than ‘Superman’s moustache’. Some of the green-screen was really jarring and took you right out of the scene. I assumed the ropey looking character-CGI that was present in the film’s trailer would have been fixed for the final film. Nope. That was it. While you can forgive a few moments of poor looking CGI, the last act is packed full of it, and this was a real shame.

While the fight scenes involving Danai Gurira were great, some of the fight sequences were on par with Iron Fist. Some of the fight cuts were very off-putting and even the fake ‘one-shot’ didn’t really pay off. The big action sequences you expect from a Marvel movie were few and far between, and even when we did get something it was over all too quickly. The opening mini-fight sequence was also very poorly executed due to the really bad lighting.

The humour was also a bit of an issue, predominantly in the first half of the movie. While it really clicked in the second half, the main source of the misplaced comedy came from Letitia Wright (Shuri). Now I’m gutted about this because I think highly of Letitia Wright’s previous work. But I just found her character, not only unfunny but also rather annoying. Her performance did get better in the latter half of the movie so there is still some hope for her character going forward. My frustration with Shuri is also present probably down to the fact she was tied so closely to the ‘vibranium can do everything because vibranium’ aspect of the movie. Yes, you have to suspend some disbelief, but at times I was not satisfied with how vibranium could just magic a solution. It just seemed a little lazy and the film relied on it too much at times.

Now, don’t get me wrong, I REALLY enjoyed Black Panther and hope it continues to be a success.  But I have conflicted feelings over the movie. There was genuine greatness mixed with real frustration. I wanted more of one thing and less of the another. At times the film is a little unbalanced, and given the runtime, the rollercoaster of highs and lows were just a little too hard to stomach.

Despite the film’s negatives, you have to give it credit to it for daring to challenge the MCU model of filmmaking. We’ve seen with James Gunn and Taika Waititi that when a director is allowed to shape and mould a film in their vision you get a different kind of MCU movie. And with a few minor tweaks here and there, there is nothing to suggest future Black Panther films won’t be up there with the best of them. Does Black Panther make my top ten? Yes. Does it make my top five? No. But credit has got to be given to those involved with Black Panther, it creates a unique, vibrant world full of excellently crafted and enjoyable characters.

Black Panther delivers outstanding performances acting out a well thought out story in a vibrant and beautiful setting. Despite the many great things that Black Panther offers, overuse of poor CGI and some character failings cause the film a few issues. The political and cultural expressionism within the movie, however, pulls the film along to leave you feeling satisfied as the credits roll. – Wakanda forever.

One reply to “Black Panther Review”