It delivers both good and bad in equal measure. There were times I was in floods of tears, due to my unhealthy emotional connection to dinosaurs. Then there were times when I was not buying what the story was selling. So the overall experience is a difficult one to get my head around.

There was one scene in particular that cut me to my very soul, and could easily be considered one of the most emotive scenes I’ve seen in ANY movie. It was done that well. The film contains so many of these high calibre moments, but this meaty cinematic filling is sandwiched between some rotten storytelling bread. 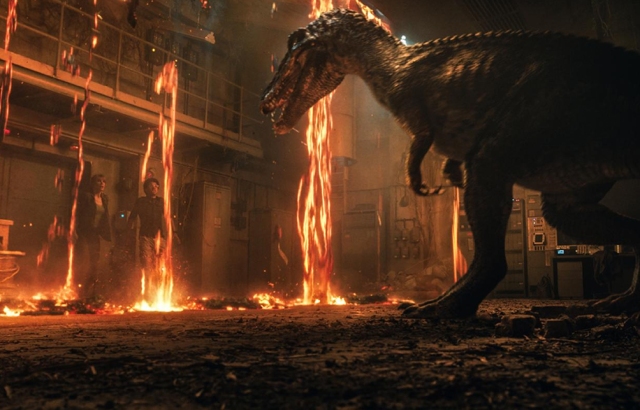 The film’s negative all stem from the script, written by Derek Connolly and Colin Trevorrow. They have obviously borrowed from previous Jurassic films, tweaked the scene and tried to reimagine the tension or wonder. But the problem is, those impacts don’t have a payoff. When not trying to piggyback on nostalgia, the script fumbles with its new concepts and either ending in predictability or is simply just left unfinished. The film’s story makes many easily avoided mistakes, and it was rather frustrating that they constantly run into them head-on.

Another problem with the movie was the humour. It was a constant misfire. That is not to say that humour should have been removed from the film, it needed it, it just needed better writing to make the jokes work. The film had some many fantastic horror moments, breaking these up with humour was needed to balance the film. But they botched it, and this was really disappointing, especially as it’s never been an issue with previous Jurassic film.

In terms of the cast, there are also some negatives. Justice Smith (Franklin Webb) was a constant source of annoyance and Daniella Pineda (Dr. Zia Rodriguez) was never really convincing. Rafe Spall is usually very good, and while he played his character well enough, the writing just made him to obvious. They stopped short of him having a top hat and twiddling a moustache. It was that on the nose.

The returning co-leads Chris Pratt (Owen Grady) and Bryce Dallas Howard (Claire Dearing) were once again very good. Their romance is played down a little and it helps their dynamic tremendously. The standout star though was Isabella Sermon (Maisie Lockwood). She was phenomenal. Her acting ability at such a young age is very impressive and she really helped to add to the drama and tension of the movie. More on her in our spoiler talk discussion.

As for Ted Levine (Ken Wheatley) and Jeff Goldblum (Dr Malcolm), they are fine. Both have slight issues but for different reasons. But overall, they were serviceable.

So, a hit and miss script and some annoying characters, the film doesn’t have much to be proud of right? Not quite.

J. A. Bayona manages to right the wrongs of the script at every other turn. A completely odd story choice that makes no sense? Bang. Bayona counters it with some brilliant cinematography or scene building. The film’s horror elements are the strongest factor. The terror was on point throughout, with homages to classic horror properties sprinkled amongst the average story. I never imagined that I would see a nod to Murnau’s Nosferatu in a Jurassic Park film. It just makes me think what would happen in Bayona was able to bring in his pal Sergio Sánchez to collaborate their own vision for a Jurassic movie.

So what about the future of the franchise?

Well, I’m a little worried. The whole concept of weaponising dinosaurs and living side-by-side with humans has never been something I’ve been excited for. But it’s very clear that from these two Jurassic World films, and especially at the conclusion of Fallen Kingdom, the next movie is going to explore in detail these concepts first-hand. And I’m not sure how I will deal with that.

Jurassic World: Fallen Kingdom is a mixed bag. For every great moment, there is a not so great moment to counter it. For every good character, there is a bad. This constant see-sawing from good to bad becomes very frustrating. The moments of horror and tension are classic Jurassic Park, but the story direction is taking the franchise into risky territory. Overall, it gave me some great moments, but some forgetful ones in equal measure.