It was a mixed bag on The Walking Dead this week. The show has returned stronger than ever this season, yet a few cracks have started to appear this week. Can the show hold itself together? Or is it destined to slip back into the ‘bad old days’? I have hope that it will continue to a rejuvenating season, but looking at the (US) ratings, the show has suffered from a hangover from previous seasons. It’s now down to Season 1 and 2 numbers, around the 4-6 million viewers mark. Given the show averaged around 12 million, with a show highlight of 17 million, this is a worrying time for the show. I’m not sure with Maggie and Rick leaving how they are going to bring back any viewers who fell away from the show. Equally, it’s going to be just as difficult to try and gain new viewers to a show that is nine seasons in! I know you didn’t come here to read about numbers, so on to the review!

We had some nice scenes from ‘Rick’s Farewell Tour’ involving Eugene and Carol. We were also treated to a reminder of what a ‘bad-ass’ Michonne is, during her ‘venting sessions’. There was also some wonderful subtle moments, such as when Michonne said ‘sons’, referring to not only to Andre, but to Carl as well. Good job! Yet despite these positives, the show did feel like it was falling back into some old habits. But more on that later!

The episode centered around two main conversations. Negan and Michonne, and Rick and Daryl. Two very different scenes, with two very different objectives. One of these duos knocked it out of the park. The other? Not so much. While it pains me to do this, I thought the Michonne and Negan subplot was a little thin. With two outstanding characters on display, you’d expect some great moments. Yet any great moment these two had was more, good or OK, rather than great or memorable. They slipped back in to some of the bad habits the show has been guilty of in the past. The slow, drawn out conversation leading to the inevitable conclusion. Yes it was setting up the next part of this arc, but it was too much of a chore to sit through at times. Both Negan and Michonne had some good moments though, so hopefully they can pull it out of the bag, but they will need to pull the trigger on this sooner rather than later. So what about Rick and Daryl?

For me, the episode highlight was the ‘pit’ scene with Rick and Daryl. Not only was this great because it was the main action sequence, but it featured some of the best written and best performed dialogue in show’s history. These two characters have come a long way since that first season. Be it on screen or off it, Andrew and Norman have great chemistry and it really shined through here. There were truth bombs dropped left and right. We had name drops, all the biggies like Carl and Glenn, this was an emotional scene that was a joy to watch. Yet it was a bitter sweet moment, as this may be the last time these two have this kind of scene on the show. Who knows? What I do know that the writing was fantastic and the tension and drama build up, as the walkers fell into the pit with them, was nail biting. Perfect execution all round.

Elsewhere, Anne and Gabriel had a a nice short sequence, but it’s a little difficult to see where this one is heading. There are too many possibilities right now, yet at the same time it is probably one of the least engaging. I think the Scavengers subplots have always been a tough slog to get through. I was starting to engage with Anne more, now that the Jadis persona was dropped. But looks like it could be tilting back in the other direction. The ‘Bucket Head zombie’ was great though, and that’s the one redeeming thing about the Scavengers, they always have some cool looking Walkers.

We also had a standoff at the camp between the main group and the dissenting Saviors. I think Carol being caught off guard was a little stupid, especially as previously she has always been clued up to these types of ambushes. I think this was a little lazy in terms of the writing. I’d also would rather be seeing Justin in this role than Jed leading the charge, but that’s just me. They cut to Jerry a few too many times for my liking. So when we cut back to the pit and hear gunshots at the camp, everything is left up in the air. My gut instinct is Jerry took a bullet. But this small scene just felt unfinished. And that was the apparent theme throughout the episode. 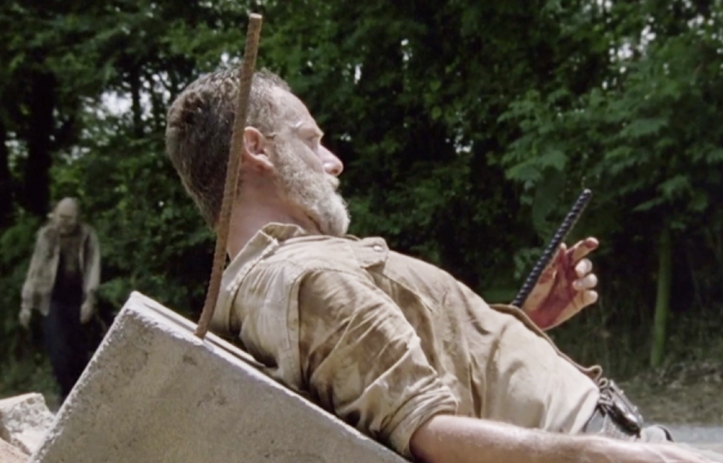 This was all about setup. We had no resolutions or endings, it was just story setup or teasing cliffhangers. The camp cliffhanger was weak, but it wasn’t a big scene so probably fits the low key feeling I have have about it. As for Rick falling from the horse amidst an encroaching horde? It was obvious, probably as obvious as how he escapes from this scenario next week. Somebody coming to the rescue, my money being on Daryl on the bike. Learn from your mistakes Walking Dead. We don’t need this Glenn-like teasing. We know Rick is leaving, you don’t need to keep pulling these ‘will he/wont he’ faux death scenarios. Again, it’s back to the bad habits. Season 9 has so far been really good in terms of it’s writing and it’s new direction under Angela Kang. But the season had a bit of a wobble with this episode. It’s time to find your footing and go again next week.

Overall, this was probably the weakest episode of the season so far, which is strange as it features one of the greatest scenes in the show’s history. But that’s the that is The Walking Dead in a nutshell, it’s a paradox. That’s not to say it was a bad episode, just not as good as it has been over the past few weeks. It also feels like Rick’s exit is coming, but if this episode is any indication on how they are going to handle it, the sooner Rick goes the better. I’d never thought I would say that about one of my favourite fictional characters. But please don’t draw it out, don’t ‘Glenn-it’. If he’s going, lets make a it a fitting exit, rather than a drawn out mess.