First of all, let me be very clear, while this film has been rated a 12a, it is definitely not a movie for young children. The Crimes of Grindelwald is not afraid to go dark, and I mean dark. In front of us, at our screening, their were three young children, one dressed up in house robes, another clutching a cute Niffler teddy. I can only imagine the conversation their parents must of had with them in the car ride home. This movie does not shy away from death, nor does it put a cut off point for the age at which it happens. So if you plan to take any young children to see this film, do so on the basis of knowing what type of themes and content they can handle.

Following on from this, the film sets the darker tone from the very beginning. This opening scene may be one of my favourite sequences in any Wizarding World movie. It was superbly executed in every single aspect. Music, tension, lighting and of course perfectly acted. There are a few other instances in this movie that features a big action piece, all with varying degrees of effectiveness. But the bookends of this movie are very good indeed in that respect. The film does have a lot more action than the previous movie, though at the same time they do feel very familiar. An apartment, a Ministry and random streets, the location beats are definitely in sync. One major standout this time around is, of course, our return to Hogwarts School of Witchcraft and Wizardry. While the nostalgia factor here was off the chart, it felt very organic within the movie. It didn’t feel like a cheap addition to simply pull on our heart strings. Though I’d be lying to say when the castle first appears and I heard ‘Hedwig’s Theme’ my eyes were not filling up with tears. The time at Hogwarts was key, in many respects, to the plot and certain characters. Seeing the younger versions of the main cast was fantastic, and as for the young actor playing Newt, he was simply magnificent.

Strong acting and character portrayals is one of the film’s strongest aspects. Eddie Redmayne continues to shine as Newt Scamander, whose personal journey in the movie was very fulfilling. Katherine Waterston takes a slight step back in terms of her involvement, but is once again a positive force. Dan Fogler once again brings the humour, while Alison Sudol as Queenie takes a giant leap forwards in terms of her character development. I was, however, surprised with how little Ezra Miller was involved, especially in comparison to the first film. But he was threaded throughout the film well enough. I fully expect his presence to increase in the next few films. Especially after the film’s ending. Along side him was newcomer Claudia Kim as Nagini, who was very underused but could be another character who will grow into the series as it progresses. I thought Callum Turner (Theseus Scamander) and Zoë Kravitz (Leta Lestrange) had the most impact on the movie in regards to the new characters. Their dynamic and interactions with Newt were particularly enjoyable.

Now, on to the big two, Dumbledore and Grindelwald. I think Jude Law was good choice for the role. While his dialogue style switched, at times, between Richard Harris and Michael Gambon, his overall performance didn’t really draw from either of them. Some will see this as a missed opportunity or an error of judgement. But personally? I enjoyed seeing a third interpretation of the character. We have to remember that this is a young Dumbledore, and someone who is very different to the man we see in The Philosopher’s Stone. It was a brave choice for them go this was with such a well established character. As for Johnny Deep as Gellert Grindelwald? Wow. What an astonishing performance. In one movie, Grindelwald has managed to put Lord Voldemort well and truly in his shadow. With every appearance he commanded the screen and created, not only a genuine sense of threat,  but also a sense of wonderment. He was such an emotionally conflicting character. Depp was on the top of his acting game here, and if he can build on this performance, we might be seeing one of the greatest movie villains of all time. 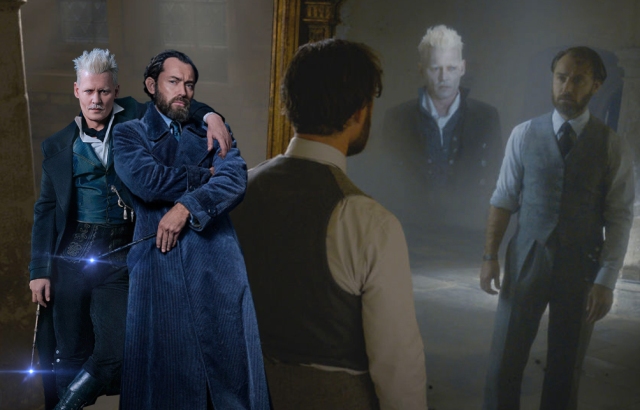 I cannot deny that I really enjoyed this movie. From the story and the characters to the set and costume designs. But if I look at it objectively, I can see how others might not have enjoyed it as much. While the things I’m about to address can be seen as negatives, for me personally, they did not stop me from enjoying the movie. So, let’s start with the big one, this film is overflowing with exposition. You are bombarded with wave after wave of information, character history and lore. I can understand how a casual fan or general cinema goer would find this very overwhelming or distracting. I think this issue stems from the fact that J.K. Rowling is simply not a screenwriter. She has stuffed a lot of information into this one film, and given that we have five films in this series, some of this could have been spread over two movies.

The pacing can also be called into question. The film does dip a little in the middle and some may complain about how confined the movie is. But how much different is that to being stuck inside one school for so many movies? And finally, for sticklers of timelines, it does get very messy with the established canon. “How can X be at Y when X wasn’t born until Z” – This happens in a few places and in different scenarios. Is this a case of the movie lore being different from the books? A new creative choice by Rowling or simply an executive going we need this cameo or scenario to fit with this particular story? For me, it’s not a big deal nor is it a weight around the film’s neck. There will always be fans who will react badly to this, I guess I’m just not one of them.

I used to review films in a very clinical and cynical way. I got to a point where I didn’t enjoy watching anything anymore. It was at that point I decided to make a big change, and start to review things from the point of how I felt at the end credits. I gave Justice League a full five stars. The comments and abuse I received was crazy. But the fact is, despite having some real garbage moments, I left the cinema feeling entertained. And that is the case here. Similarly to The Last Jedi, there seems to be some real negativity surrounding this movie, most of which is coming from the ‘fans’ of the franchise. I do think this movie is going to split opinions, and while I hope the Harry Potter fandom can rise above the Star Wars fandom, I fear things could get very nasty online. But I’m going to stick my neck on the block and praise Fantastic Beasts: The Crimes of Grindelwald as a great addition to the franchise.

While The Crimes of Grindelwald struggles at times to keep its exposition under control, it is still a highly enjoyable entry into the Wizarding World. Eddie Redmayne continues to blossom in the lead role, while Jude Law and Johnny Depp are both nicely positioned for an exciting future in this series. The film’s charm and warmth is exquisitely balanced with a much darker presence, with the light and the dark working in perfect harmony. This was definitely a second piece in a much larger puzzle, and while it can be frustrating that we are left with more questions than answers, I remain confident the payoff will be worth it.