I’m sure you are sick and tired of me saying it, but this season of The Walking Dead has been a real return to form. Or maybe it’s just been bad for so long, it just feels that way? Anyway, not only are they fixing all the frustrating issues, that the show has acquired over the past few seasons. But they have managed to bring the horror elements back to show. And this is the most important thing for me. The Walkers need to feel like a threat again. Our heroes need to be put in tense and dramatic situations. This notion was hammered home, and then some, in the final part of this episode. In the search for Eugene, Daryl, Dog, Jesus and Aaron notice a heard acting strangely. When they eventually find Eugene, he tries to warn them that the Walkers are “whispering”. That they have changed. The lead up to this moment was great throughout the episode. It was a natural journey, free from the pitfalls and failings of the previous seasons.

The final showdown saw the group trapped in a foggy graveyard with Walkers closing in on them. This is the kind of scenario I want. Give me the horror! The others try to escape while Jesus and Aaron fend off the approaching Walkers. Jesus tells Aaron to go, this set alarm bells off, but they soon went away after Jesus entered the Matrix and took down some straggling Walkers with some epic slow motion fighting. Two walkers then approached him, he killed the first one with ease, swinging for the next one who ducked… Yes, the ‘zombie’ ducked out of the way, stabbing Jesus in the back, killing him. I did not see this death coming. But the way it happened? I’ll take it. It was just out of nowhere, it was a great moment, in an odd way. As the others rushed to help, more ‘zombies’ charged at them with weapons. The Whisperers are here! When the skirmish is over, Daryl removes one of their faces to reveal a person underneath the ‘Walker mask’. Then, the whispering begins again. “They’re trapped”. Their tormentors, hidden within the fog are closing in. Man, WHAT an ending!

From the horror settings to the great fight choreography, this final act was simply brilliant. I didn’t know what was going to happen, nor did I see the death of Jesus coming. Sure, I thought he might get captured. But killed? Wow. I mean, I like Jesus, but he’s been a little stagnant for awhile. So I’m not too upset about this. He got to go out like a bad ass, he sacrificed himself in a way, it worked. I’m just glad the death wasn’t given to Aaron. As regular readers will know, he’s one of my favourite characters, probably THE favourite since Rick has left. With Jesus gone, the chance of him being better positioned on the show has just increased. As for what happens when the show returns next year?

I don’t know how they are going to use The Whisperers on screen. It will be interesting to see how much they take from the comic. I’m hoping they deviate a fair bit to some extent, as I want to be surprised, like I was with the death of Jesus. He’s still alive in the comics. I think they’ve cast Alpha and Beta perfectly. They have two very established players in Samantha Morton and Ryan Hurst. As for my prediction when we return in the new year? I can’t really see the whole group getting captured. Maybe some will escape, with a few taken hostage as a way to introduce The Whisperers from a dialogue stand point. The escapees are then able to warn the other settlements about this new threat. But if this is sounding familiar, it’s a little close to the format of All Out War. So hopefully they will do something more fresh with the story.

Away from The Whisperers, Jeffrey Dean Morgan continues to knock it out of the park with his conversational skills this season. No matter who he has interacted with, every scene has been sublime to watch. Next up to take on his silver tongue was Gabriel. These two have an obvious past, and while Gabriel has never been a character I’ve cared much for, the two of them had great chemistry here. I loved the back and forth, verbal sparring. Both gave as good as they got. The show continues to portray Negan as reformed, but deep down I still believe there is the old Negan buried deep inside. I don’t think he will revert fully to his old ways, but I think they will evolve the character into something new. Something we haven’t seen on page or on screen yet. At least that is my hope. But if we get the Negan from the comics I can get on board with that.

This great story ends with Negan realising that his cell door has not been locked. Let’s face it, Gabriel has a habit of leaving gates open! I’m not sure what he does now to be honest. I can’t see him escaping and going on a rampage. Nor can I see him returning to his cell to prove he’s changed. I’d love for him to seek out Judith, only for Michonne to return to find the two together. Can you imagine her reaction? Would she flip, showing Judith a dark side of her, pushing Judith closer to Negan? It’s an interesting thought. Whatever happens, I’m glad that Negan is out and hopefully can be more actively involved in the story. With The Whisperers now in play, Alexandria is going to need all the help they can get. 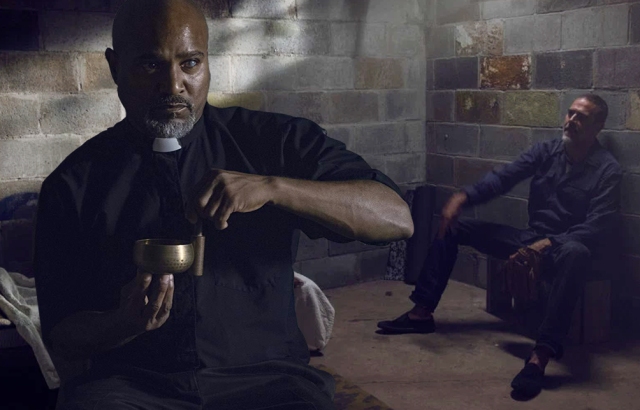 Speaking of Michonne, she continues to be a frustrating character to follow. For all the positives this season, she is the only real negative. We get to see a glimmer of her old self, during her conversation with Carol. But the wall she has put up is not coming down anytime soon. I’m eager to find out what event or events transpired to make these characters act this way. Everyone is guarded, weary of each other. They’ve closed off their communities, unwilling to offer help to one and other. Hopefully we will get some answers in the second half of the season.

With Jesus now dead, you’d imagine rule of Hilltop going to Tara? Or will someone else think they stand a better chance of winning, going up against Tara rather than the previously ‘unopposed’ Jesus. Personally, I hope they don’t go down this route. We’ve had the Maggie/Gregory power struggle already. We don’t need a repeat of that. If Tara does takeover Hilltop, will they go more hard line in terms of refusing to offer help or aid? Tara, in comparison to Jesus, has always been a more negative in that regards, so it will be interesting to see where this story goes.

Henry has arrived at Hilltop, he finds out that his crush, Enid, has hooked with Alden. He also makes some ‘friends’ with the other Hilltop teens. The teens have a trapped Walker who they like to mess around with, Henry jumps into the pit, mercy killing it. He’s taken to the cells, but does not grass up his newly acquired friends. As you can tell, I have little interest in this particular story line. I’m not about the whole ‘cool kids leading the new kid astray’ subplot. Save it for your high school dramas.

This was probably one of the best episodes this season, from start to finish. The one thing to take from this season so far, is that the horror elements are well and truly back. That final scene in the graveyard was terrifying. It was tense and scary, it’s what the show has not been for a long time. It was the perfect cliffhanger, and I cannot wait for the show to return in February.