Want to get a glimpse of what is to come? Check out the video below. If not, scroll past onto our thoughts and predictions!

So, let’s get straight to it!

Below contains our theories and predictions for the Season 9 finale. But first things first, let’s hear more about the that shocking ending to Episode 14. 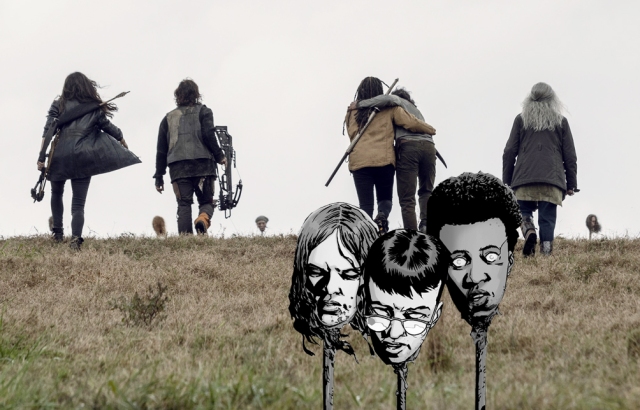 Robert: It’s hard to actually put into words what we’ve just seen. The Walking Dead has been utterly brutal in the past but this surpassed my expectations and took it to Game of Thrones levels. Not only were the heads on the spikes visually haunting but seeing that those people still weren’t completely dead emphasised the demonic actions which had taken place.

Ben: I think I said similar in the episode review. But I’ve been banging the drum on this all season. Season 9 has been quality, weekly television. And this second half has been so consistent in terms of the story, performances and pacing. I was not surprised to see them deviate from the comics, by having Tara and Henry on the spikes instead of Rosita and Ezekiel.  But I was still shocked that they went with Henry.

Robert: I was very surprised to see that Henry was one of the victims as just like you. I assumed he would take on many of Carl’s stories. However, it makes perfect sense that Alpha would make a point of getting him. He’s the reason she’s lost her daughter. We’ve had some fantastic villains on the show but Alpha is truly terrifying. I was really shocked to see her shed tears over Lydia though.

How Will The Likes Of Carol/Ezekiel/Hilltop Cope With Their loss?

Robert: Well for me, the most upsetting part was Carol’s reaction. Carol is my (joint) favourite character. Since the time jump we’ve seen her kind of leave all the horrible things that have happened to her in past. She’s set up a new life where she’s found love with Ezekiel and Henry has given her the role of a Mother again. I think we are going to see full on “look at the flowers” Carol again.

Ben: Oh for sure. This will definitely change her. I don’t expect her to fully revert to a previous persona, I feel they will evolve the one she has now. But just give it a more ruthless edge. More cold. Like we saw when she torched the Saviors at the start of the season. What about Hilltop? How do you think they will cope losing yet another leader?

Robert: Hilltop will probably feel the repercussions more than any of the groups as Tara was their leader. The only person I can see taking on that role now is Alden.

Ben: Alden is a good shout. I’ve liked him since his introduction. But with my fanboy hat on, I’m all about #TeamKal

Robert: Daryl has really been pushed to the forefront and I think people will now look to him for guidance.

What Do You Think Will Happen In The Season 9 Finale?

Ben: We know it’s going to be set against a snow storm. It’s going to be a cold, harsh episode. I hope we see another cool type of zombie. They always knock it out of the park with their ‘zombie of the week’ types. Similar to the underwater zombies, I think we’ll see a snow submerged zombie make a big impact.

Robert: I can’t call it. A new war is obviously on the horizon as they aren’t going to sit back and let Alpha get away with this. The trailer showed Carol saying how they hadn’t agreed to her terms of land restrictions and that tells me she’s gunning for her, almost spearheading the mission.

Ben: I think Carol versus Alpha and Daryl versus Beta is what we are building towards next season. So I think you’re right there. I hope they do something with Negan though.

Ben: Obviously Negan and Alpha is very much a thing in the comics and their story is brilliant. So it will be interesting to see how much of that they use, because if they follow what i just said, Negan doesn’t really have any one to feud with.

Who Do You Think Will Die?

Robert: I’m not sure that anyone will die seeing as they have had huge cast departures this season. Even though the show has gone from strength to strength I still miss the presence of Maggie, Rick and Jesus. Let’s not forget we have Michonne leaving next season too!  If there are deaths I would think it will be secondary characters that won’t have as much of an impact.

Ben: See, I think you’re right. In my head I think the main cast will get through untouched, with maybe a secondary character or two to fall. But there’s a little bit inside of me that thinks we could see Ezekiel go. I don’t know why. I just have a feeling the show might have one final big casualty.

How Will The Episode End/Will There Be A Cliffhanger?

Robert: I think there will be a big cliffhanger involving Alpha. This might be that Carol, Daryl and the rest come face to face with her again or that Negan finds his way to The Whisperers.

Ben: I think teasing a ‘free’ Negan would be a very exciting way to end it. However I have a hunch it be tied into Eugene and the radio. I think they will pull straight from the comics and Eugene will get the radio working and make contact with a new group. I think they will set up The Commonwealth. Maybe not to come in straight away in Season 10, but maybe midway, especially with Michonne leaving. I think the show is going to have a big shakeup.

What do you think will happen in the Season 9 finale? Leave your thoughts, predictions and heroines in the comments below.

One reply to “The Walking Dead: Season 9 Finale Predictions”