Season 9 of The Walking Dead continues to deliver. I’ve started A LOT of my reviews, this season, claiming the episode was “top 10” or “one of the best ever”. You are gonna kill me, but I will have to state this yet again. ‘The Calm Before‘ was majestically crafted with a breathtaking narrative, perfectly executed storytelling and outstanding performances from the cast. This was an astonishing piece of television. It would also take a lot of its scenes from the comics, but even then, I could not prepare myself fully for what was about to happen.

This episode manages to cram a lot in, and there was a risk of some parts being rushed or mishandled. But that wasn’t to be the case. I’ve stated previously that the cast is too bloated, and it is. But this was a rare instance where they managed to give everyone enough screen time, without it becoming a jumbled mess. I’m not sure they can always achieve this, on a week-by-week basis. But here at least everything worked in perfect harmony.

The episode begins with Alpha scalping Hilde, as she and her husband were en-route to the Kingdom. The significance of this scene would later bear fruit when Alpha manages to infiltrate The Kingdom. But more on that later.

With the fair in full swing, all of the show’s characters are reunited. The most touching of all was Judith’s interaction with Carol. I’ll be honest, I nearly went. You just think of everything these two have been through, with Judith not fully knowing most of it. Carol has been protecting her since birth. It was such a satisfying payoff.

The leaders of the communities meet up to discuss what to do with Lydia. Tara is the only one unwilling to get on board. She doesn’t trust her. But then Michonne throws back to Rick spotting her at the prison. The same goes for Oceanside, and how they could have killed Tara on the spot. There needs to be trust if they are to survive. Tara comes around, with Ezekiel pulling out his charter and the document is signed by all. Again, a great payoff here, not only for the leaders uniting and the charter, but the throwbacks to previous seasons. The episode was getting everything right. But the feel-good factor of the fair was not to last.

In the next scene, we hear a familiar, chilling theme and notice some familiar clothes (and hair). Alpha is inside the kingdom wearing, literally, everything Hilde owned! Seeing her acting so casual among the other survivors was chilling. What was more frightening was when she bumped into Ezekiel. What a creepy conversation. I had major comic flashbacks at this point, and I did wonder if something big and iconic was on the horizon. 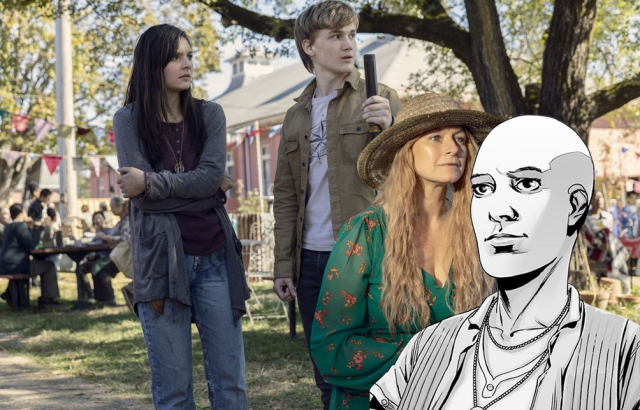 I’ve given Henry a hard time over the years, so I initially thought the scenes with the teens and Lydia was going to be a drag on the episode. But it was short, and it achieved its purpose. So I was very pleasantly surprised. When they manage to get this stuff right, you know the episode is on to a winner.

As Daryl and others head off to Hilltop they encounter the done over cart from earlier. The group splits off and soon, Daryl, Michonne and Carol are surrounded by walkers. After fighting them off, the Whisperers surround them. Beta’s imposing presence is once again felt on the episode. But he wasn’t to be outdone here, with Alpha joining in on the fun. I really didn’t want a hostage sub-plot here, so was pleased when she announced that they would be allowed to leave. But first, she wanted to get her message across nice and clear. She takes Daryl to the top of a hill and we see a huge walker herd. She says if they ever cross into their territory again, she will send the heard their way. Alpha has been great all season. They have really built her into such a menacing figure in a short space of time. I hope that they manage to keep her around as the main antagonist for the long-run and not a short-term obstacle like the Governor or Negan. 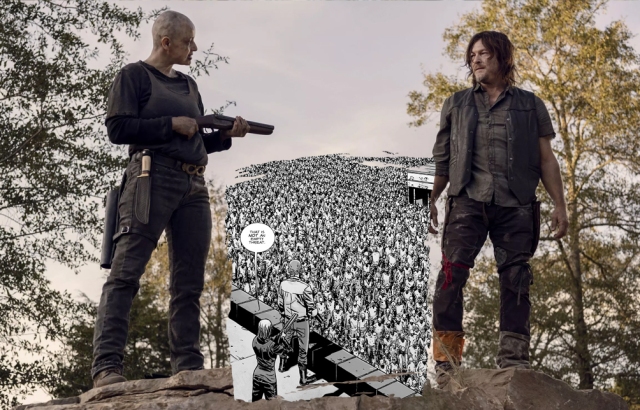 So, let’s talk about THAT ending.

The victims were DJ, Frankie, Tammy, Addy, Rodney, Ozzy, Alek, Enid, Tara and Henry. Let’s be honest, only three of these really matter. OK, to lose the Highwaymen is a little sad, but they have only just been introduced to the show. So in the grand scheme of things its not that big of a loss. Obviously, the most noticeable losses were Enid, Tara and Henry. The last three were the ones that really made this scene have meaning. Tara has been around since Season 4, so that’s a big character gone. Enid has been around since Season 5, and I feared that something might happen to her after they finally focused on her relationship with Alden. Henry has divided some fans but has been a key part of the Whisperers storyline this season.

This was a potentially tricky scenario to get right, but to their credit, they absolutely smashed it. It was incredible. I don’t think there was a more effective way to pull off what they did here. The cutaways, to people connected to each character who died, were really well done. The music was so intense and upsetting, the visuals were outright shocking. Both of these factors lead to an incredibly emotional scene. It was a standout moment in the show’s history. The bit that really got me was the small scene between Daryl and Carol. You knew it was Henry, but they didn’t show it, initially. Instead, the focus was shifted onto two characters who would have greater emotional impact with the wider audience. Seeing Daryl trying to protect a distraught Carol just gives this scene that extra edge. Because let’s face it, Henry being killed, for some, might be greeted with cheers or jokes. But when you add two of the show’s most loved characters, in this highly emotional moment, it just keeps everything grounded and in the moment.

It wasn’t until after I finished watching the episode that I thought back to the comic and the differences of this iconic scene. Tammy aside, the people on the spikes were different. No Rosita, no Ezikiel. Had these two been there at the end, it would probably have surpassed the Negan ‘Lucille’ scene. But with only Enid, a secondary character for the last few seasons, and Henry only being relevant this season, you only feel like we’ve lost one big character, Tara. This by no means diminishes the power of this scene, far from it, but it could have been so much bigger.

Just when you thought they had reached their grand finale, the episode had one final gift to give. Take a bow Siddiq. What an incredible and beautiful speech.

He was left alive to tell his story. To warn others about what happens if you cross the Whisperers. But instead, he tells a positive story. One of sacrifice and never giving up. A story of heroes. I loved this scene. The beautiful words on top of the visuals of the fallen, making their last stand, was so powerful. They managed to create two incredible scenes back to back. Both just as powerful, both just as emotional. We needed to see them going out like that, rather than just ‘dying off-screen’. Tara especially deserved this at the very least. It was a perfect ending to a perfect episode.

Next week it’s the finale. And I have no idea what is going to happen. This was ‘The Calm Before“, next week it is “The Storm“. With the snow falling at the end, everything is set up for a chilling finale. As to what happens? I’m none the wiser.

They have been threatened with a heard if they seek to further provoke the Whisperers. And I can see them doing just that. But whatever happens, the is no questioning that this season of The Walking Dead has been a return to form and one of the strongest seasons to date. I really don’t want this season to end.

‘The Calm Before‘ could go down in history as one of the greatest ever episodes of The Walking Dead. From start to finish, this episode was perfection personified. Stunning character performances, perfect story execution and an exciting and emotional narrative. The Walking Dead continues to go from strength-to-strength and that bodes well for next week’s finale.