This wasn’t your average mid-season finale, at least in terms of what we’ve come to expect from The Walking Dead. In truth, it was a pretty reserved affair, and while some will see this as a negative, as they wanted something epic and a ‘game-changing’ cliffhanger, I myself thought it did a great job with the human drama side of things. The ‘cliffhanger’ in this episode was tame in comparison to ones we’ve had previously, but I still think it was an exciting end to the first half of the season. Season 10 has been outstanding week-to-week, with Angela Kang returning the show to its former glory after a few years of going around in circles with no sense of direction. With that said, I do have some concerns in terms of the cast in regards to the actors leaving the show. But I’m going to only touch upon this slightly here, as I want to save my concerns for the Mid-Season Review with Rob later on in the week! (See be sure to keep an eye on our Twitter for when that article lands!). Anyway, on to the review!

Siddiq’s death, last week, brought up a whole host of questions about Dante. For example, if he was a Whisperer, why didn’t Lydia know him? Well, we got the answer right out of the gate! We started with a flashback, which included Alpha narrating the visuals, showing how Dante was used as a mole and his journey towards being integrated within Alexandria. As for why Lydia doesn’t recognise him? He joined after she left. This was all very convenient storytelling, but I don’t mind it. It worked, it made sense, you can’t really argue with it. Cutting back to moments after Dante killed Siddiq, Rosita and the baby walk in, but unlike his remorse with Siddiq, he’s more sinister with her. Rosita manages to fend him off, after a brutal fight. Meanwhile, a zombified Siddiq walks towards the baby, who is crying in the bathtub. The cuts between the two scenes were executed perfectly. With Dante out cold, Rosita is forced to kill Walker Siddiq, in order to protect the baby. This was heartbreaking for her. I’ve given the ‘Rosita love-square’ thing a lot of grief this season, but here it was done well. The tension and the drama were so strong throughout this opening, it’s what I love about the show. These moments of betrayal and impending threat, it was very old-school Walking Dead. 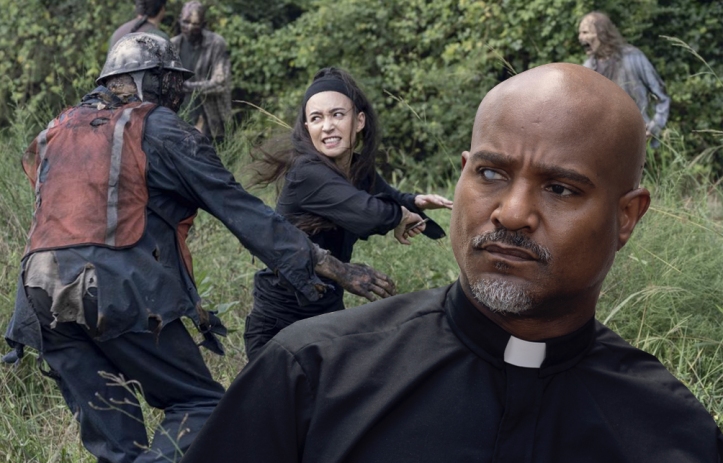 So, Dante is captured and is now facing the wrath of Daryl, Carol and Gabriel. I loved this scene. Dante was so good, he was like a different character, but at the same time he retained that familiarity of his other persona, the one most of us fell for. We get a nice little throwback in the next scene, as Gabriel is looking through Dante’s video of his arrival. I really liked that idea of asking newcomers all the questions, it was a smart plan. Dante talks about how his son was killed and the whole scene was really powerful and believable. You can see why they took him in. Rosita, still struggling to come to terms with what has happened, gets a dismissive response for Gabriel. She’s clearly struggling and he simply suggests that the feelings will pass as he continues to focus on the video. This was strange to me, but it all made sense soon after when Gabriel went to visit Dante in the cell. Given how passive Gabriel has been for a while, I honestly did not expect what was about to happen. Gabriel stabs Dante, and despite Dante attempting to fight back, Gaberial goes feral, brutally stabbing him multiple times. Over Dante’s bloodied, and very much dead body, he lets out an animalistic scream. Wow. This was great! He’s been bottling up the events in the show for years, this was a pure release of emotion. Yet again, another intense human drama scene. Keep them coming!

Elsewhere, Michonne is still on her way to Oceanside. They stop off at a library to get some books, makes sense, Judith needs education after all! When people walk into an ‘abandoned building’ on this show, you know what happens next. Walker attack! Luke is grabbed by two walkers but is saved by a mysterious man who does not stick around to accept Luke’s thanks. Once they reach Oceanside, the same mystery man is brought in as a prisoner, he was trying to steal a boat from their dock. Having just found out about Siddiq, Michonne is on high alert. She dismisses Luke’s appeal, that he can’t be a Whisperer, by saying that they don’t know what Whisperers look like anymore. She has a point! After a brief walker attack, and more slow-mo walker slicing from Michonne, we find out that the man is called Virgil and he is trying to get back to his family. He lives on Bloodworth Island, on an old naval base. He says they are well protected and can offer assistance with their Whisperer problem. Michonne eventually agrees to go with him to check out his story.  It will be interesting to see if Bloodworth is a stand-alone community or is part of the three in the Commonwealth. This might be a way to once again ease the viewers into the idea of the Commonwealth. 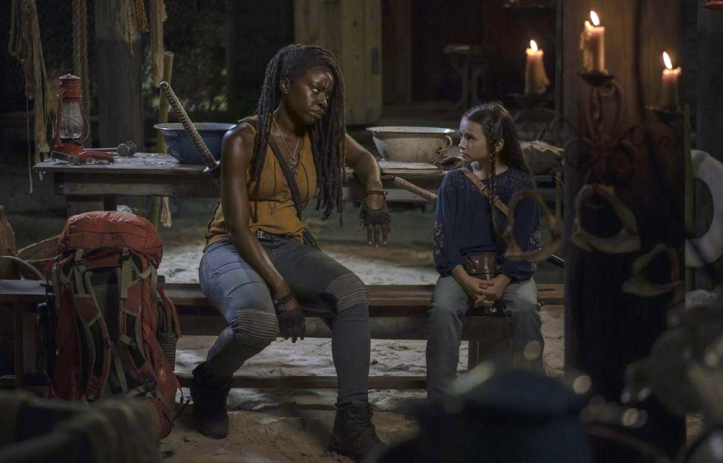 I liked Virgil. He seems an honest guy and I believe his story. He reminds me of Pete from The Walking Dead: Michonne, he was a captain of a ship, so the idea of Michonne back on the sea is a nice little visual. As this part of her story has never been brought up on TV though, unless she references being on a boat previously, it’s not that much of an Easter egg, more a half nod to those who played the video game. When the show returns, I hope we get to see Michonne’s exploits on Bloodworth and see if there are any breadcrumbs for her to follow Rick into the planned movies. We know we are losing Michonne this season, but we also know that she is heading to the big screen. With the feeling that all the shows, including the new spin-off, are gearing up and pointing towards the Commonwealth storyline, this would be a great opportunity to start peppering us with information and pre-establishing that world.

So that’s two of the three storylines done so far in this episode. What about the third? Well, a bunch of survivors head out to try and find Alpha’s herd. Gamma tells Aaron that it is in a clearing just outside the national forest. Once they arrive, the clearing is empty. Daryl feels vindicated, he never believed that their Whisperer ‘ally’ would be reliable. Though Aaron still believes that Gamma was telling the truth. And so do I. I think that Alpha knows Gamma is weak and used her to get close to Aaron to not only set a trap for Alexandria, but also for Gamma. It might not be a full deception, more of a test, by seeing if she passes that information on. While Daryl might hold some disdain towards Aaron right now, it’s nothing compared to what he’s feeling towards Carol. He doesn’t believe her that Lydia just ran off, and you can tell that he knows Carol is lying to him. He says that Carol “never came off that boat” and that it’s like “talking to a ghost”. This scene was perfect. They’ve had some outstanding scenes between each other all season, but this was the best so far. They always deliver the goods. As they switch their attention to finding Lydia, Carol spots Alpha in the distance. Carol gives chase and the rest follow. Carol is being very reckless, even by her standards this season! They end up in a dark cave, surrounded by walkers. Well, guess they’ve found Alpha’s herd! As the camera zooms out, they are trapped against a wall with thousands of walkers reaching out for them. Cut to black… 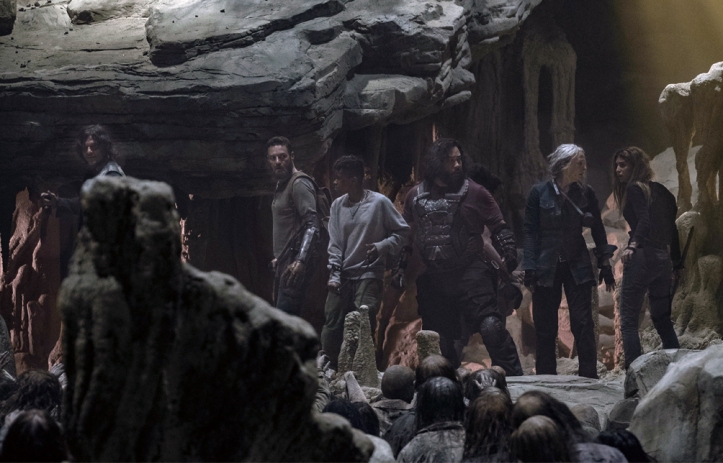 While it might not have been an ‘epic cliffhanger’, the show knocked it out of the park with the human drama elements throughout the entire episode. It didn’t need to be this massive event to keep us ticking over until the show’s return in 2020. It was a perfectly fine ending to another solid episode of an outstanding season so far. Let’s embrace all the positives that Season 10 has given us, and not on an ending that could have been ‘more’. Again, like I’ve said, it was fine for me. You don’t always need to have this huge final moment. It puts a bunch of primary and secondary characters in a threating scenario and highlights that the Whisperers storyline is going to be concluded by the time the series finale. We’ve got a herd of walkers that are ready to be unleashed, our heroes are trapped and others, I.E. Michonne, have been removed from the chessboard. They are vulnerable, they are weak and it is now time for the Whisperers to make their move. It all works for me!

So overall, another enjoyable episode! Lots of great human drama, scenes of genuine threat and peril and wonderful character interactions and development. In recent years, when the show takes it’s a mid-season break, it’s felt like a relief. But with the show as good as it is right now, I don’t want it to go away!

Rob and I are going to break down the season so far and look at what we think we happen when the show returns next year! So keep your eyes peeled for our Spoiler-Talk half-way point review coming later on this week!

What did you make of the Season 10 mid-season finale? Let us know in the comments!