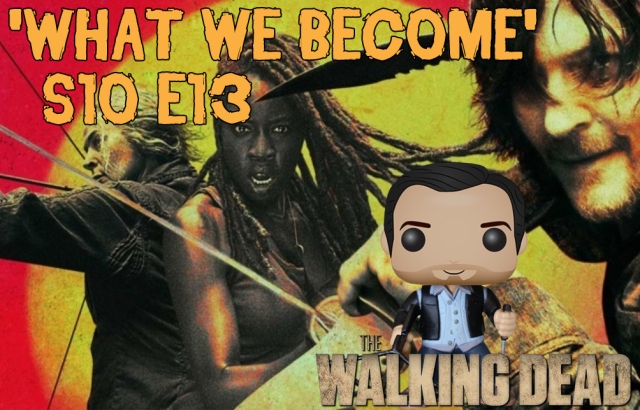 Our leader, Ben, has handed over the reins to me this week for The Walking Dead and selfishly, I couldn’t have asked for a better episode to review. The time has come for us to say goodbye to Michonne. At a time where it can feel like there are more new characters than well established ones, it’s very sad to say goodbye to another fan favourite. However, the way she leaves the show is perfection and the episode as a whole is just fantastic.

Arriving at Virgil’s mysterious island she helps him free his family who are now walkers hanging from the ceiling in a locked room. Their entry into the building gives us one last reminder of just how awesome Michonne is as she fights off a hoard of zombies practically without breaking a sweat. After they are buried, Michonne clearly feels like she’s kept her part of the deal and pushes for Virgil to get the weapons. She comes across not only emotionless about burying a whole family, but also impatient and unsympathetic towards his loss. Does this make her a bad person, or does it just once again highlight the world they are living in now?

From the get go, Michonne is suspicious of Virgil and after agreeing to stay the night she finds herself locked inside a room by him, unable to leave. She realises that he’s also trapped 3 other people next door to her and learns that this is a result from his guilt of causing his families deaths. Just to make things even worse he drugs Michonne’s food which takes her on a trippy journey to an alternate reality of her past, starting with a vision of Siddiq who blames her for his death as well as the deaths of Rick and Carl. Going way back to the beginning, choosing to leave Andrea to die and not being helped by Daryl causes her to be found by Negan and The Saviors and become his right hand woman. She sees herself kill Glenn and be responsible for that horrific opening episode of season 7. This scene translates fantastically well as we see Michonne taunt Rick, Maggie, Sasha and the others with Lucille. Her drug fuelled visions end with her being caught by Daryl and eventually killed by Rick.

I found these scenes brilliant. Although none of the old cast returned to film anything new (apart from Siddiq) the throw backs were total fan service and seeing so many old faces reminds you of Michonne’s journey and what an integral character she’s been for the overall story of the series to date. Also, I loved Andrea so much and now I’m left having to recover from her demise all over again.

After breaking free Michonne makes a huge discovery. Mixed in with junk in Virgil’s stock room she finds a pair of Rick’s boots, which leads her to find a mobile phone with his name on and a doodle of her and Judith. How flipping exciting!!!! After a conversation with Judith over her radio she decides that she needs to go looking for him. If there’s a chance Rick is alive, they all need him. This was very touching and for me, cemented what a scene-stealer Cailey Fleming is as Judith!

That discovery and that conversation is what truly makes Michonne’s exit perfect. It’s like getting closure, nothing is left unfinished and she’s off in search of Rick, just as she should be. Danai’s presence will be hugely missed from The Walking Dead but I’m glad we had this episode where she got to show off what an incredible actress she is and how important she’s been to the show. I hope we get to see her again in the future but for the time being I feel satisfied.

Are going to miss Michonne? What did you make of THAT ending? Let us know your thoughts in the comments!