The aftermath of Alpha’s beheading is quite eventful. We get a quick flashback to Carol asking Negan to do her a favour and promises to help him integrate into society once he gets rid of Alpha. She’s not pleased that it took him so long to get the job done and in reality she’s not so quick to keep her end of the bargain. After placing Alpha’s head on a spike she tells him she isn’t intending to return home anytime soon. Carol continues her journey of self sabotage, quite literally, after demanding to be left alone. On her travels she’s haunted and taunted by the image of Alpha. This is obviously the physical representation of the voices in her head and she gives herself a battering. Her guilt combined with the ramifications of her past appear to be relentless in eating away at her and it’s almost like she won’t be happy until she causes herself to be alienated completely or significantly harmed.

Melissa McBride once again slays during this episode. Hearing her famous words ‘just look at the flowers’ said back to her was a reminder of the actions she prepared to take for the greater good. It also put a smile on my face. 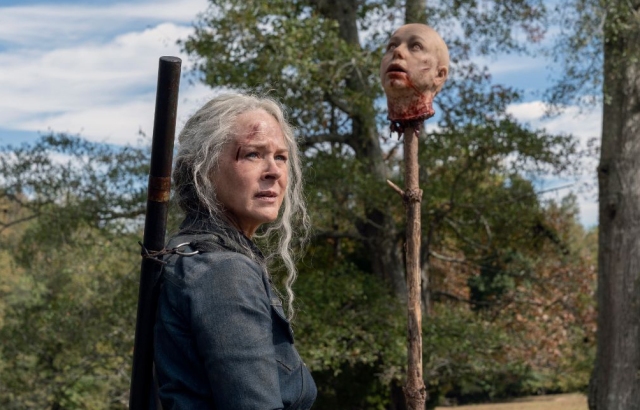 Beta doesn’t react well at all to being told he has landed the spot as top dog. He takes Alpha’s head, almost cradling it like a baby and finds himself at an abandoned hotel. Alpha may be gone but I feel like Beta has always posed a stronger threat. He’s all levels of crazy and could practically be used as a weapon of mass destruction. He just seems untouchable. Even more so now as he appears to have gathered a whole new army.

Negan eventually finds Daryl and attempts to prove his innocence. I’m so torn when it comes to Negan. I actually feel sorry for him but then I think back to what he’s done in the past and want to slap myself. However, everyone deserves a second chance don’t they? He definitely feels that he’s redeemed himself and Negan’s arc has to be one of the biggest attractions of the show. In trying to show Daryl Alpha’s head as proof, they come across a group of Whisperers who bend their knee and welcome Negan as their new Alpha. Power must be like a drug to him and surely there was a moment where he was willing to off Daryl in order to regain status.

Eugene begins his travels to finally meet Stephanie and takes Yumiko and Ezekiel along for the ride. I enjoyed this side plot for a few reasons. It kind of showed that he’s still the same Eugene we all loved but he’s come a long way. He’s still got that awkward humour but there’s also a leader within him. I thought it also gave Yumiko a chance to shine in her own right and establish herself within the group more. I don’t think we ever get to really see much from her. Lastly, it gave us a bigger insight into just how sick Ezekiel is. After fighting off 3 walkers, a task he would normally breeze through, he’s exhausted and there’s even a moment where it looks like he can’t finish the job. Things aren’t look good for him at all.

As they find their way into a new city things are very strange. Walkers have been dressed up and left almost as tourist attractions. At least it briefly cheered Ezekiel up! They eventually come face to face with a girl who screams ‘OH MY GOD, Hi!’ at them and I really can’t work out if they should feel welcomed or terrified.

What did you make of the latest episode of The Walking Dead? Let us know your thoughts in the comments!