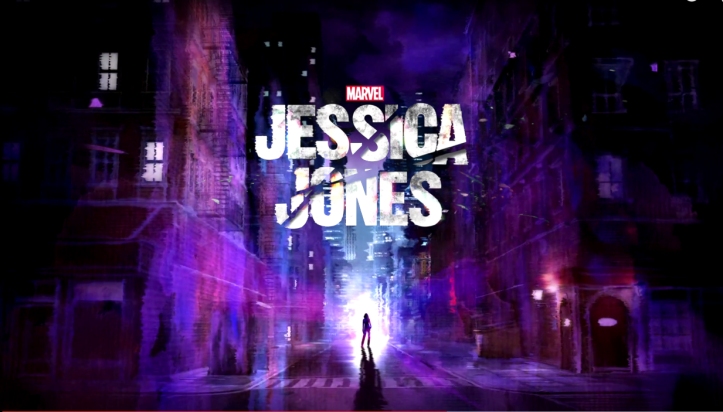 Warning: While 99% of this review is spoiler free, it does contain 1-2 minor backstory snippets. The one main spoiler is in the middle section and has a warning before it. You can skip the italic paragraph if you have yet to watch the series.

After the phenomenal fan and critical success of Daredevil, Marvel and Netflix were keen to push out the next superhero in their Defenders mini-verse.

Enter Jessica Jones (Krysten Ritter), a failed superhero turned private investigator with a taste for the drink at any given time of the day.

Despite having superhuman strength, Jessica is struggling with post-traumatic stress disorder and takes cases just to be able to pay her rent and keep her in the drink. While she is very good at the job she does, she loathes the work and this makes for an interesting concept during the first few episodes. 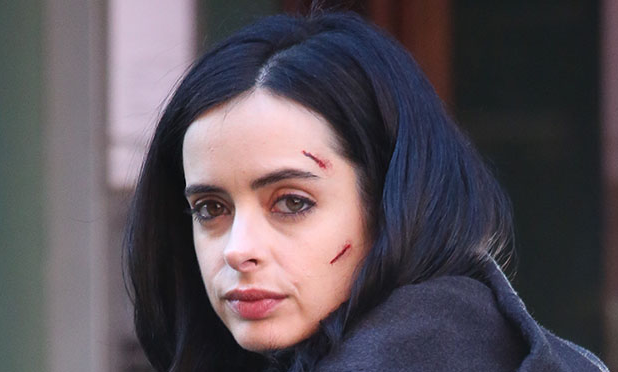 The reason for her PTSD was caused by the show’s villain, in the comics, he was mostly referred to as “The Purple Man” (And was actually purple), in Jessica Jones his name is simply Kilgrave (David Tennant).
Kilgrave has the ability to control people through the power of speech and suggestion, and it was these powers that kept Jessica under his control until she was able to escape from him. During her time under Kilgrave’s influence, he made Jessica do some terrible things. She killed for him and was a pawn in his objectives, but at the same time Kilgrave has fallen in his version of love with Jessica, but after she breaks free Jessica does not see it as love, she views it as rape. 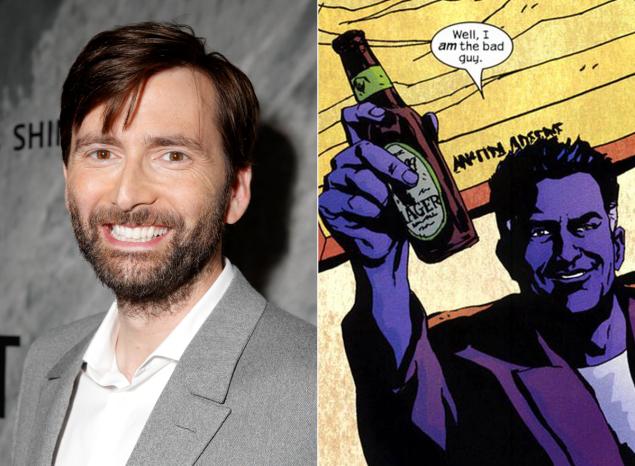 The supporting cast features a range of characters, including the next in line to get his own series, Luke Cage (Mike Colter). Cage has unbreakable skin and superhuman strength and acts as Jessica’s sex interest. Having Cage flitted throughout the series helps to reduce the need to tell as much character backstory when his own show comes out next year.

Jessica only has one person she trusts, her childhood best friend Trish (Rachael Taylor) who is a successful radio host and former child starlet who was abused by her mother. Trish gains a mid-series love interest in Sgt Will Simpson (Wil Traval) who wants to hunt down and kill Kilgrave after he uses his powers on him.
The couple’s relationship seemed forced and goes from Simpson being controlled and sent to kill Trish, to only one episode later being in bed together. There didn’t feel like a natural progression to their romance so the whole thing felt very rushed.

While Jessica answers to nobody but herself, she does have to answer to powerful attorney Jeri Hogarth (Carrie-Anne Moss) if she wants to get paid! Hogarth uses Jessica’s expertise to her own ends and even uses Jessica to flex her muscles on Hogarth ex-wife to rush through their divorce. 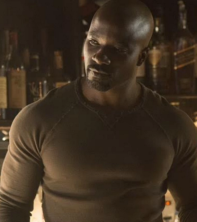 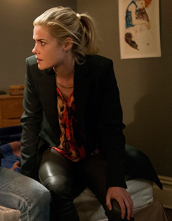 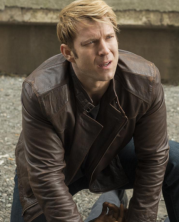 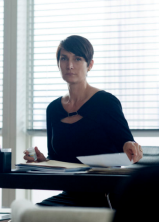 The showrunner for Jessica Jones is Melissa Rosenberg, she has previously written the Twilight film adaptions as well as working on shows such as Dexter and The OC.
Jessica Jones was not her first comic book project, back in 2002 she worked as a writer and producer on the short-lived Birds Of Prey. The show was based on the DC comics series of the same name, which featured an all-female cast of superheroes.
Rosenberg did a fantastic job producing strong female characters in Jessica Jones, as both Ritter and Moss deliver engaging performances with well-written dialogue and story direction (for the most part).

The character of Jessica Jones was written like few female superheroes before her, she was flawed and broken but at the same time, she was strong and resourceful. Like Daredevil before it, Jessica Jones is rated 15 and for good reason. Jessica does not hold back on her language or her libido, and with a literally bed breaking scene the show earns its rating well.

It’s safe to say Jessica Jones has been the most feminist superhero we’ve had brought to our screens, and while it would be wrong for all future female superheroes to be a carbon copy, it does allow for a dynamic shift in how female superheroes are portrayed in the mainstream media.

What about nods to the Marvel Cinematic Universe? Just like in Daredevil there is a reference to “the incident” and comments about “The big green guy or the flag-waver” but that’s about it. And that should be it, I know some people want more referencing and name-dropping, but that is one of the issues I took with Agents Of S.H.I.E.L.D, it happened week after week….WE GET IT! YOU’RE IN THE SAME UNIVERSE AS THE BIG MARVEL MOVIES!
Netflix has a good thing going with their own take on their Marvel characters and hope they continue to keep the plugs to a minimum.

Returning cast? Rosario Dawson reprises her role from Daredevil as Claire Temple and has a small role at the end of the series. Rosario is set to feature in the same capacity in each of the solo series as well as hopefully The Defenders. Daredevil showrunner Steven S. DeKnight confirmed he wanted Temple to originally be Linda Carter aka Night Nurse, but given her ties to Doctor Strange could Marvel be holding back the character rights for the upcoming film?  If not, it would be good to see Temple take on the Night Nurse role ready for The Defenders series. Royce Johnson also briefly reprises his Daredevil role as Sgt Brett Mahoney. 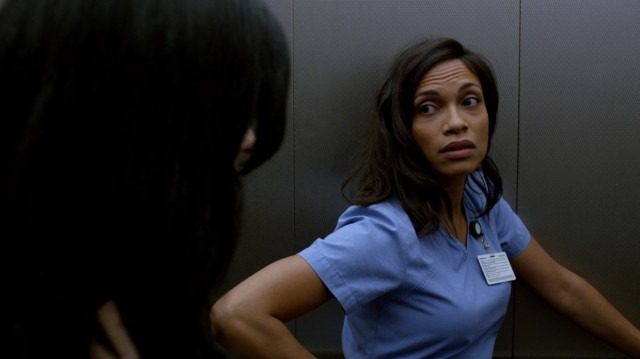 Anything the show gets wrong? While I have been positive on the whole, and there are lots of positives, there are many things the show gets wrong.
While the cast of Jessica Jones does a good job with the material on hand, the story does lose its way a little and becomes very disjointed and messy. The show started strong and you had a very likeable anti-hero in Jessica, but by the end of the series, she is a little less likeable, which is a shame.  The character shifted too many gears and became the opposite of what made her enjoyable and someone you could attach yourself to, a prime example of talented acting let down by poor writing and creative direction.

The next paragraph contains a spoiler. So if you haven’t watched the show yet, feel free to skip it.

It’s not just Jessica who gets lost in the writing, Sgt Sampson goes from key team member to a super-solider drugged up psycho in the space of an episode. This change just felt really off the pace and hindered the show progressing with a better flow. It was like they needed to crowbar in some more fight scenes for the sake of it, thus having to create another threat to face.
Will Simpson is based on Frank Simpson, aka Nuke – a super soldier who goes on to become a villain in the Daredevil franchise and his strength/moods are controlled by pills (like in the show). While I get the nod to the comic book character they seemed to drop the ball on his ‘bad guy’ origin story. Whether it is in Jessica Jones or Daredevil, I fully expect Simpson/Nuke to re-appear….with added face flag tattoo!

While the fight scenes were minimal, they were also poorly executed and felt very cartoonish, and this made them stand out for all the wrong reasons in what was supposed to be a dark neo-noir series.
Early hints at Jessica’s powers were also executed badly, the “power jumps” looked like something from a student film, the whole bend your knees then cut to a high vantage point was a strange choice, to say the least. 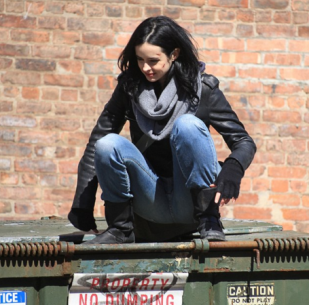 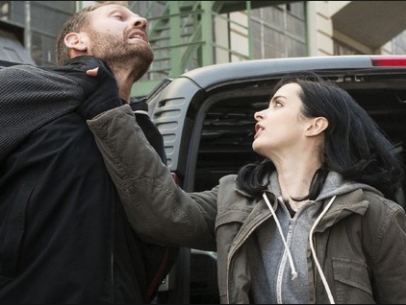 Now on to David Tennant, while he acted brilliantly throughout, he did slip into Doctor Who a few times, this wasn’t that much of an issue for me as a fan of his, but it was very noticeable. Only a minor issue though. (Allons-y)

Final Thoughts: Overall Jessica Jones was a good follow up to Daredevil and the tone and style matched its predecessor to help keep both shows contained and recognisable in their own Hell’s Kitchen universe.
The show was well acted and started very strongly, it was just a shame that the disjointed writing and direction in the second half of the series let the show run away with itself a little.
All involved can be proud of what they have created, and it will be interesting to see what state Jessica Jones is in when we next see her on the small screen.

What did you think of Jessica Jones? Let us know in the comments.