Chilling, sinister and utterly compelling. The penultimate episode of The Night Manager exploded on to our screens last night, in what was the best episode of the series by far.

From the very beginning you felt like you was in for an exhilarating ride, from Roper knowing he had a mole in his inner circle, to both parties watching the trucks being searched at the boarder.

In what was the best episode of the series so far, we were treated to a range of wonderful performances and a host of different locations, including an all familiar hotel allowing the show to come full circle in the show’s final act.

The one scene that will, rightfully, get everyone talking was the weapons demonstration scene. Hugh Laurie delivered a fiendishly good performance here, while Tom Hiddleston flipping from charming and smiley, to emotive and teary eyed.  It’s hard to imagine this kind of performance and high scale action sequence on the BBC. This moment felt epic. It felt like a TV event that will be spoken about for years to come.

As the series draws to a conclusion, there hasn’t been a single flat episode or so-so performance from the cast. The Night Manager is a prime example of TV done right, from cast to story this show has it all. It’s hard to imagine our lives without such compelling TV on a Sunday evening. Luckily for us, it has been announced that The Night Manager and it’s cast are returning for a second series, based on a new and original story.

But now is not the time to dream of a second series, we are still in the here and now, so let’s get down to this week’s episode. Spoilers ahead.

We begin on Roper’s private jet, where he tells Pine that he knows (thanks to his spies in MI6) that he has a leak. While he doesn’t know who, he is sure that someone in his inner circle has betrayed him, and that he will find out who it is.

Back on the ground, we see Roper give aid and resources to local residents, all of whom praise and thank him. We later find out these are residents of a nearby local village, who have been relocated due to Roper’s impending “sales pitch”.

A short drive from the makeshift camp, Roper, Pine and his crew finally arrive at their destination, Roper’s own private little kingdom, The Haven. Packed full of high tech weaponry and trained mercenaries.

Back in London, Mayhew has been offered a promotion, a promotion that will take him from the cloak and dagger of the intelligence service and in to the cosy confines of Buckingham Palace. The catch? He has to put an immediate stop Burr’s operation. Informing Burr didn’t go well, even more so when Burr asked for even more resources to bring down Roper.

Back at The Haven, Pine’s buyer had arrived and it was time for a sales pitch with an explosive difference. Pine uses all his charm and knowledge to sell the client the weapons on show, with an epic demonstration of the sheer destructive power on offer. After the demonstration Pine begins to make notes of all the trucks that the weapons are stored on.

Back in London, Steadman informs Burr that he has been re-assigned and must return to the US, while at The Haven things take a sudden turn as Jed and Corky turn up. It appears Roper is closing in on the person who leaked the information.

We get a glimpse of Burr’s home life, as we see her standing in a half painted baby room, and she opens the bedroom door for our first glimpse of her husband. This peaceful environment was soon shattered when Dromgoole appears outside her house. He tries to warn Burr off suggesting there will are always consequences for those who go against the top brass. 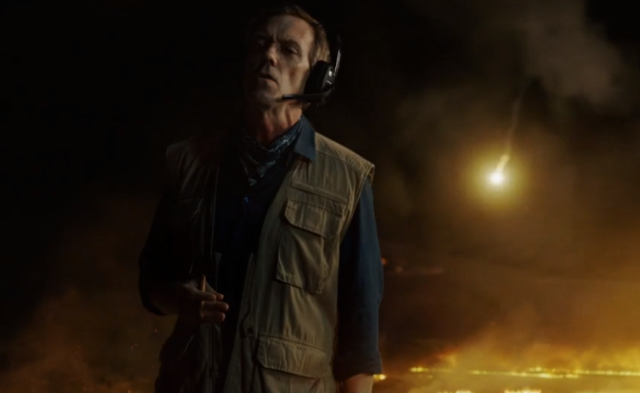 Back at The Haven there is a power outage, and inside his tent, Roper accuses Jed of leaking the information.  They are interrupted and Roper is forced to leave, with Pine entering the tent from a different entrance. He confesses his true objective to Jed and tells her that she must push the blame on to Corky. When Roper returns Jed begins to plant the seeds inside Roper’s head that it was his former number two that has betrayed him.

While the power is still off, Pine exits the base and bumps in to a small boy and his father pushing a cart. The man informs Pine that the village was not empty, and shows him an elderly lady lying dead on the cart. She was too ill to leave the village that Roper used for his weapons demonstration. Despite Pine pleading with them to turn back, they proceed to the village. We later find out they were killed by Roper’s men. Pine is able to pass his note to a taxi driver, and tells him to drive to Istanbul, where Burr’s team are still stationed.

On his return to the base, Pine is confronted by Corky at gun point. With Pine exposed the two fight, before Pine kills Corky with a powerful blow to the neck. Roper and his men come to the scene, with Roper now in no doubt that it was Corky all along. Roper tells his men to bury the body. (Goodbye Tom, you was the best thing about the show)

Burr receives Pine’s information and contacts Steadman, now back in the US, to get the American army to stop the trucks passing the boarder. In The Haven command center Roper, Pine and Jed watch as the Americans stop the trucks and search them. Thanks to a real time satellite, Burr and her team are also watching, expecting to see trucks filled with deadly weaponry. Instead they find only drilling equipment and seeds, the trucks are allowed to pass. Defeated, Burr slumps down at her desk.

Due to the information leak, Roper had deceived all around him, and diverted from the plan and sent the weapons by other means. Clever boy. Meanwhile back in London, Burr returns home to find her house trashed and the bloody body of her husband, while not dead, it was clear that Dromgoole was true to his word.

The final scene see’s Pine forced to return to the same hotel he worked in at the start of the series. Does Roper know? Is this why he has picked this hotel?
Roper enters his hotel room with Jed, leaving Pine at the door who imagines the dead boy of Jed lying on the hotel room floor, just like Sophie.

Best Scene: The weapons demonstration, chilling and sinister. From Roper’s clear enjoyment, to the watery eyes of Pine who has seen first hand the destruction that these weapons can cause.

By far the best episode of the series so far. The show continues to get better week after week and with the final episode next Sunday, we cant’t wait to see how they plan to top this.