With two giant men battling it out for ‘kill of the episode’, it’s safe to say Episode 2 was a continuation of all the great things accomplished in last week’s Season Six premiere.

We had some great tension between Jaime Lannister and The High Sparrow, as well as the showdown between the Night’s Watch and the Jon Snow loyalists. We also got our first look at Bran and Hodor, last seen at the end of Season Four.

Bran has been busy since we last saw him. Now under the guidance of, the recast, Three-Eyed Raven, he is able to use his greenseeing powers to explore the past and ‘walk’ amongst the shadows of what has already come to pass. In our first taste of his abilities, we see Ned, Benjen and Lyanna Stark interacting as children. And to Bran’s delight, he also gets a glimpse of a non-hodor speaking Hodor.
With the introduction of Lyanna Stark, and with more planned flashbacks to arrive this season, this could tie nicely in to fans of the R+L=J theory, especially given how this episode ended.

And speaking of the show’s ending, we cannot really go any further without talking about the big reveal in last night’s show. Welcome back to the land of the living Lord Commander Jon Snow.

We said in last week’s review that an Episode 2 return would be the likely option for Snow, and we are certainly glad he’s back!

After much persuasion by Davos, Melisandre performs the ritual of resurrection, despite her now apparent loss of faith. After the ceremony was complete, and Snow remained lifeless, it did creep in to our heads a little that the producers were trolling the audience.  But the second Ghost looked up, we held our breaths and shouted for joy as Snow returned to life. It was a genuine fist pump moment, a minute of pure jubilation for the return of one of the shows best loved characters.

From the performance of the actors, to the music used in this tense, and well put together scene, it was handled brilliantly. It was not only the return of the character that made it such a gripping ending. They took their time with it, they teased you with nicely composed imagery, they let it play out, which made the pay off at end have so much more impact on the audience.

Where Jon Snow goes from here? It’s anyone’s guess.  But with Sansa heading to Castle Black and Ramsay controlling Winterfell, it’s more than likely going to end with an epic battle for control of the North.

Speaking of Ramsay, it’s safe to say he was at his evil best last night. Killing his father, and setting the dogs on his stepmother and new-born baby brother. It was hard viewing, but executed (no pun intended) on screen perfectly.
While some are wishing his demise comes sooner rather than later, we personally don’t want to see him depart too quickly. Yes we all hate him, but he is such a compelling and interesting antagonist. His character is parallel with Joffrey. Yes we hated him, yes we all cheered his death…but he made for gripping viewing, and after he left, the show had no real main antagonist, not in terms of the level of hatred the fans felt for Joffrey. 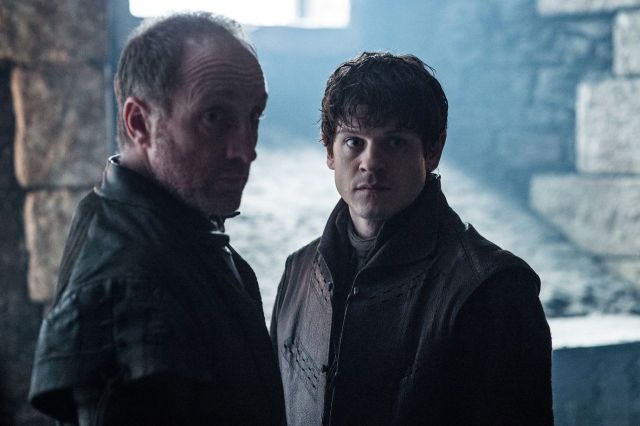 The show thrives on having such despicable and evil characters. The show needs these type of characters. Take Ramsay away and what are you left with? The Lannisters are being portrayed as ‘sympathetic’ this season, the traitors at Castle Black have been dealt with and the Harpies are yet to make an appearance. So taking away Ramsay would basically leave you with the Sand Snakes. But fans clearly don’t care that much about them or the Dorne story arc. So please. Let’s not be too quick to wish away one of the only true villains left on the show at the moment.

While we are very much ‘Team Ramsay’, in the sense that he’s good for the show, another potential new antagonist made his arrival on the show last night. Euron Greyjoy, Theon’s uncle and younger brother of King Balon Greyjoy.
Known as the ‘The Drowned God’, he made his debut on the show by throwing his brother off a bridge, sending Balon plummeting to his death in the sea below.

We have high hopes for Euron this season, and the Greyjoys in general for that matter. Yara will be keen to lead to Iron Islands, but Euron has returned for a reason, and will stake his own claim for power. With Theon set to return ‘home’ as well, it’s going to be a big season for the Greyjoys, and we cannot wait to see what direction they take it. 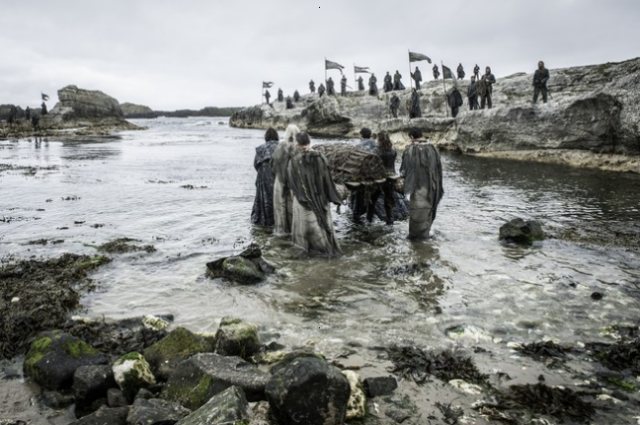 The episode wasn’t all baby killing and murder however.

Arya was welcomed back in to the Faceless Men fold by Jaqen H’ghar, after her resolve was once again tested with repeated stick attacks to the face. Now that she is back, her training can begin in earnest, so expect to see her being trained to be able to fight and manoeuvre without the use of her sight.

Tyrion also took centre stage in the episode, as he finally fulfilled his boyhood dream, being up close and personal with a dragon. The story Tyrion told about wanting a dragon, “even a small one” like him, was a heartwarming moment amongst the constant tension of being between two unpredictable, captive dragons. It was a brilliant scene, captivating and had the right balance of fear and humour. 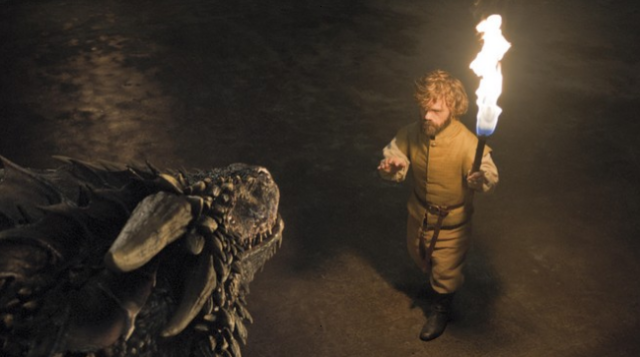 We are only two episodes in, but already Season Six has started very strongly, one of the strongest starts for many seasons. And with all the stories that are on the table at the minute, we can only hope that the show continues to produce such excellent and compelling TV.

What was your favourite scene in last night’s episode? Leave us your questions and best bits in the comments below.

One reply to “Game of Thrones S6:E2 Review (Spoilers)”