It’s Monday, so that can only mean one thing. Our Game of Thrones episode review!

So far, the season has been very strong from week to week. We have been treated to some compelling storytelling, and as each week seems to beat the previous, it’s hard not to go in to every episode expecting it to be even better.

Episode four of Game of Thrones opened once again at Castle Black. After Jon Snow declared last week that his watch had ended, it was clear we would not have to wait long to see what his next move was.

Just when you thought that the opening may not have much impact, there is a noise at the gate, and a trio of riders gallop in to the courtyard. Welcome to Castle Black Sansa, Brienne and Podrick.
Sansa and Jon embraced each other, this moment tugged on the heart strings of many fans, a throwback to the first season, when these two last shared the screen.
While this scene was very emotive, it was Brienne’s reaction, bowing her head in reflection, which really helped to enhance the importance of this reunion. You could infer that she is thinking of Catelyn Stark, and sending her a message that she had fulfilled another part of her oath. The scene had some many layers to it, it was such a captivating opener. 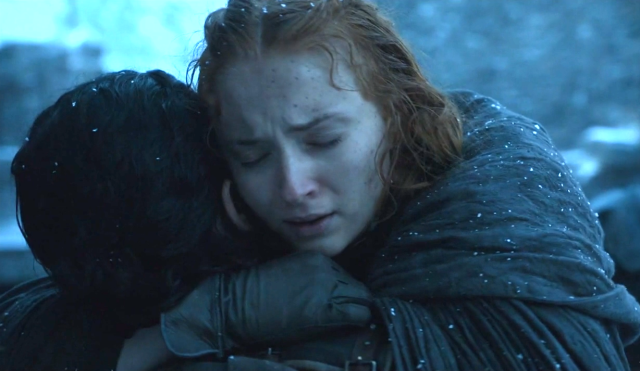 Sansa urges Jon to join her, to take back their home. To take back the north. While Jon is still undecided, it was Sansa who is truly starting to come in to her own. As we discussed in our season six opener review, this is going to be a season in which the female characters are the main focus. They are already building Sansa in to this strong, and prominent role, after five seasons of playing the victim.
We also get confirmation from Brienne that Stannis is dead, and it was the telling look that she gave to Melisandre that implied she may not be finished in exacting her revenge.

For the first time this season we get to see The Vale, and it’s clear that the actor playing Robin Arryn has had a growth spurt. But despite his new found height, the petulant child remains. We also get to see the eagerly anticipated return of Petyr Baelish. He wastes no time in weaving his web of words to convince Robin to send Lord Yohn and the Knights of the Vale to join Sansa Stark in taking back Winterfell. While Sansa is going to need all the help she can get, Baelish will have his own reasons in helping her reclaim the north.

In Meereen, Tyrion meets with the masters, who have been funding the Sons of the Harpy, in hope that a deal can be struck. It was good to see Tyrion once again use his diplomatic skills to try to reach an agreement that would end the violence and killings. While it seems that the masters have agreed to the deal, for now at least, we don’t think this means everything will be all sunshine and rainbows. We’re pretty sure this situation is far from over, and we have a feeling that a Harpy attack, and big ‘Meereen’ character death, is on the cards pretty soon.

While we do have so many interesting stories on the show, so far the Meereen story has yet to really take off. It’s provided us with some fun moments with the dragons, but at the same time, like with most of the “freeing the slaves” storyline from previous seasons, it doesn’t feel like it’s going anywhere. Yet. 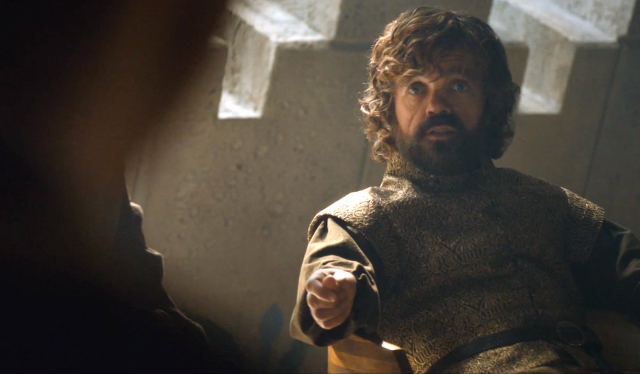 In Kings Landing, Cersei and Jamie are finally able to get the small council to take action against the High Sparrow. Cersei manages to convince Olenna in to action, as she would not want to see Margaery have to do the walk of shame as she did. It looks like very soon we are going to be seeing some bloodshed in Kings Landing.
Speaking of Margaery, she had a very interesting conversation with the High Sparrow. Here, Jonathan Pryce was utterly brilliant. This was acting of the highest calibre. It would be interesting to see who would win in a battle of words between Little Finger, Tyrion and the High Sparrow!

When we last saw Theon, he had left Sansa to return home. Now back on the Iron Islands, he is reunited with his sister. Who is, understandably, less than happy to see him, given what happened the last time the two were together. After a harsh grilling, Theon tells Yara that he wants her to rule, thus fuelling the Greyjoy storyline that will inevitably see Yara, and now Theon, fight for power against Euron. Another family reunion that is leading to a, albeit smaller, war?

You didn’t really think you could get through an entire episode without seeing that bastard Ramsay did you?
Ramsay is calmly peeling an apple, when Osha is sent in to see him. She tries to use her womanly ways to entice Ramsay and distract him, while constantly eyeing up a knife on the table. Just as she is about to grab the knife, another appears, and Ramsay drives it straight in to her throat. It was at this moment that we shouted “No! Not Tonks!”…

While her character has not been seen for a while, having Ramsay notch up another kill, of a familiar character, further fuels the fans hatred for him, and will only make the moment when he meets his demise, that more satisfying. (But like we said in our episode two review, let’s not get rid of him too quick. He’s great for the show.)

Back at Castle Black, fans of the book get a little fan service with the ‘Pink Letter’ scene, which sees Jon Snow read out a “come and get me” challenge from Ramsay, which ultimately convinces Jon to join up with Sansa to help free their brother and take back Winterfell.

While it stands at 2000 wildlings against 5000 Bolton men. They can add the Knights of the Vale and other northern families, many still loyal to the Sark name, to their numbers to make it a more even fight. The setup for the ‘Battle of the Bastards’ has begun.

While the Khals decide what should happen to Dany, she wastes no time in making their mind up for them. With a confident smile, and powerful, empowering words, Daenerys exacts a fiery escape, by setting fire to the hut and killing all inside. As Jorah, Daario and the other Dothraki look on, Dany appears out the flames.

With a confident, and commanding smile, everyone bows down in awe. As the flames rise around her, Daenerys, mother of dragons, once again has a mighty army at her side. And surely it is only a matter of time before she finally makes her way across the sea to the iron throne. Could we see her army being loaded in to boats in the final episode? Her dragons flying on ahead…what a visual that would be.

While this was pretty much a reused ending from the season one finale, it served its purpose and helped to push the story on. It’s clear that they don’t want to hang around too much in one place or on one storyline for too long, a criticism of previous seasons. This forward momentum approach is only going to help the show be much more enjoyable for the fans.

What was your favourite bit of the episode? What do you want to see next week? Tell us your thoughts in the comments below.

One reply to “Game of Thrones S6:E4 Review (Spoilers)”