Game of Thrones season 6 has just been one wild ride. It is definitely my favourite season so far and the main reason was because of the pace. It was like a train that went full steam ahead into every episode, with no signs of slowing down.

Seasons in the past have had episodes where the audience could take a breather but in this season there was no chance because there were awesome shocks and moments continuously happening in every episode. From moments like Ramsey murdering his father Roose to Hodor’s death. From Arya escaping the Face-less people to the battle of the bastards. The whole team behind GoT has done a tremendous job this season so I have faith in them that they can succeed in making season 7 just as shocking, sad and action-packed as Season 6.

Some of my favourite moments from this season include:

Battle Of The Bastards: This is probably the best episode I have ever seen since Game of Thrones began and probably one of the best spectacles to be shown on TV in my lifetime. From start to finish this episode was fantastic, from Dany’s fiery at Meereen to the epic battle at Winterfell. That shot of Jon facing down the charging Bolton cavalry with that epic music behind it was the shot of the season for me and will be remembered for years to come. Plus seeing Ramsey getting his face ripped off by dogs was a very satisfying moment but also a bit sad because I am sad to see that actor go. 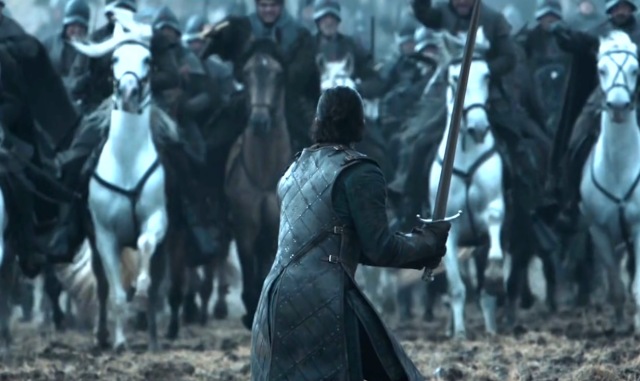 Hold The Door: This was probably the most shocking thing to happen this season in my opinion. Finding out how Hodor got his name was just mind-blowing and also very tragic and sad. I was shocked because, just like Jon Snow last season, I thought Hodor was an untouchable character and so sweet and innocent that he would just be left alone but sadly it was not to be, this show just loves making me cry. It took me quite a few days to get over his death, when I would watch the reactions channels Like Blindwave, Akasan and But Real Talk react to this I teared up and lost it all over again. I am going to miss Hodor, he was a man of few words but he had the biggest heart and personality that Westeros had ever seen. He held the door valiantly and will be remembered as the hero who held the door.

Walder Frey’s Death: This was the moment I was probably the most happiest with this season and I had to wait till the season finale to get it. The Starks finally get their revenge on The Frey’s for The Red Wedding. I cheered so loud and Arya has suddenly become my favourite character. This is a moment I have been hoping and waiting for a long time. Walder Frey is responsible for the most shocking moment in this series and responsible for murdering my favourite character at the time Robb Stark. I was very happy it was a Stark that delivered the final blow. I wanted to see a bit more though, I wanted to see him suffer just as much as Ramsey did.

Here are just some other favourite moments from this season:

– The Mountain getting back to his old ways of ripping people’s heads off.
– The Hound’s return. Hide your Chickens!
– Cersei’s epic revenge plan in the season finale.
– Arya being chased through the streets of Braavos by The Waif.
– Jon being confirmed as part Targereyn and part Stark.

There were others but there were just too many awesome moments this season. I am hoping to have just as more next season. I do feel after watching the finale last night that we are approaching the end. It feels like all the jigsaw puzzles are falling into place now for the epic battle between Westeros and the army of the dead.

We have Dany FINALLY returning to Westeros to reclaim her throne. Looking forward to her and Jon Snow hopefully meeting up next season and then taking on Queen Cersei and most likely getting rid of The Lannisters (apart from Tyrion and Jamie) once and for all. There are big battles ahead filled with Dragons and White Walkers and I cannot wait to see them.

What were your favourite moments from Season 6? Tell us in the comments below!

One reply to “Game of Thrones – Season Six Review”