With such a dramatic cliffhanger in Season 6, it was a painful wait throughout the Summer. Thankfully The Walking Dead aired at 2:30am this morning, simulcast with the US. It would be great if this was the case going forward, but it has been announced that this only for the season premiere. So it will be back to airing 24 hours after the US going forward, so it’s back to avoiding social media throughout the day!

We examined in length THAT ending in Season 6. We also mentioned the names of who were going to bite the dust. And…we got it right. But is that really a good thing?

Now don’t get me wrong. This episode was really, really good. It was definitely one of the strongest season openers to date. It is just a shame that the outcome was predictable. They bodged up with the fake-out of Glenn’s death last season. So they had to wait until the start of Season 7 to kill him for real. Doing it twice in one season would just not have worked. They let the fans forget so the scene would have more of an impact. But for some, like me, this actually worked against the scene. Seeing one of my favourite characters go out the show in such an iconic way should have stirred some deep emotions. Instead, I said out loud “called it”. As a fan I feel a little robbed of a truly gut-wrenching moment. Having read all the comics, it was not going to shock me as much as a non-comic reader, but the intensity of the final scene in Season 6 would have made for a much better ending to his character, rather than having it delayed.

As for Abraham, his character had kind of lost his way. Like Tyreese, you just felt like they had ran out for story to tell with him. So killing him off was a good way to remove a big secondary character, rather than killing off someone like Aaron. That would just leave the audience feeling cheated. 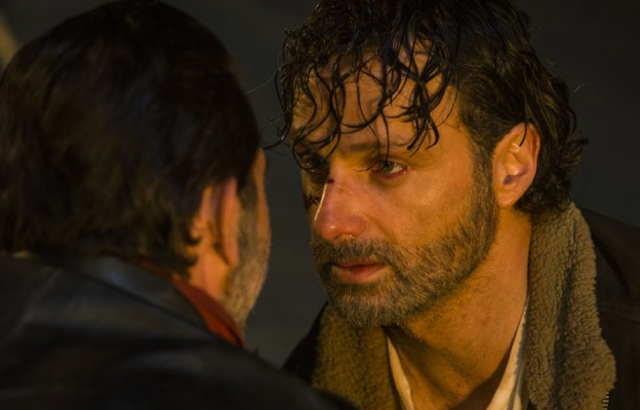 They did try and tease some of the main characters dying. Daryl’s lunge may have had some fans fooled, but his long established plot armour made his character’s vulnerability vanish seasons ago. Though it’s funny that because of Daryl, Glenn was killed. Will this mean that Daryl is finally going to have an actual interesting story? Like he did with Beth and Carol? Or will he just continue to be ‘a badass and look cool’ for yet another season. Don’t get me wrong, he’s a favourite of mine. But he needs to have more to do on an emotional and story level, because when he does it is absorbing viewing. Having the guilt of causing Glenn’s death might be just the thing to give his character an engaging story again.

Away from the deaths, a massive shout out to Jeffrey Dean Morgan and Andrew Lincoln. Both of these men gave an outstanding performance, and already you can see that they have a great on-screen dynamic. Morgan was sublime throughout, and he is proving already to be the perfect casting choice. This is as close to Negan from the comics as we are ever going to get.

Speaking of comics, there were plenty of nods, winks and downright replicas of a lot of material. Glenn’s death and the dialogue from Negan was very true to what we know from the comics. But it was the teasing of losing a limb that was the most fascinating. For non-comic readers, Rick loses his hand, and the amount of potential foreshadowing to this made for interesting viewing. “You’re gonna need this” says Negan as he hands the axe to Rick. The scene where he wipes the blood off the axe on to Rick was also a nice little visual. And finally we have the bluff of Rick having to cut off Carl’s arm. While you can understand from a practical point of view Rick losing a hand might impact the show on a production level, it does seems like they may head that way given the amount of subtle hints sprinkled throughout the episode.

Things that weren’t so great?

As an episode, there wasn’t much to pick at in terms of negatives. So this was a great marker to put down, but now we just need to hope that they continue to produce episodes of the same quality on a weekly basis. A big ask, but hopefully they can deliver.

What did you think of the episode? Did they make the right call in terms of the deaths? Tell us your thoughts in the comments.