First of all, there will be references and comparisons back to the source material in which this remake is based on. While we don’t want to keep using the source material as a referencing point, this version failed on so many levels it’s hard not to.

Before we go through the bad, and trust us, there is a lot of it, we will start with the film’s two strongest factors.

Visually, the film is spectacular. Watching the film in full 3D IMAX made for a tantalising viewing experience. But even if you watch this movie in 2D, the film will still hold up visually. The set designs, costumes and VFX were of the highest quality and will probably give the film a good shot at the Oscars next year.

The second highpoint of Ghost in the Shell was Juliette Binoche. Out of all the cast, she stood out the most, putting in a high-level performance. She brought an elegance to the film that was sadly lacking for the most part. Even though her material wasn’t the greatest, she made it work and brought her character up many levels.

Sadly, that is where the good things end.

Before its release, Ben wrote a piece on Ghost in the Shell and in interviews, the cast and crew all claimed that whitewashing was not an issue with the movie. Well, IT IS an issue, and they even managed to work it into the narrative. We cannot go into spoilers, but no matter what the people behind this movie claim, they dropped the ball big time. People have taken offence to this movie, and it is extremely understandable as to why. 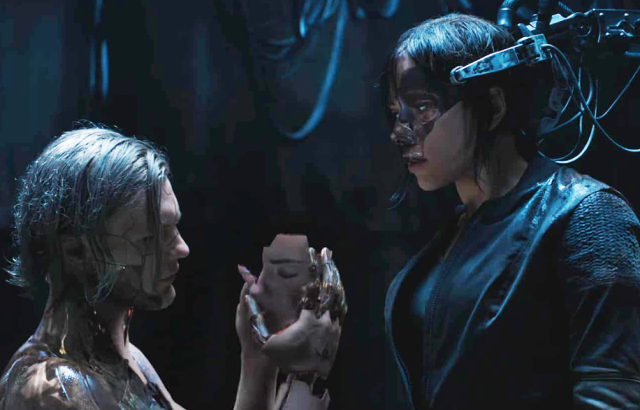 The next big problem is that they have decided to slightly alter the philosophies and values of the source material. These minor changes actually have a big impact on the story and the world that they have tried to created. These changes were unnecessary and have actually ended up doing more harm than good.

The film’s story is also a little disjointed and does a poor job of communicating its ideas across. If you watched this movie with no previous knowledge of any of the source material, you probably could leave the cinema thinking it was an ok sci-fi movie. But the fact is, many will know what to expect, or at least have done some reading up on the film’s origins.

Another problem the film suffers with is the cast. Reducing your supporting cast to minor roles within the film and limiting them to minutes’ worth of screen time was a major misstep. The members of Section 9 play an important role in the franchise and with The Major. None of this is explored and expanded upon, and the majority of the cast are there just to fill the background space.

Despite all the masterful visuals and design, the issue of whitewashing, the story, characters and the film’s editing do so much damage to the property, that Ghost in the Shell can only be categorised as a failure.

One reply to “Ghost In The Shell Review”