We may be only two episodes in, but it really does feel like the shorter season format is already having a positive impact on the show’s pacing.

In this second episode, we were once again given plenty of story and character development with a whole host of different characters. We were also treated to marvellous action pieces that saw episode two end with crashing sails and screams of unfortunate souls burning to death.

If the pacing and story continue to be this good, it would be a shame the show has to end at all.

So let’s begin our recap of ‘Stormborn’.

The episode starts by taking from its title in the literal sense, as a violent storm rages over Dragonstone castle. Daenerys, leading her small council, has a tantalising verbal back and forth with Lord Varys. This was an intriguing scene to watch unfold, with Varys once again proving he is a master with words, which ultimately gives him the victory this time around. We also finally get some vintage Tyrion, and he persuades Daenerys to make contact with Jon Snow. We all want this meeting, so thank you Tyrion, thank you very much indeed.

The concept of not using brute strength and slaughtering thousands is a clever move and, ultimately, the right course of action. Even if Lady Tyrell thinks otherwise. I don’t think we’ve heard the last of the Tyrells just yet. Revenge will be had one way or another, but how that might play out is going to be interesting to see.

Not much time was spent at Winterfell this week. Jon finally hears from Samwell in regards to the Dragonglass and all the pieces align for him to journey down to meet Daenerys in person. While Jon is going against the wish’s of his lords and lady, this puts Sansa back in play for control of Winterfell. Once again she openly questions Jon’s actions, stopping short of calling him out on his leadership suitability. Littlefinger must be licking his lips watching this unfold. And it will only be a matter of time before he makes his move. All the chess pieces are almost in position.

The Jon v Sansa thing will play out for a few more episodes yet, but with Sansa now ruling Winterfell in Jon’s absence, will she push ahead with her own agenda? While Sansa is not wrong in a lot of what she says, her methods and her open descent are questionable. But this all adds to what should hopefully be an engaging story arc.

In our third ‘war council’ gathering, Cersei has called her remaining lords to rally and unite them against Daenerys and her army.
With the valuable asset of Lord Tarly in attendance, she makes a strong case and settles any doubts that they cannot take on dragons.
Jaime trying to get Lord Tarly onside is a clever play too, as they will need his expertise in strategy for the war that lies ahead. But while it seems he may side with the Lannisters, his loyalties to the Tyrells may just put a spanner in the works.

While the dragons do make Daenerys very OP, the introduction of a powerful new weapon could act as a much-needed leveller. This was important for a number of reasons, with the main issue as mentioned above, Daenerys is just too over powered. She has three WMDs at her disposal, and for a more interesting and engaging story to prevail, at least one these needs to be removed from play. And soon.

The show started on a high and it ended the same way.

The battle of the two Greyjoy armadas was both visually breathtaking and brutal all at the same time. Euron made another flamboyant and masterful entrance. While some parts of his character are verging on a little too theatrical, it still brought a big smile to my face and as a ‘moment’ it was pretty outstanding.
A night time battle scene on some boats was a refreshing change of pace from the usual fields and castle halls.

As predicted in last week’s episode, Euron’s ‘gift’ to Cersei would be the capture of her enemies. And with Ellaria now in his possession, he is another step closer to the marriage his so desperately craves. As someone who cannot stand Ellaria, the Sand Snakes and Dorne as a whole, I was very much Team Euron for this final part. Seeing both Obara and Nymeria fall at Euron’s hands was very pleasing. But as a fan of Yara Greyjoy, I hope she is not removed from the show just yet.
What I wasn’t so happy with, was watching Theon’s redemption arc shattered into a million pieces. This is was so disappointing and frustrating. Yes, he clearly has lasting mental scarring from his prolonged torture. But after cowardly fleeing in the way he did, it feels like he will never truly get his redemption. And that’s just a tad frustrating.

At the Citadel, Samwell and Ser Jorah had some nice interactions, and the eye watering scene with the greyscale ‘cure’ was agonising to watch.

Arya meeting Hot Pie and learning of Jon’s rise to power was a key moment in her arc this season. What does she do now? Continue on to King’s Landing? Or head home for Winterfell. More than likely she’s heading North, and this might not bode well for Littlefinger.

We get our first real ‘Game of Thrones nudity scene’, with Greyworm proving that the tongue is mightier than the (pork) sword. – I am both amused and appalled at this line. So I apologise to you, dear reader.

Arya’s brief reunion with Nymeria was also a nice little scene that also felt like a goodbye at the same time. But who knows? 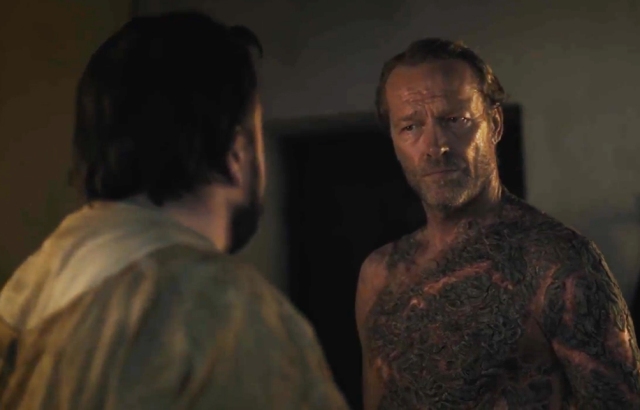 Another very strong episode with plenty of story progression. With the different factions making their own plans, paths are soon to cross that will dictate the fate of Westeros. A shift in focus to the human threat allowed for the supernatural elements to take a break for a week, ensuring that part of the show remains special. With great character performances throughout the episode, episode three cannot come soon enough. While we essentially got ‘three meetings’, the dialogue was sharp and the scenes were well executed. So any repetitiveness was not really felt due to the quality of the writing.

Finally. The most important factor to consider is that Daenerys was smug about Jon ”bending the knee”. But unbeknownst to her, she has just lost all her ships, important allies and a good portion of her forces. With Cersei planning on dragon killing weaponry, Daenerys might need Jon more than she knows…

What did you think of the episode? What was the best thing about it? Let us know in the comments.