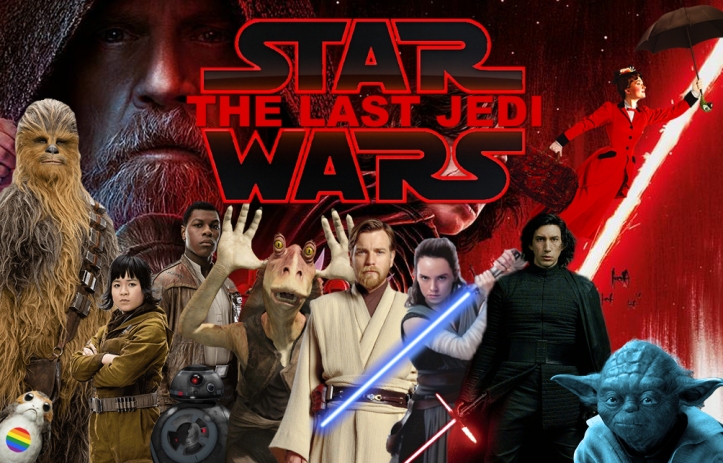 Hopefully, you have read our non-spoiler review and have already seen The Last Jedi, if you haven’t seen the film yet, go away. But come back after you have of course!

There is no real order or structure to this article, it is basically a ‘mind dump’ to get all my spoiler filled thoughts and theories out of my head. We don’t have a podcast in which we can get these thoughts out in conversation, so we have to make do. Like I said, there is no order of priority, I’m writing this as the topics come into my head.

Ok, so I have to start with it… 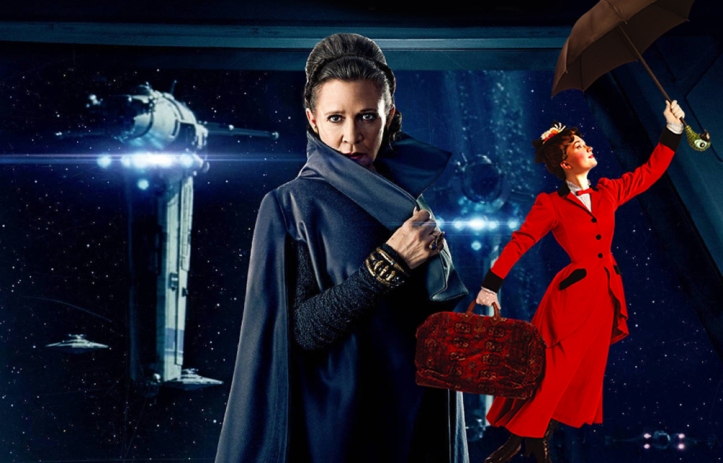 Why. Why did this have to happen? As I mentioned in the non-soiler review I loved Carrie Fisher in this movie. It was the perfect, fitting send-off. When she flew out of the bridge I thought, “Wow. That’s it”. I teared up, I came to terms with her character departing the franchise. Then we see her in space, and I was like “Erm, ok this is a bit too much”. Then she started to comically fly back inside the ship whilst seemingly ‘dead’. At this point, my watery eyes of emotion went wide with ‘WTF was that!’. Oh boy, was that cringeworthy. It was not needed. While not majorly important, her later scenes were still a way to give her character a proper send-off. I’d rather they just had her escape before the explosion than having to sit through such an odd scene. 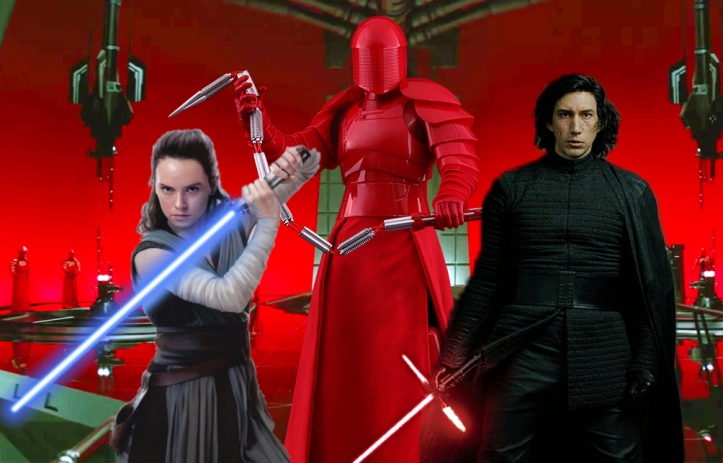 OH MY PORG! When Rey and Kylo join forces to take on the Praetorian guards? Outstanding. The creative ways everyone involved in this scene used their respective weapons was brilliant. It was so imaginative, I also loved that there was a female Praetorian Guard, but they didn’t give her the boob armour. This harks back to what I mentioned in my non-spoiler review about positive representation. 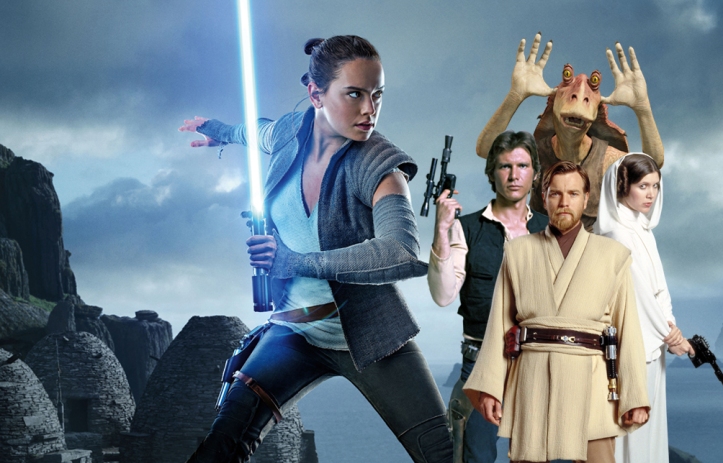 Well, there you go. They told you back in The Force Awakens trailer, they weren’t lying. Rey’s parents were essentially junkies who sold their kid for a fix. All the theories about being a Skywalker, a Solo or a Kenobi. Nope. Move on. Now there will be those who say this is just Kylo playing with her mind. But in a way, I’m glad that there is no legacy hanging over her, it also ties in with the final scene of the film. More on that later! 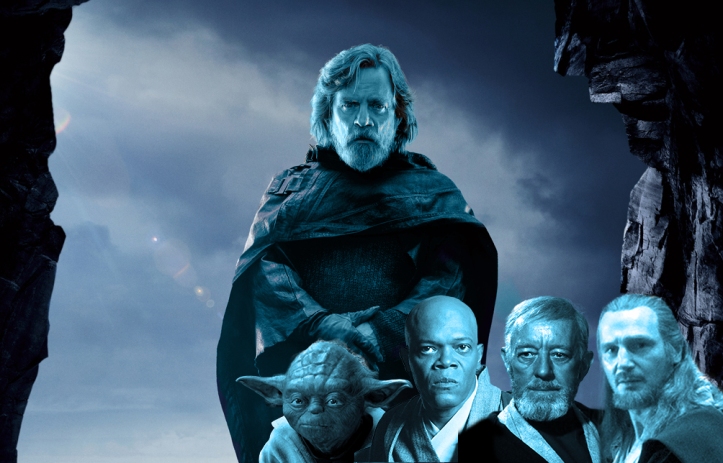 The Death of Luke Skywalker:

My childhood hero. Gone. I knew it was going to happen, I was waiting for it to happen. But it did not happen in the way I expected. But then again, Luke told me that things were not going to go the way I think. And they didn’t. But the way in which he passed into the force was such a special moment. His robes falling away after seeing the twin suns with that iconic theme playing. I wasn’t crying. You were crying.  As for the force projection? There was something similar in Star Wars Legends in the form of ‘Force Phantoms’. Yes, this was part of the Star Wars EU which is technically now no longer canon. But it can be used as a counter-argument to those who are confused as to why Luke can suddenly do this. 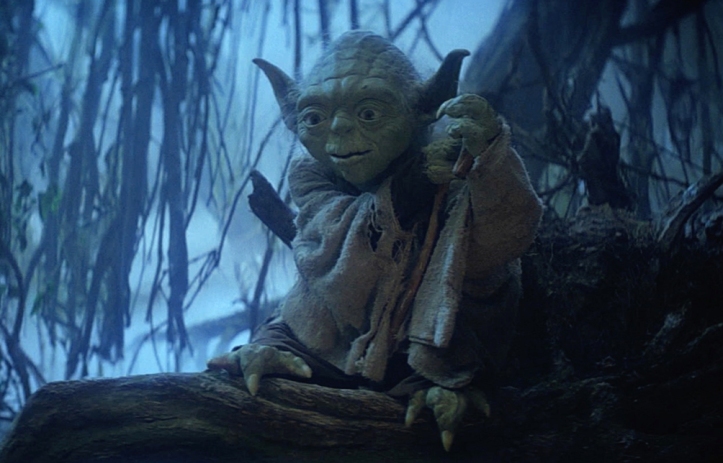 Probably one of my favourite moments in the film. It was totally unexpected, I never saw this coming. But not only was it fantastic to see Yoda back in the Star Wars universe, but to see him as, mostly, a puppet was such an amazing experience. I loved Yoda in Empire when he grabs the torch and laughs, waving it around with joyous glee, he was so mischievous. And we had some of that here which I loved, it was a great throwback to The Empire Strikes Back. If I was being greedy, I would have loved Obi-Wan to have appeared also, but what we got was great enough as it is. 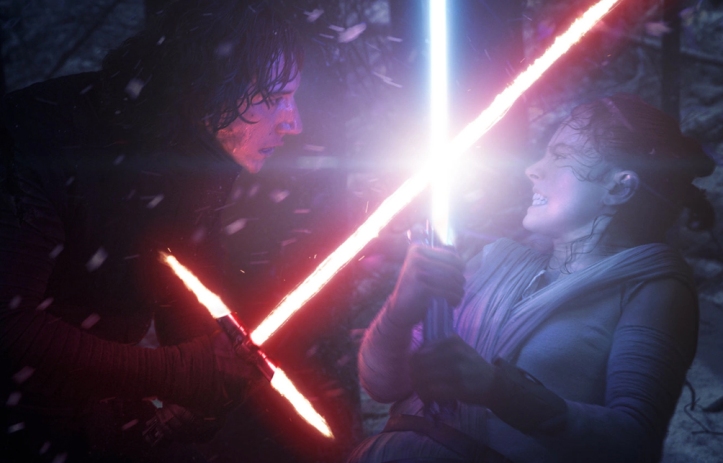 Whose Franchise Is It Anyway?:

Interesting that Rey sort of fell away after the big parent reveal? With more focus on Kylo after this point, and Rey being teased with going Dark, is this trilogy actually centred around Kylo? After all, it is dubbed the ‘Skywalker saga’. Technically he is one, so it makes sense. I think a lot of us wanted to go down the Grey Jedi path, but I think with J.J back on board next, some of the direction Rian Johnson steered Star Wars towards may get another course correction to be a lot more black and white, a lot more easy to digest for a family audience. But technically this is a theory, and if The Last Jedi has taught us anything, it’s “screw your theories!” 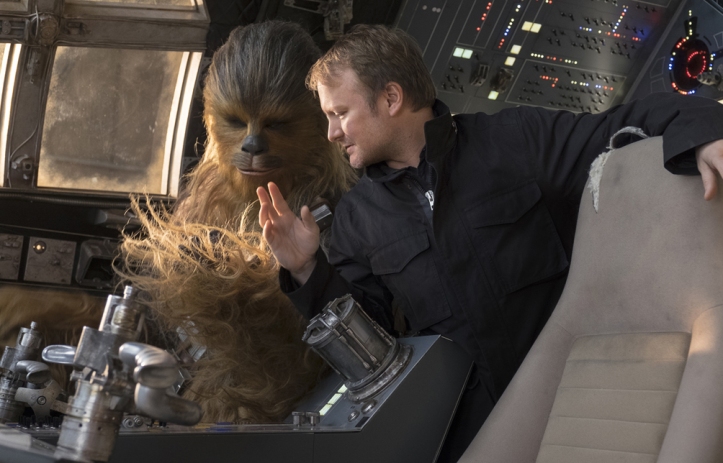 The Last Jedi Is So Unique:

While Rian Johnson blows the mythology wide open, there is also a lot of scenes that mirror not only The Empire Strikes Back but Return of the Jedi. There were so many great new things in The Last Jedi, but there was also a lot of familiarities, familiarity that The Force Awakens was used as a negative by some fans. So what about The Last Jedi? The end of the film? That’s the Hoth battle but they stuck it at the end rather than the beginning. Master killed by the apprentice to save someone else? Hello, the final act of Return of the Jedi. And I could sit here for hours and list plenty more examples, ranging from the obvious to the subtle. Now I don’t think any of these things are negatives. But don’t be that fan who will try and say this movie is truly different and unique. It did some amazing new things, things I loved, new editing styles, new concepts, but it was still a Star Wars movie, and it felt very familiar, which, like I said, is a NOT a bad thing. 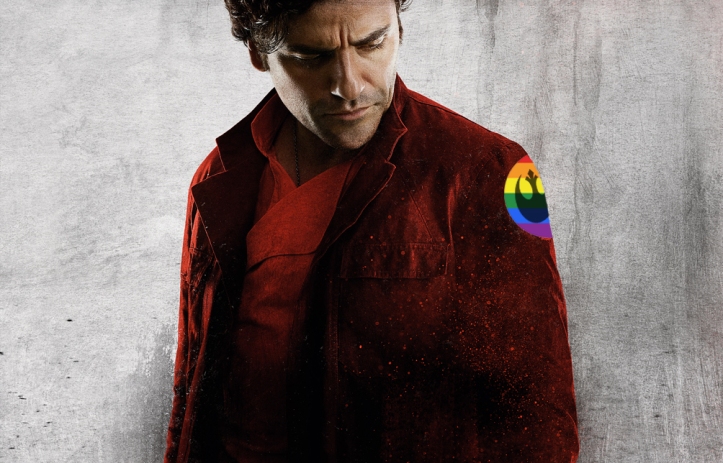 Poe No Flying The Rainbow:

Come on Disney. I want my Poe and Hux romance. You made positive steps with Beauty and the Beast. But you took a step backwards in The Last Jedi. Oscar Isaac is always stating in interviews about Poe’s sexuality. Just get it out there and that will be that. It’s 2017, this shouldn’t even be a thing. We have a cast now in the Star Wars universe that reflects a much broader spectrum of humanity. All this talk of memos to pull this angle is hopefully just internet rumours. There is even talk that Poe has now fallen in love with ‘the memory of Holdo’ and that he will use that as motivation going forward. Eugh. Maybe J.J will bring it back? Afterall, he and Isaac were the ones very keen to pursue this angle. 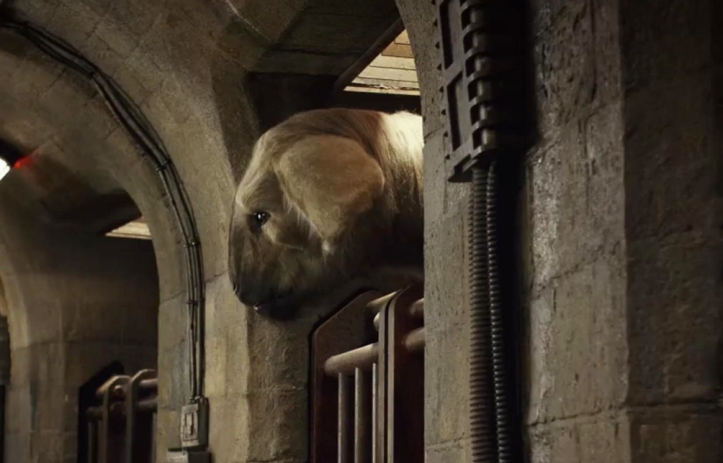 While it was nice to have a new place to explore. Canto Bight was essentially the Star Wars equivalent of Monte Carlo. A lot of rich, uncaring lifeforms congregating together to enjoy wealth whilst others suffer around them. Now, sorry for getting political, but I detest horse racing. And the parallels here, with the inhumane treatment, whipping and subsequent freeing of the Fathiers, was a personal plus point for me. I love animals, so seeing them set free and away from exploitation was a nice moment. Whilst we’re in Canto Bight… 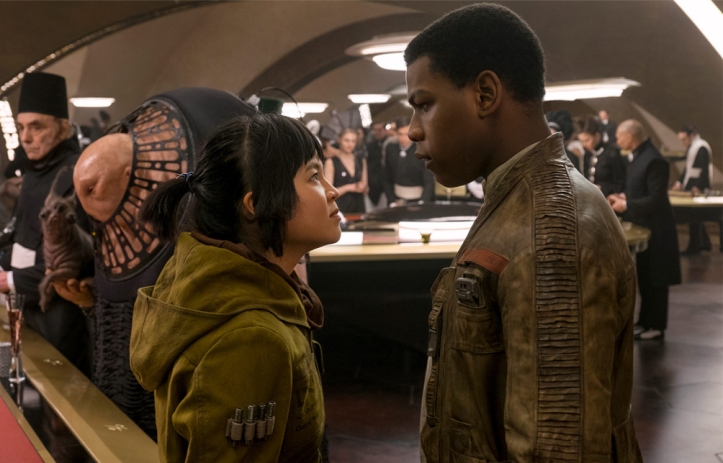 Some may have been happy to see it cut out of the film entirely. It would have cut the running time and done away with a pretty un-important subplot. For me? I would have trimmed, rather than done away with it altogether. I don’t care about why they were there. For me, that wasn’t important. It was fine, I didn’t mind it. But that scene wasn’t about me. I’m white, I see a representation of myself in most things, especially if the character is male. I will defend Canto Bight with the augment by saying look who was in that scene. Yes it could have been written better and It may have been a wasted twenty minutes to some, but to others, it would have meant a great deal. Representation matters. 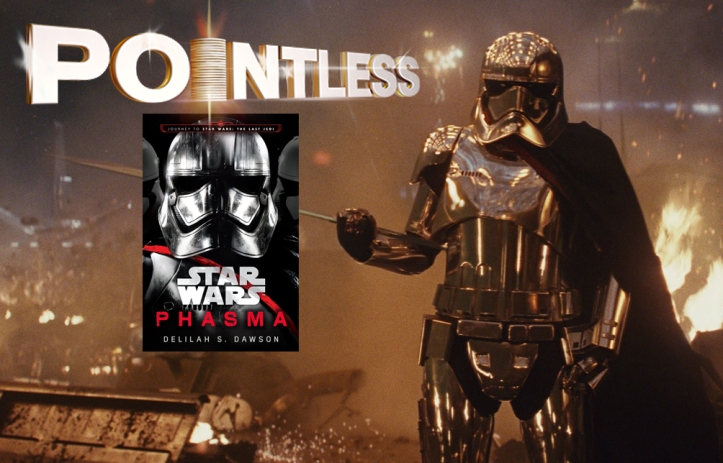 I bought the audiobook of Captain Phasma’s origin story, I loved how they explained so much about her past. They gave her character so much depth and it made sense why she gave up the code in The Force Awakens so easily because she aligns herself and acts in a way that best ensures her survival and improves her position and situation. It was a great book and made so much sense and I’ve been saying to all the doubters that she will come back and be the badass she was presented as. NAGH. Not happening. This was the one part of the film that angered me. Not because I was wrong, but because they sold her as a master of melee combat, but she gets beaten by the janitorial comedic relief so easily. It undermined everything in her canon. Some people are already saying she’s going to come back and be all disfigured. You know what, don’t bother. She’ll be onscreen for a minute or so then gone again. Just leave the character alone now. So much wasted potential. 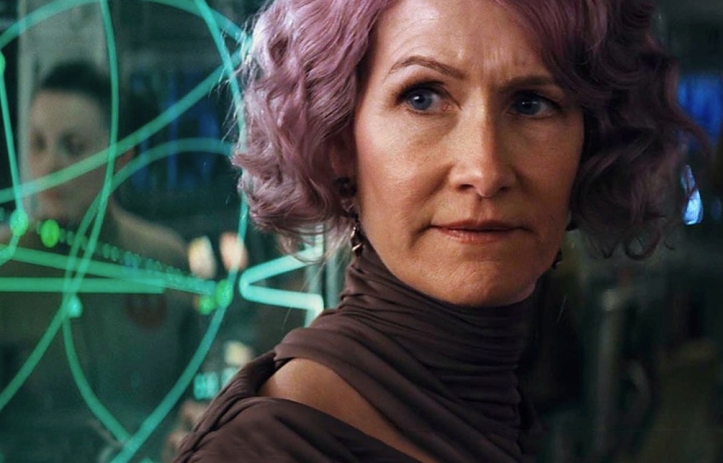 I mean, it’s probably not, but it’s up there. My favourite scene in the entire movie centres around a character I disliked for the majority of the film. The movie is packed full of sacrifice, and Vice Admiral Holdo was no different. First of all, I can’t believe we’ve not seen this before because it makes a lot of sense. Even if you are in an X-Wing, you could do some damage. Even when you strip away the character and story aspect of the sacrifice, the end result is just mindblowing. The way they executed the scene, with no sound and the bright light and shadows, I can’t remember the last time I was genuinely in awe at a cinema as I was here. In my screening, there were around 8-10 people who audibly gasped. It shocked the entire audience. I loved everything about this scene. Hindsight is a wonderful thing, but could you imagine if it was Leia in that spaceship and not Holdo? Talk about going out with a bang. 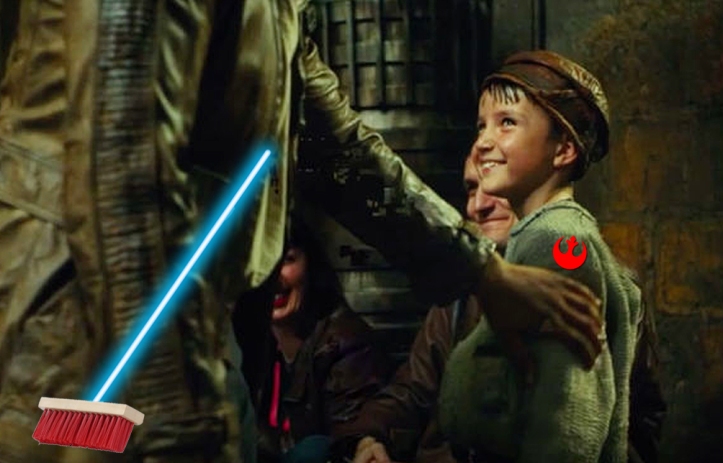 Wow. I mean, Ok the end of The Last Jedi did go a little Return of the King on us. But the final scene that we did get was fantastic. The subtle way Temiri force pulls the broom towards him, the way he looks up into the sky, pointing his broom like a lightsaber. Wearing THAT ring. The music, oh the music. This scene is not only a homage to Luke in A New Hope, but it reinforces the issue surrounding Rey’s parents. There is life after the Skywalkers and Solos. You don’t need a famous force user parent, you can be ‘no one’. I love where they seem to be going with this.

So there are my ramblings and theories. What do you think? Have you got any of your own? Let us know in the comments.