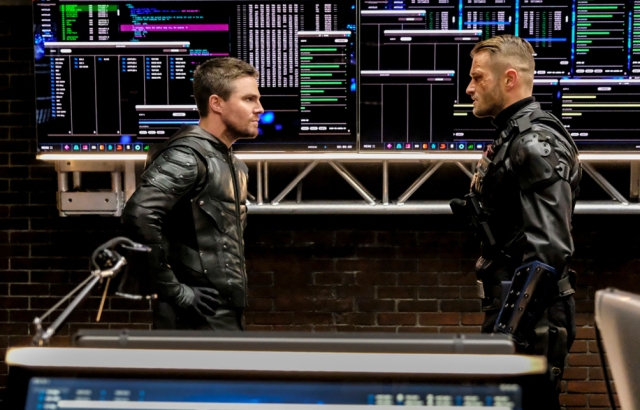 We start off with Oliver joining the SCPD and ARGUS in setting a trap for Cayden James. As usual he’s one step ahead and a bunch of ARGUS agents die as a result. He’s made $17 million from the City so far and Oliver is panicking now as there’s no money left.

This episode mainly revolves around Vince and Dinah, and we are given some flashbacks which show us them meeting for the first time and working together on a case that led to Vince being shot and Dinah becoming a meta. Oliver and Diggle intercept a secret meeting between Vince and the new team. Oliver is not convinced they can trust him but agrees to hear him out which eventually results in them all agreeing to work together. He does however bring up a valid point. Why should Oliver trust Vince when he spent most of the previous season trying to kill them!

Vince breaks into Cayden’s IT office to hack his systems and find out where he has planted a bomb he’s planning to set off. He is caught in the action by the man himself and while initially it seems like Felicity has managed to talk Vince his way out of trouble through his earpiece, Cayden isn’t fooled. Vince is brought in and is tortured by Anatoly. 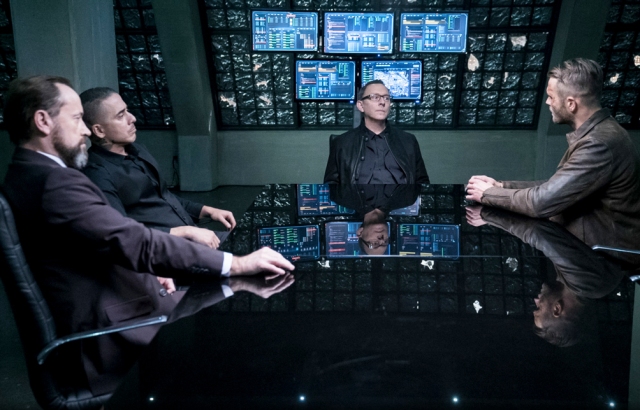 Felicity finds Cayden’s bomb. As they all start to plan their mission Vince activates his comms and NTA run off to save him while OTA are left to tackle the bomb. As Dinah catches up to Vince, he tells her he hadn’t activated his comms and they realise it’s all another trap. An explosion traps Dinah under some rubble and she’s left to helplessly watch on as Laurel is instructed to find Vince’s breaking point. She screams in his ear and he is unable to regenerate from the damage.

Dinah struggles to deal with loosing Vince for a second time, especially as the other team didn’t manage to find the bomb. Oliver goes to her house, and if she was expecting an apology she should have thought again. He tells her that this was Vince’s choice and that no one else can be held responsible. However, Dinah is not in a forgiving mood and vows to kill everyone one of Cayden’s gang, starting with Laurel! Not too sure how Quentin will react to this as he’s further convinced himself that Evil Laurel wants to be evil no more due to her following him around in the shadows.

I really enjoyed this episode, and kind of feel bad for doubting Vince’s good intentions. Its a shame to see him leave the show so soon, but I think this is only going to push Dinah’s brilliance even more. I feel like Dinah is really coming to the forefront of the show and I like it! She’s a great character and I’m putting it out there … she’s been my favourite Canary! Controversial. The episode ends with Oliver and Felicity wondering who would have edited a video to show him killing Cayden’s son to set him up? My money is on Anatoly. With Oliver running out of money from Star City things are sure to get a whole lot worse very soon.

What did you think of the episode? Let us know in the comments.