Ten years in the making and eighteen movies later and it all comes down to this, Avengers: Infinity War! With the tag of “the greatest cinematic crossover of all time” pinned to it, the pressure is certainly on to meet the hype and expectations.

First of all, I’m glad we caught the midnight showing as this film is one big spoiler fest. The pace is unrelenting and the film rarely stops to pause, it is essentially one large action sequence. The film has so many characters to fit in, how could the Russos pull this off?

First of all, I really enjoyed it. The film wastes no time setting the story up, you are dropped right in at the deep end, it’s a real sink or swim movie. The scale of the movie is breathtaking, with so many locations and worlds, both new and old, featured. It feels epic, it feels galactic. And that feeling filters down to the abundance of characters on display. It was always going to be difficult to juggle so many characters. And depending on your preferences you will either be happy or frustrated. Even some of the big household names take a backseat to make way for other characters, but personally, I was pleased with the choices they made. In terms of the superhero roster, Iron Man, Spider-Man, Thor, Doctor Strange and Gamora are at the top of the pile in terms of performances. But to be honest, there aren’t really any disappointing performances.

So what about the new characters? Well for starters, Peter Dinklage is the standout addition to the MCU. It was surreal and hilarious, but you have to see it to get my meaning. As for the likes of the Black Order (Corvus Glaive, Proxima Midnight, Ebony Maw and Cull Obsidian), while they started the movie strongly, they soon became MCU villain fodder which was very disappointing. Especially for Maw.

Now, the film may be called Avengers: Infinity War, but it could have easily been called ‘Thanos The Movie’, and that is not a bad thing. Simply put, Josh Brolin was sensational. His motion-capture performance is at an Andy Serkis level of quality. He is easily the greatest villain ever to grace ANY comic book movie. Thanos is also the only one in the movie who gets any substantial character development. I loved how much time and effort they spent on him. You followed his journey throughout the movie and can understand his motives. He is a complex, layered and menacing villain. He was a real threat, he was not made a joke of at any point. Vulture, Hela, Killmonger and now Thanos, Marvel are finally getting their villains right!

So, great action, characters and a wonderful villain, this film has it all right? Sadly, there were two issues that I was disappointed with. But without going into spoilers it’s difficult to explain. Essentially, something happens in the middle of the movie which is set up as a BIG moment in the movie, but due to real-world announcements, it is ultimately meaningless. This was then further hammered home during the final act. While I understand what they wanted to do, the execution was terrible. I felt cheated, I felt robbed of character moments from the first half of the movie. It was such a cheap, unsatisfying end to the movie. All the threat and consequences built throughout the movie was undone. Better execution could have delivered a much more powerful ending. 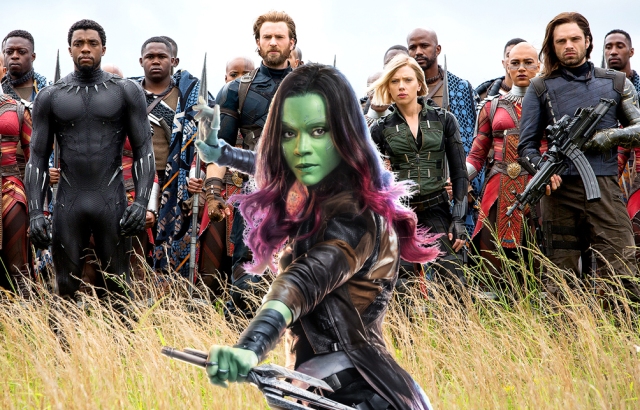 As much as the execution of the ending irked me and despite the lack of substantial storytelling and narrative, we were treated to some of the greatest MCU moments of all time. The film was more about these moments than a complete film. It lacked the story and drama complexity of a Civil War or The Winter Soldier but made up for its shortcomings with humour and some iconic scenes. It was never going to be an easy task, but overall the Russos have delivered. Is it my favourite MCU movie? No. Is it top five or six, possibly. Again, I loved it, don’t get me wrong, but it was definitely more of an ‘experience’ than a complete movie.

Overall, Avengers: Infinity War is a strong entry into the MCU and has definitely started the winds of change heading into Phase 4. Iconic moments, surprising team-ups and wonderful character interactions made for an enjoyable exciting ride. Thanos is the best thing about the movie, and the movie is worth re-watching for his performance alone.

What did you think of Avengers: Infinity War? Leave your SPOILER FREE comments below.