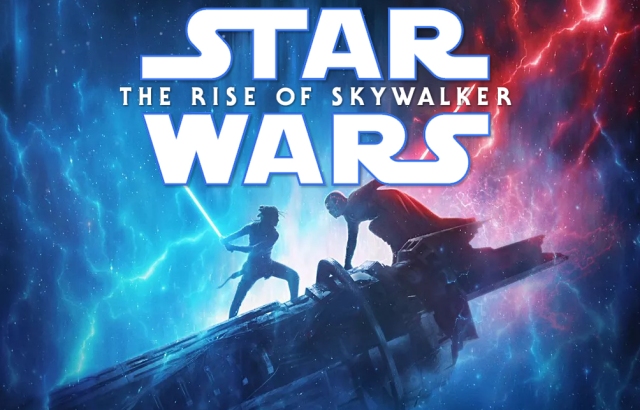 The final trailer for Star Wars: The Rise of Skywalker has landed and it is safe to safe that the Skywalker Saga is ending in an epic way!

On the back of The Last Jedi, there is a section of ‘fans’ who are out for blood. Now don’t get me wrong, there were issues with The Last Jedi, but in terms of the hate and faux-outrage that followed it’s release, the reaction by some was just farcical. I’ve gone on record many times about my love of The Last Jedi, that is not going to change. Even if a film isn’t the best, my love of Star Wars is never going to change. There are things I love about every Star Wars film, so to those ‘fans’ or Youtubers continually trying to attack Disney’s Star Wars run, I say just give this film a chance. It’s Star Wars, it’s the finale of 42 years worth of storytelling. This is going to be a must-see event and regardless of the film itself, we should be supporting it to ensure that we continue to get more Star Wars projects in the future!

As for the trailer, it just smacks of going out with a bang. From the John Williams score to the stunning visuals. You can hardly catch your breath as everything just flashes by so fast. I know it sounds silly, but this trailer oozes ‘Star Wars’, so many themes and visuals that we have known to come and love over decades of movies. This chapter of the Star Wars universe is closing, but it doesn’t mean that it will be the last!

Unlike some, if my Star Wars theory doesn’t pan out, I don’t blame the film. The Last Jedi was a prime example of this. ‘Fans’ kicking off being they didn’t get what they wanted. I fully subscribe to the ‘Your Snoke Theory Sucks’ school of thought. I will do a little speculation in this trailer breakdown, but ultimately I’m just happy to be having more Star Wars!

If you haven’t done so already, be sure to check the trailer below.

We usually only pick our top five scenes from the trailer to take a closer look at, but I just couldn’t do it this time around. I’m breaking the format and we are going to double it!

10 Things From The Trailer:

Later on in the trailer, there is a breathtaking shot of a Star Destroyer breaking through the ice. And here we an ice world that must be part of the same sequence. We’ve heard that we will be visiting a new planet called Kijimi. Kijimi is the home planet of a new character called Zorri Bliss (Keri Russel), she is a smuggler and the leader of the Spice Runners of Kijimi. The planet is supposed to be full of mountains, and be both warm and cold. So this could be that planet. The main takeaway from this shot is how beautiful it looks. Some of the visuals in The Last Jedi were truly incredible and I hope that this trend continues in The Rise of Skywalker. Going off some of the shots in the trailer, that appears to be the case!

Now THAT Is A Throne!

I love that they have decided to bring Ralph McQuarrie’s ‘Emperor’s throne’ sketch to life! It is an iconic image that was never used in the original trilogy. But I am so happy that they are going to have this stunning set-piece on the big screen! I would love to have a shot of Palpatine sat on the throne but feel this might be more for show than for use. Regardless, it is such an impressive spectacle.

The dog-fight in Rogue One really delivered a truly epic space battle! But given the number of ships on show in this shot, I really hope they take that and make it into the largest space battle in cinematic history! Having the Falcon fly into the frame was such a great moment, and you get those Return of the Jedi vibes, even more so when you can probably take a guess that it is Lando in the cockpit!

There are lots of Star Wars ships on show in this one-shot. We’ve got Hammerheads, U-Wings, Vakbear Cargo Frigates, Mon Calamari Cruisers and THE GHOST! Now, yes it could just be a standard VCX-100, given the lack of colourful modifications. BUT given then time period since Star Wars: Rebels, paint can fade! We saw the Ghost in Rogue One, and we know it was THE Ghost as we hear on the tannoy calling for “General Syndulla” on Yavin. So for me, this is the Ghost and while I don’t expect to see any of her crew, the fact that it has been included is just another nice little easter egg!

One of the criticisms of the new trilogy has been that we’ve never had all of the main cast together at the same time. Everyone has been spread across the galaxy doing their own thing. I’m not shocked to see this scene, I had a feeling we would get that classic cockpit group shot and even if it wasn’t in the trailer, I would fully expect it to be in the film itself. The look Rey gives Chewie here is such a nice moment. I really hope that the main three get more screen time together.

The Fellowship Is Broken?

We see new character Babu Frik working on C-3P0. He appears to be wired up and plugged into something out of shot. We already saw, in the previous trailer, that 3P0 had red eyes. I feel these scenes connected. He says that he is “taking one last look… at my friends”. This infers that he is, for some reason, about to sacrifice himself. But it could just be a line for the trailer and is more a nod to us, the audience, in terms of adding to that grand finale feel. Whether or not this is C-3P0’s final moment in the Skywalker saga, who knows. But in terms of an emotional trailer moment, it worked!

It is also worth noting that you can also see a Battle Droid behind 3PO as well as a 2-1B Surgical Droid behind Finn.

Return of the Jedis

The previous two films have both followed the plot beats of the original trilogy, and I fully expect this to continue in The Rise of Skywalker. There is going to be a heavy presence of themes from Return of the Jedi in this movie. Be it on the nose, like the Death Star throne room or a more philosophical take in terms of the story. But sticking with this particular shot, I just love it! Seeing this iconic location all broken down and exposed, it just looks so good. It feels really fitting that this location would feature in the finale of the new trilogy, just like it was in the original run.

The Darkside and the Light

I’ve already said I’m very much in the ‘Your Snoke Theory Sucks’ camp, but I can still speculate! Here we apparently see Rey and Kylo working together. They seem to take down a pedestal holding Darth Vader’s helmet. Now, could these be Sith artefacts that they must destroy in order to defeat Palpatine? Maybe. We see Rey holding, what looks like, a ceremonial dagger. It’s unlikely this is used for fighting, so it could be linked with this idea of Sith artefacts. It could also be none of this and something completely different. Either war, I’m very intrigued to see how Kylo and Rey get on.

This is the Star Wars ‘Endgame’ and the size and scale of the film, so far, looks ridiculous. They are leaving it all out on the field, that is for sure! The re-worked Star Wars theme in the final half of the trailer accompanies this incredible crescendo of visuals, and one, in particular, stood out to me. In what feels like a ‘Riders of Rohan’ moment we see a group of characters riding on top of a Star Destroyer. How metal is this? We then cut back and see that epic spectacle of hundreds of Star Destroyers taking off. While The Last Jedi was a more conservative and story-driven affair, you can just see that in this final film in the Skywalker Saga that they are going big and they are going hard!

Please let this be The Emporer on a throne with giant mechanical spider legs that he is operating to move around! Hell, I don’t care if he’s glued a chair to the legs of an AT-ST! I want to see this scuttling, menacing monstrosity closing in on Rey. We are lead to believe that this shot does include Palpatine, given that he is doing the voice over, but it could also be someone else. It could be a force vision, it could be anything. It just looks really impressive and I cannot wait to see the big reveal.

The Tears Will Be With Me

This looks like Rey is preparing for one final, epic fight moment. We’ve seen similar close-ups in both The Force Awakens and The Last Jedi, so it fits the pattern that this a key battle moment. I was already on the verge of an emotional splurge, and I was holding it in, just, all until the final line of the trailer. I was barely hanging on when Luke was saying “The Force will be with you…” but as soon as I heard Carrie Fisher finish the line with “Always”, I was gone. Be it the power of a well-crafted trailer, the fact it would have been Carrie’s 63rd Birthday and just my love of Fisher in general, it all hit me and the tears building up in my eyes decided to make a break for it. The perfect end to an incredible trailer.

What did you think about the final trailer? Let us know in the comments!